A decade into her tenure at Seattle and Seattle Business magazines, photographer Hayley Young looks back at some of her favorite images 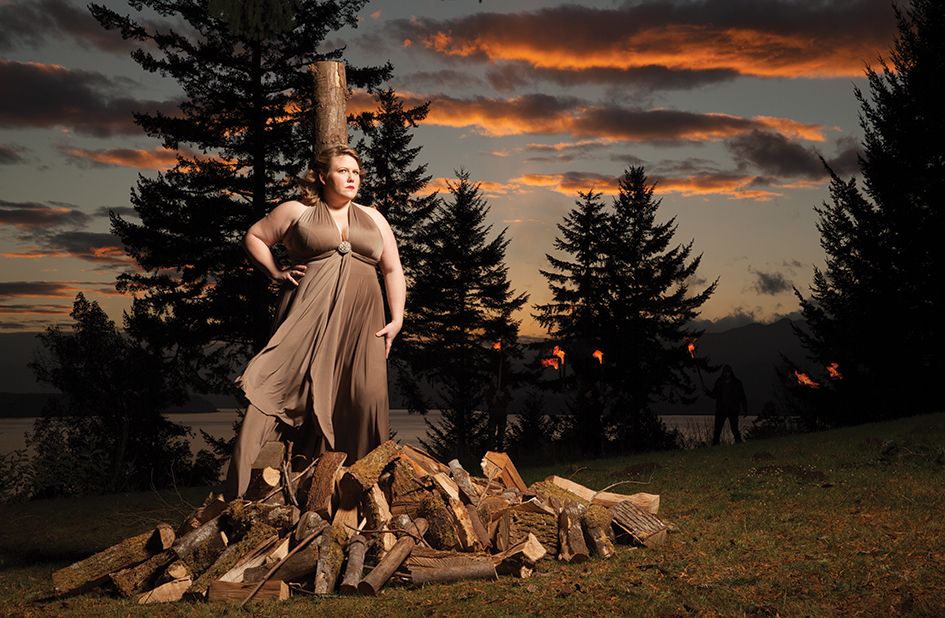 All photographs by Hayley Young

“My assistant, John Vicory, and I drove for hours to pick up the wood stake that we propped behind Lindy for this photo, taken at her family’s property in Quilcene. I had Googled ‘how to make a burning torch’ the day before and collected the needed supplies on our way. Aside from cloning extra flames (provided by her soon-to-be husband and his daughters) to give a sense of more people coming for her, the image you see here is really what we were given. In the time Lindy and I took to prep for the image, the sun began to set. Once we were ready to go, the sky revealed this perfect color palette. It was magic.” “Starbucks gave me 15 minutes with Howard to execute two separate portraits for this cover story. I arrived early, along with our design director, Matt Cole, and a photo intern, to set up a studio backdrop in a conference room on one floor, then clear out the office café on a second floor, placing lights and having everything ready to go. When Howard arrived, we shot for three minutes in one location, walked for five minutes to the next as he chatted with many passersby. I got him seated and focused just long enough to get this last shot before losing him to his team.” “Jen is a powerful woman in the film industry; it was my idea to use a film strip as a tie—a simple nod to a role traditionally filled by men. I prompted her to have a Mona Lisa–esque smile, suggesting she knows something, including more than what might be expected of her.” “I met the entire Taylor family at their offices in Shelton, and they were so amazing. They dressed me up in waist-high boots, and the two sons and their father walked me out to this boat, resting there on the shore because the tide had dropped. It was a perfect place to have Justin sit. The mud was so deep, my gear sank 6 inches.” “This was taken at Sodo Park, and the young chefs were dressed by local store Butch Blum. We sourced props of food, wine barrels and hay; the farm animals appreciated the produce. I remember we were concerned that the implication of animals would insult our vegetarian readers, so we kept them to those that create vegetarian ingredients (eggs, milk, cheese) to avoid insinuating any of them would become dinner.” “I spent the days leading up to this shoot shopping at Goodwill for props, which two close friends, working as our video interns, spray-painted white, while I was running around looking for a wood shop to drill holes for the swing. Thankfully, Woodcraft of Seattle in Georgetown came through for me. This was all happening in a rush before Ben (better known as Macklemore) arrived. The entire scene was built with white seamless paper in an empty office space below our then office in SoDo. Ben’s white suit was provided by Vintage Costumers, an amazing shop filled with a great selection of historical costumes, now relocated to Everett.” Layer up and enjoy the beauty of an unpredictable Seattle Spring