Refind aims to be smart, sustainable and luxurious 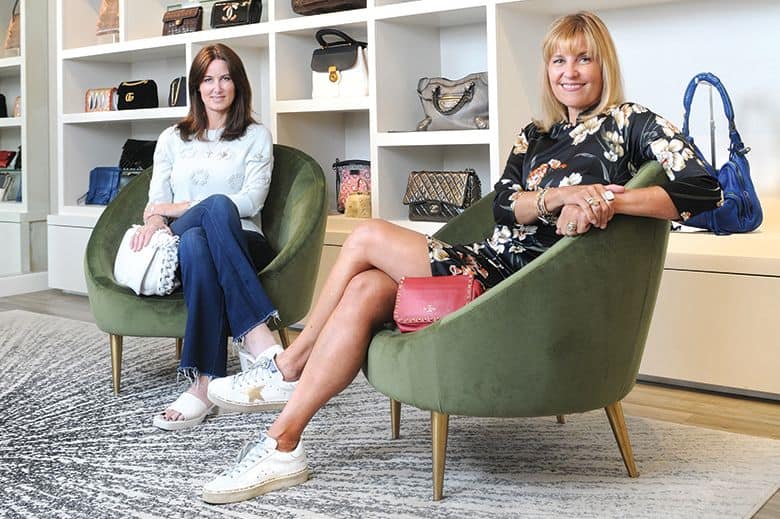 This story appears in the Sept-Oct. issue of Seattle magazine. Subscription information is here.

“Consignment has a little bit of a stigma,” says Pehl, who along with her cousin Jeannine Christofilis opened their store, Refind, at Arboretum Court in Seattle’s Madison Valley neighborhood last fall. “It’s interesting, because when I first started, I actually hadn’t thought about it. I was thinking, ‘I don’t wear other people’s clothes, but I’ll wear these clothes because I know the people that are giving them to me.’”

Unlike stores such as Goodwill or The Salvation Army – which are traditional “donor” stores — the resale market is a sector of the secondhand market that generally includes more curated, higher-end merchandise. Refind usually takes 50% of the sales price and returns the rest to the owner of the goods.

Apparel, shoes, jewelry and handbags are best-selling items, especially either Chanel, Louis Vuitton or Gucci products, which remain the most in-demand brands in the luxury resale market, according to research by online marketplace The RealReal. More than 90% of Refind customers are women, and a surprising number are those in their 20s and 30s looking for quality merchandise at a good bargain. Though Pehl was reluctant to divulge names, she admits that many Seattle VIPs shop at her store.

Pehl’s luxury resale business actually began more than a dozen years ago in her mother’s Queen Anne basement. Pehl had just given birth to the last of her four boys and wanted a part-time, stay-at-home job. The business, she recalls, “just exploded.” Called MB Finds, it became known as Seattle’s “speakeasy of luxury consignment shopping.” “It just took on a life of its own,” she says.

Pehl considered shutting the business last year because it was simply growing too fast, but Christofilis, who has a background in sales and marketing, talked her out of it and came on as a partner. They found physical space and Refind was born.

The timing couldn’t have been better.

The secondhand market is poised to hit $64 billion in the next five years, according to the 2020 Resale Report from ThredUp and GlobalData. It’s expected to overtake the traditional thrift and donation segment by 2024. The report also says that consignment shops are benefitting from a Covid-induced “quarantine clean-out frenzy,” noting that 50% of people are cleaning their closets more than they were prior to the pandemic. Though 82% of Americans have never resold clothing, two of three are now open to it because they want to make money. Seventy percent of women have or are open to shopping secondhand.

“For all the challenges Covid posed to our assumptions about consumer behavior, one thing is clear: Consumers are prioritizing value and accelerating the shift to thrift,” wrote ThredUp President Anthony Marino in the report. “When times get uncertain, we all focus on our family balance sheet. Brands whose core proposition delivers value and convenience have the opportunity to gain share. Amazon, off-price and resale are emerging as winners.”

That’s certainly the case at Refind. Pehl has already hit her financial goals for 2020, even though the store briefly shut at the start of the pandemic. “It’s thriving,” she says. “People still want that handbag or need a new pair of shoes.” Business is generated mostly via longtime, loyal repeat customers and word of mouth. Pehl and her team don’t hesitate to contact customers if they think they’ll be interested in a new item. Social media, especially Instagram, also drive business.

That’s even more impressive considering that Refind only recently launched an e-commerce site. Pehl says customers tend to buy accessories online but are seeking more of a thrill of the hunt experience when it comes to clothing.

“People come into the store because they like to try things on,” she says. “There’s something about the experience of coming in and having a stylist or salesperson give you tips and recommendations. If you think about consignment, everything’s unique. It gets a little overwhelming, especially with the clothing. If you know what handbag you want to buy and you see it online, you’ll buy it, but clothing’s tough.”

Pehl, who employs the equivalent of five full-time workers including herself and Christofilis, says she’s never been suspicious that some merchandise is stolen. It’s estimated that more than $15 billion worth of merchandise is stolen from retailers each year. At Refind, many consigners are longtime customers. Refind also authenticates much of its merchandise, including “every single bag we get,” Pehl says. Refind rejects about 30% of items simply because staffers don’t think they will sell.

The sustainability aspect of resale and consignment is also a selling point, especially for younger customers, Pehl says. Research backs that up. The 2020 Resale Report notes that sustainability is a major driver of secondhand shopping, as 43% of consumers say they plan to shift their spending to sustainable brands. “We’re basically saying to not throw it away,” she says. “It’s treasure to someone. Sometimes I’ve sold the same item five or six times within a few years.”

Pehl caught the retail bug early. She’s one of six kids and her “mother loved to shop,” she recalls. She began thinking of luxury resale while working at Nordstrom as a teenager. She began her career in international sales and marketing and helped launch an online boutique, which is now a small, high-end brick-and-mortar chain in San Francisco called HeidiSays Collections that sells designer fashion and high-end jewelry.

“I would have stayed in international business, but I had kids. But there’s always been something about retail,” she says. “I’m not surprised that I’m back in retail. Everything just came together in this particular equation.”

Much like her merchandise, Pehl has found a new life.

The Pursuit of Nobility: Interview with Lenny Wilkens

One of Seattle’s greatest sports icons eyes return of NBA

On a recent edition of three-time Emmy-award winning sports TV talk show “Pardon The Interruption,” cohost Michael Wilbon heaped lavish praise on NBA legend and Seattle icon Lenny Wilkens in celebration of his 85th birthday.  Wilbon noted that he’s a “basketball Hall of Famer three times over” [as a player, coach and assistant coach of…

Back Page: Summer of Turmoil

The summer of 1969 was a time of significant unrest for the entire nation, and Seattle was no exception. In August of that year, thousands of teenagers from across Seattle rioted in the University District for several nights. Writing in Historylink.org, authors Alan J. Stein and Walt Crowley noted that “promptly at 10 p.m. [on…