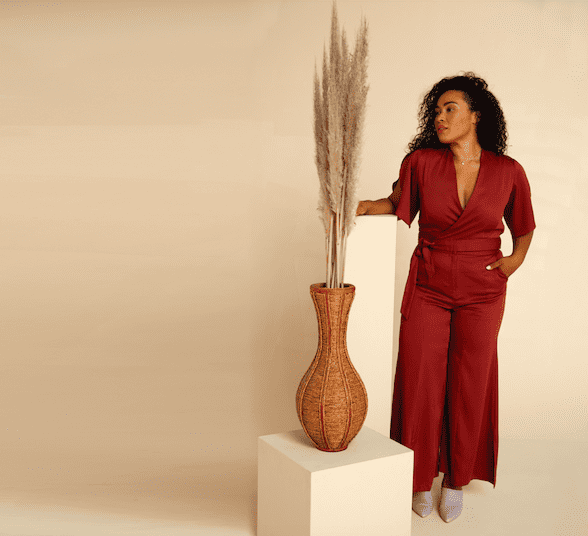 This article is featured in the March issue of Seattle magazine. Subscribe here to access the print edition.

Its no secret that the women’s plus-size clothing market is booming. Last year alone, its value in the United States reached a staggering $9.85 billion, according to data analytics firm Statista. At the same time, 60% of respondents say they would opt for sustainable fashion if it were as affordable as other apparel.

“The products should have meaning and not be disposable,” Klein writes on the company’s website. “We started this business to provide quality apparel, made from eco-friendly materials, with designs that reflect all our beautiful shapes and sizes.”

The clothing is manufactured in Los Angeles. The debut collection features five styles available in multiple colorways and is size inclusive (XXS-XXL) with sizes 3x and 4x coming this spring. The overwhelming majority of fabrics are plant-derived, and all packaging is fully recyclable and/or compostable.

Klein, who is also an advertising executive at Amazon, has spent a decade in the fashion industry and studied at the Fashion Institute of Technology. She says 1% of all profits will go to an environmental nonprofit called 1% for the Planet.

John Howie may never set foot in your home, but if you’re house hunting, you could cook in a kitchen inspired by the acclaimed Seattle-area chef and restaurateur.

Connor Homes, one of the region’s oldest and most prolific homebuilders, is collaborating with Howie to create John Howie Signature Kitchens inside new construction homes in Kirkland’s Holmes Point neighborhood. Howie designs the kitchens “to bring the extravagance” of his ideal kitchen to the homes.

“I’ve spent the past few months sketching kitchen ideas alongside some of the greatest minds in home development to design innovative features for future homeowners,” Howie says.

The Price is Right

Used cars in the Seattle area are among the most affordable in the U.S.

Now is a good time to buy a used car.

Used cars in the Seattle area are significantly cheaper than in the U.S. as a whole. The average price of a used car in Seattle rose 2.64% between June and December last year, as opposed to the nationwide average of 4.9%, according to an analysis of 1.3 million used car list-ings by CoPilot, an online used-car marketplace.

Buyer beware, however, if you’re in the market for a Ford F-350 Super Duty truck. At 17.6%, that model had the largest price increase in the Puget Sound region. Nationwide, truck prices in general rose the most at more than 12%. The price of passenger vans plummeted 4%, as demand dropped because of social-distancing guidelines.

Salt Lake City is the most expensive used-car market, with an average price hike of 7.37%.

Jake Shellum delivered necessary items to locations across the country in his job as a long-haul truck driver. Chef Cody Crawford began working 15-plus hour days to provide for his family after his wife lost her job.

They are three of the eight individuals or organizations appearing on Seattle-based Jones Soda’s green apple soda bottles as part of the company’s “Unsung Heroes” campaign. The limited-edition collection hit store shelves earlier this year.

The soda company says it received “a flood of amazing photos and stories” when it asked for submissions. Jones also teased on its website that it may recognize heroes on future labels.

Jones has long been known for its creative approach to marketing and advertising. Company products are often sold in unusual venues, including music and sporting goods stores, and it recently used its bottle labels to convey Covid-related messages of hope and to encourage voter registration. It even allows customers to create their own bottle labels via a section on its website.

The Future is Sustainable

Beech Tree Woodworks, founded 20 years ago, finished in first place of the “Residential Other” category in the annual PureBond Quality awards held by Columbia Forest Products. Columbia is the largest manufacturer of hardwood veneer and plywood in the United States. Privately held Columbia is headquartered in Greensboro, North Carolina.

“Once they hear about those qualities, they’re sold on the product. I can’t think of a single case where someone has gone to a different product to save a dollar or two.”

Frustrated with Yelp, Jessica Blakeslee took things into her own hands.

The 2020 graduate of University of the Pacific in Stockton, California, moved back to the Seattle area after earning an engineering degree and promptly launched SeeingSeattle.com, a website that showcases places to eat, drink and explore.

There are no shortages of websites with similar information – Open Table, Yelp and Eater Seattle are but a few – but Blakeslee insists her user interface is simpler and easier to navigate. It took her about a week to create the site through website building and hosting company Squarespace.

Blakeslee, a four-year guard on the University of Pacific basketball team and a West Coast Conference All-Academic member, initially populated the site herself but then relied on friends and family to help. Users have since added their favorites as well.

Digging into the analytics is her favorite part: She says she receives about 2,000 page views per week; one user was from as far away as South Africa. Site visitors can even buy Blakeslee a cup of coffee.

For now, Blakeslee says the endeavor is just a hobby, but her next step is to sell advertising.

“It’s just fun for me, and a lot of these local restaurants are strug-gling,” says Blakeslee, who won the 2020 Pacific Athletics Four Pillars Award for exemplifying each of the university’s four core identities: family, balance, winning spirit, and innovation. “Once the pandemic is over it will be fun to try new restaurants with friends.

She’ll have no problem deciding where to go.

What’s In a Name?

Subtle change points to the growth of Washington’s wine industry

It doesn’t seem like a lot: A minor name change and a new logo. But to those involved in the Walla Walla wine industry, the subtle changes point to a region coming into its own.

The new logo, developed by Seattle creative marketing agency GreenRubino, represents the first brand refreshment since 2008. The color in the logo is inspired by the oxidized iron found in ba-salt, a “foundational element” of the region’s terroir.

The new branding includes changes to the organization’s website and social media channels, and offers expanded visitor information. It also includes the wine guide, which is available in both print and digital formats.

The Pursuit of Nobility: Interview with Lenny Wilkens

One of Seattle’s greatest sports icons eyes return of NBA

On a recent edition of three-time Emmy-award winning sports TV talk show “Pardon The Interruption,” cohost Michael Wilbon heaped lavish praise on NBA legend and Seattle icon Lenny Wilkens in celebration of his 85th birthday.  Wilbon noted that he’s a “basketball Hall of Famer three times over” [as a player, coach and assistant coach of…

Back Page: Summer of Turmoil

The summer of 1969 was a time of significant unrest for the entire nation, and Seattle was no exception. In August of that year, thousands of teenagers from across Seattle rioted in the University District for several nights. Writing in Historylink.org, authors Alan J. Stein and Walt Crowley noted that “promptly at 10 p.m. [on…