A mild-mannered chronicler of the famously flinty releases his second brawny book. 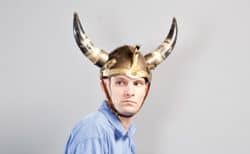 If you took a history textbook, injected it with tiger adrenaline, dipped it in molten lava and encased it in armor, you still wouldn’t come close to the level of badass found in Seattle author Ben Thompson’s collections of essays. Thompson’s blog, BadAssoftheWeek.com, led to his 2009 book, Badass: A Relentless Onslaught of the Toughest Warlords, Vikings, Samurai, Pirates, Gunfighters, and Military Commanders to Ever Live, detailing the hard-core adventures of history’s mightiest figures. In his new book, Badass: The Birth of a Legend: Spine-Crushing Tales of the Most Merciless Gods, Monsters, Heroes, Villains, and Mythical Creatures Ever Envisioned (HarperCollins, $16.99), the 31-year-old tells tales of fictitious toughness.

NAME: Ben Thompson
OCCUPATION: Writer
DAY JOB: Administrative assistant at a Seattle hospital
DOWNSIDE OF WRITING ABOUT BADASSES: “I’m less badass now—it’s a lot of reading, writing and research.”
ON BADASS WOMEN: “For every Joan of Arc there are probably three equally badass women whose stories just didn’t get recorded.”
PARENTAL ADVISORY: “If your kids are old enough for a book with ‘ass’ in the title, they can handle it.”
READING: 3/24, 7 p.m. at University Village Barnes & Noble

SM: How did all of this start?
BT: My dad has this collection of historical weapons—swords, Civil War rifles and everything—and he would tell all these awesome stories about them. Then, when I was studying history in college, I realized how boring the textbooks and lectures were making everything. The blog started out as a joke for my friends, and the next thing I knew I was getting 1,000 to 5,000 hits per day.

SM: What’s the primary trait of a badass?
BT: Determination. Some of these people are heroes, some are villains—what unites Joan of Arc with Genghis Khan is that they did what they wanted or thought they needed to, and didn’t let anyone get in their way. I think deep down everybody wants to be that way. It’s reassuring to see people who actually go out and accomplish what they want to do.

SM: Are your books educational?
BT: It’s a history book that’s as far away from a real history book as possible, but I put a lot of research into whoever I’m writing about. High school, middle school and even college kids e-mail me all the time and say, “I hated history class, but I love your book.”

SM: What’s the most badass thing about Seattle?
BT: People are in way better shape than any place I’ve ever been. I tried to go up Mount Si when I first moved here, because all the websites said it was easy and anyone’s grandma could do it. It kicked my ass. I was dying and sweating, and people were running past me with kids and water jugs strapped to them, smiling and waving.