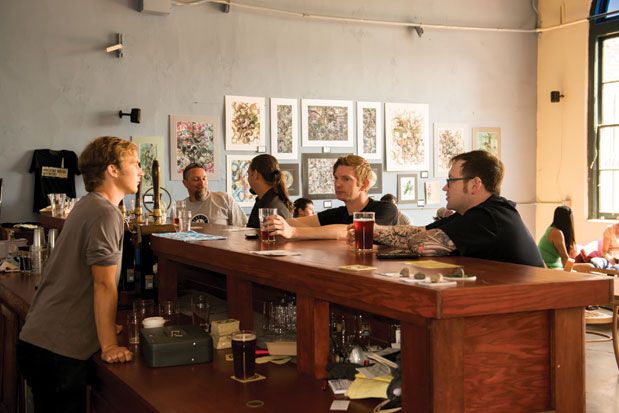 Along airport way south in georgetown a giant, beautiful, old brick building dominates the east side of the street. Originally home to Seattle Brewing and Malting Company, this is where Rainier Beer was born in 1884 and died in 1917 with Washington’s enactment of Prohibition. In 1935, Seattle’s most iconic beer brand was reborn farther north in the building that most people think of as the Rainier Brewery in SoDo—the structure that was for so long crowned with the red script “R,” along I-5 (now Tullys headquarters). Today, seven breweries dot the map between Safeco Field and Boeing Field, Beacon Hill and the Duwamish Waterway, the boundaries of the Georgetown/SoDo brewery district. Elysian Brewing’s new, large production facility (not open to the public) is also located here. Use a car or taxi for your expedition in this industrial, sprawling brewery district; weekends offer less traffic than the hustle and bustle of the after-work crowd midweek. For north-end breweries, proximity to the stadiums means youll find barstools occupied by jersey-clad fans. Kids are welcome at most of the tasting rooms. 1 Emerald City Beer
3100 Airport Way S
Settle in at the Beer Lab—the tasting room of Emerald City Beer. This is an industrial space in the old Rainier Brewery building, so expect nothing fancy, just snacks and good beer surrounded by Seattle brewing history. At the Beer Lab, Emerald City Beer uses a small-batch brewery to produce new creations one keg at a time, which supplement its regular offering, Dottie’s Seattle lager, the brewery’s flagship beer, which is brewed in large batches at another, larger brewery offsite. The Emerald City Beer gang has been known to throw some outrageous tailgate parties before Seahawks games, so football fans should keep an eye on its website or find it on Facebook. While you’re there, try a Dottie’s on draft, typically found only in cans. If the place isn’t too busy, ask Rick Hewitt (owner/brewmaster) if you can take a peek at the old Rainier conditioning tanks that still haunt the deep interior of the building. Wednesday through Saturday, hours vary. 21 and older only.

2 Georgetown Brewing
5200 Denver Ave. S
The home of Manny’s Pale Ale is always busy, but it hardly qualifies as a tasting room. Manny Chao and Roger Bialous don’t serve food or pints of beer at their brewery; they just pour samples to help you decide which of their beers you want to take to that big party (growlers and kegs of all size available to go). Still, it is something of a pilgrimage for local beer fans to visit the birthplace of Manny’s. Be sure to try the Chopper’s red ale, as well as any special, seasonal beers they’re pouring. Open Monday through Saturday, hours vary.

3 Machine House Brewery
5840 Airport Way S, No. 121
Expect nothing but serious English-style ales, hand-pumped without carbonation directly from the cask, and you will not be disappointed. This brewery is located in the original Rainier Brewery building—sacred ground in Seattle beer history. It can be tricky to find, so aim for the smoke stack at the south end of the building. Tucked neatly into its gritty, industrial surroundings, this cozy and comfortable brewery and tasting room is where you’ll find hard-core beer geeks seeking a style of beer that few local breweries produce. Try brewmaster/owner Bill Arnott’s Dark Mild ale or the Best Bitter for an authentic taste of England (read more about Arnott on page 114). They don’t serve food here, but there are a number of restaurants across the street on Airport Way. Open Friday through Sunday, hours vary.

4 Epic Ales
3201 First Ave. S, Suite 104
The space might be small but the ideas are huge at Epic Ales, where brewmaster Cody Morris is not shy about using ingredients that sometimes frighten less adventuresome imbibers. Don’t be afraid of beers featuring ingredients such as spruce tips and Szechuan peppercorns; go there willing to be surprised by unique flavors not typically associated with beer, but well suited to be paired with food, which is available at Epic Ales’ brewpub Gastropod (see page 54 to learn more about the food and beer experience there). Open Tuesday through Saturday, 4–10 p.m. 21 and older only.

5 Schooner Exact Brewing
3901 First Ave. S
If you’re lucky, they’ll be pouring one of their rare, barrel-aged concoctions when you visit (see page 116); otherwise, enjoy one of the many other beer choices in this bright, pleasant tasting room, which recently added a kitchen (see page 54 to learn more about the food and beer experience). Marvel at the towering stainless steel tanks and know that just a few years ago the owners were brewing one keg at a time in an Active Space unit. Matt McClung,  co-owner and brewmaster, formerly taught high school chemistry, and his beers are made with the kind of care and precision you’d expect from someone well acquainted with the scientific method. He is also rapidly gaining a reputation for his barrel-aged and sour beers (see pages 112 and 116). Matt’s wife and the brewery’s co-owner, Heather McClung, left her career as a kindergarten teacher to run the day-to-day business operations. Open daily for lunch and dinner, 11 a.m.–9 p.m.

6 Seapine Brewing
3828 Fourth Ave. S, Suite 2
This diminutive brewery and tasting room opened in 2012 across the street from Seattle City Light on Fourth Avenue S near Costco. Look for the red awning and the sign above the door, then step inside and order a PNW pale ale. You won’t find food here, but you will discover one of Seattle’s newest breweries and will likely run into Drew Colpitts (brewmaster and owner). Open Saturday noon–4 p.m., with plans to be open on Thursdays and Fridays.

7 Two Beers Brewing
4700 Ohio Ave. S
The Woods tasting room at Two Beers Brewing is especially popular with the after-work crowd, though weekends see plenty of traffic as well. When weather permits, the west-facing loading dock doubles as a beer garden bathed in afternoon sun. Small, individual-size pizzas are available, but otherwise, you should consider this a pit stop on your way to dinner, perhaps in nearby Georgetown. Originally introduced as a summer seasonal beer, the Trailhead India session ale is a crowd favorite year around. Owner Joel VandenBrink recently opened a cidery next door (Seattle Cider Company), so this tasting room also offers options for your gluten-free companions. See more about the cidery, Seattle’s first since Prohibition, on page 62. Open Tuesday–Friday 3-8 p.m., Saturday 1-6 p.m.