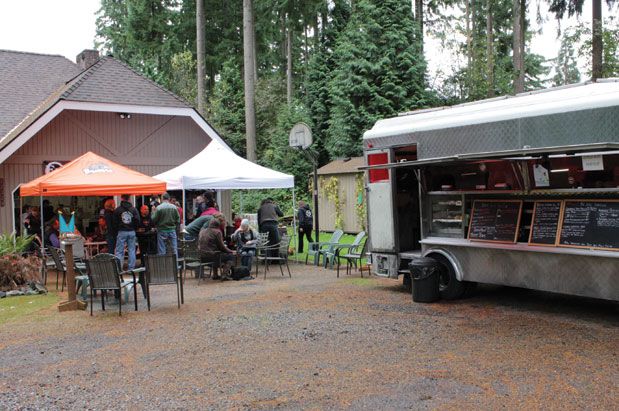 Most people associate Woodinville with wine—after all, it is home to more than 100 wineries—but these days, more people are chasing their Pinot Gris and Merlot with fresh, local beer. Woodinville is now home to six breweries, which are often crowded with oenophiles seeking refuge for their wine-soaked palates. The best way to conduct a beer tour in this unexpected brewery district is to treat it just as you would a wine-tasting adventure: secure a limousine, party bus or designated driver. Put on your plastic tiara and head out for a beer-themed bachelorette party. Today, Woodinville proves that wine and beer can coexist in close proximity, so consider mixing it up a bit by visiting three wineries and three breweries. Kids are welcome at all of these breweries. 1 Brickyard Brewing
5817 238th St. SE, Suite 3
Tucked away in the back corner of an industrial park in northeast Woodinville, Brickyard Brewing offers a quiet and comfortable tasting room slightly removed from the wine-touring traffic. It has a limited food selection, which is brought in—from tacos on Thursday to hummus platters on Sunday—so you’ll be pleasantly surprised if you show up expecting to find only the beer waiting for you. Consider challenging brewmaster Joe Montero to a game of backgammon while you are at the bar; he took the game up on a board that came with his purchase of the bar. The room feels like a miniature tavern, where seating for about 30 people has been tucked into a no-frills space. Climb onto one of the high-backed barstools and enjoy what are described as “American-style ales,” such as the Masonry oatmeal stout, which pairs nicely with one of the pulled pork sliders on Fridays. Open Thursday through Sunday, hours vary.

2 Dirty Bucket Brewing
19151 144th Ave. NE
Don’t let the name fool you: There is nothing unsightly or unsanitary about this small brewery and tasting room. Order a beer at the bar and then find a seat in the front room or somewhere in back near the brew kettles. A glass garage door opens to the parking lot, providing lots of fresh air and outdoor seating when the weather allows. Dirty Bucket Brewing is very much a family affair; you will often find the owner Steve Acord mentoring his son on the art of brewing. They don’t serve food (although Shake ’N Go across the street delivers food to your table), so you’ll have to be content to simply drink a Filthy Hoppin’ IPA or one of Acord’s other creations. Thursday-Friday 4–9 p.m., Saturday noon–8 p.m.; Sunday, noon-5 p.m.

3 Foggy Noggin Brewing
22329 53rd Ave. SE
Located in a neighborhood between Bothell and Woodinville, this establishment is made up of a backyard shed where the beer is brewed, a garage that has been converted into a tasting room, and a driveway that doubles as a beer garden. Neighbors and wayward beer adventurers relax in a random collection of mismatched patio furniture, enjoying pints of Bit O’Beaver English bitter and Christmas Duck porter. The brewery is open on Saturday afternoons only, so the neighbors don’t get too fussy as long as you drive slowly and don’t block any driveways. On occasion, you’ll find a food truck in the driveway as owner and brewmaster Jim Jamison and his wife, Kim Jamison, serve the beer (a son, son-in-law and daughter help with brewing, deliveries and cleaning kegs). Simply put, there is nothing else like it in the area: It’s a suburban brewhouse.

4 Redhook Ale Brewery – Forecasters Pub
14300 NE 145th St.
Redhook moved from Seattle to Woodinville nearly 20 years ago and until recently, Forecasters Pub stood as a monument to an era—hopelessly stuck in the 1990s. At long last, the expansive space was remodeled in the spring of this year and is now beautiful and contemporary. The kitchen pumps out all sorts of pub grub to complement the full array of Redhook beers and to feed hungry families, beer tourists and wayward bicyclists using the nearby Burke-Gilman Trail. While you’re there, why not order something that is only available at the pub, such as Big Ballard Imperial IPA, an homage to the brewery’s humble origins in Seattle. Open daily for lunch and dinner, hours vary.

5 Triplehorn Brewing
19510 144th Ave. NE, No. 6
The wine tourists call it the “Warehouse District,” so as you drive down the road on which this brewery is located, you’ll see multiple sandwich boards advertising wineries. Pay close attention and you’ll see one advertising a brewery: Triplehorn Brewing. Turn into the parking lot and continue to the top of the hill. When you enter the place, you will be surprised to find such a small bar and tasting room in such a huge building, but continue past the bar to the brewery, where you’ll discover plenty of space and several tables surrounded by glimmering stainless steel brewing equipment. Order a sampler tray to enjoy tastes of six different beers brewed by brothers Ray and Rich Nesheim (also Triplehorn’s owners) or reach for one of their barrel-aged beers—a style for which this brewery is quickly gaining a reputation. They focus on the beer exclusively here, so don’t expect any food. Open daily, noon–9 p.m.

6 Twelve Bar Brews
12826 NE 178th St., Suite C
Need a new pair of pliers or something else from the hardware store? McLendon is right across the street from this brewery, so use it as an excuse to visit and imbibe a brew. Like most of the other Woodinville breweries, this one occupies a spot just off the 522 exit. The tasting room here is particularly small, and the brewers make no bones about the fact that this is a production brewery first and a retail space second—you can try the beers and fill growlers, but that’s it (no food). The brewery’s unusual name is a pun on the term “12-bar blues,” the root structure behind most blues and rock music, and all of the beers have names that may only be familiar to musicians as well. Kirk Hilse, the founder and head brewer, is a bass guitar player. Rock out with a Supertonic India black ale for a taste of something dark and hoppy. Open Friday and Saturday noon–7 p.m., Sunday noon–4 p.m.

WOODINVILLE’S NEW BEER BAR
They met at a friend’s divorce party and quickly became pals, in part because of their mutual interest in beer. That shared enthusiasm also led Kat Stremlau and Jan Newton to open a beer bar in Woodinville last December. The Collective On Tap (Woodinville, 17802 134th Ave. NE) is located in the former home of the Tot Spot Café, a mom-friendly bistro that offered a playspace for toddlers, not tipplers. You will no longer find children playing, unless they’re older than 21, but you will find grownups enjoying a carefully chosen selection of more than 40 rotating draft beers, including several from Woodinville’s six breweries, all accompanied by small plates prepared in a fryer-free kitchen. A small selection of bottles is available, but the focus here is on local draft beer (hence, On Tap).To say this place has a woman’s touch would be an oversimplification; what sets it apart is respect for the beer as well as the environment in which people drink it. The décor is stylish and comfortable, and details have been thoughtfully considered, but the beer still rules the roost. Stremlau and Newton have proven that beer can be casual and fun—but also a little bit sophisticated.