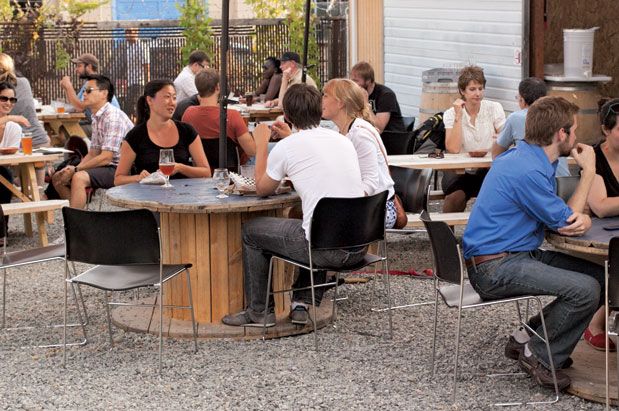 When Redhook Ale (now in Woodinville) opened its original brewery 30 years ago in Ballard at the corner of Leary and Ballard ways—not, as you might think, in the Fremont location where Theo Chocolates now resides—no one would have imagined the neighborhood would one day be home to several breweries, most of which are less than 2 years old (with another one planned to open very soon). Like other Seattle area brewery districts, the relatively affordable real estate of industrial and commercial zones near thriving residential areas has fueled growth. Thirsty young adults with families and even thirstier night-crawling hipsters surround Ballard’s industrial backbone. Some folks ride bikes or push strollers from brewery to brewery and some flock from other neighborhoods to experience the brewery buzz firsthand. Hotel Ballard, a slick new hotel that opened last spring, can now accommodate those seeking an overnight adventure. Check with individual breweries for hours of operation. Unless otherwise noted, kids are welcome. Also, check out this KUOW segment on the Ballard Brewery District. 1. Populuxe Brewing
826-B NW 49th St.
Populuxe has perhaps the most neighborhoody feel of Ballard’s breweries. A small indoor seating area is complemented by a larger courtyard that offers plenty of picnic tables and lots of room for the little ones to expend energy while parents look on. Expect to see strollers, kids and dogs aplenty when the weather is agreeable. Peter Charbonnier and Jiri Zatloukal (owners and brewers) are always pouring new and interesting beers, but tend to give extra attention to session beers (those lower in alcohol and therefore more appropriate for drinking sessions). Open Thursday through Saturday, hours vary. No food, but on Friday and Saturday, you’ll share the courtyard with one of Seattle’s food trucks.

2. Reuben’s Brews
1406 NW 53rd St.
This brewery is popular with the folks in the neighborhood, but it also attracts beer geeks from far away. Adam Robbings, owner and brewer at Reuben’s Brews, is a transplant from England who began winning awards for his beer almost immediately after opening Reuben’s in the summer of 2012. The crowds at the tasting room reflect the critical success and seem to appreciate his uncommon affinity for using rye malt in his brews. You may wonder how beer is brewed in this cramped warehouse/garage space (the brewery and tasting room occupy the same space), but the trick is the convertible furniture that is stowed away while the magic is happening. Consider reaching for the Imperial Rye IPA, one of brewery’s most highly decorated beers. While Reuben’s focuses entirely on the libations, food trucks occasionally provide dining options. Open Thursday through Sunday, hours vary.

4. Peddler Brewing
1514 NW Leary Way
Bicycles are the theme at this brewery and tasting room, located in the former home of Maritime Pacific Brewing. You’ll find plenty of places to lock up your two-wheeler, including an indoor bike rack, and lots of seating. A wall of south-facing windows generously illuminates the room with natural light. Consider trying your hand at a game of cornhole—a beanbag game. Tossing the bag with one hand, leaves the other free for holding, I would suggest, a caramel ESB. Co-owners Haley Woods and David Keller (also brewer) don’t serve food, so bring your own or stop by before or after dinner. Open Thursday through Saturday, hours vary.

5. Hilliard’s Beer
1550 NW 49th St.
This no-frills, spare, cream-colored tasting room—featuring an eclectic mix of repurposed furniture (giant electrical-cord spools serve as tables) surrounded by brewery and canning equipment—is frequented by families and hip urbanites, perhaps leaning a bit more toward the latter. There is a pool table and a small stage, which often accommodates live music, but no kitchen. However, food trucks appear regularly though without any firm schedule. Many beer lovers around Seattle are familiar with Hilliard’s Saison, but we recommend trying one of its other beers, such as the Nautical Reference pale ale. Ryan Hilliard, owner and brewer, is committed to making less-common styles of beer, vowing to never brew an IPA (India pale ale, the most common and popular style of beer these days). Open Thursday through Sunday, hours vary.

6. NW Peaks Brewery
4912 17th Ave. NW, Suite B
Located at the corner of NW 50th Street and 17th Avenue NW (on the same block as Hilliard’s), this pint-size beer stop is easy to miss, and the compact space is a bit challenging for parents with kids in tow. Most beer lovers think of it as a place to fill growlers; however, you are welcome to stick around. If you do, you’ll likely be hanging out with the head brewer and owner, Kevin Klein. Let him direct your beer choice, but consider the Redoubt red ale. There’s no food served here, but there are plenty of restaurants nearby and you’re welcome to bring food in, although you’ll be pressed to find space to sit down and eat it. Open Thursday through Sunday, hours vary.

7. Urban Family Brewing
5329 Ballard Ave. NW
Unlike the other breweries in the area, this one is in the heart of Ballard on Ballard Avenue, one of the city’s hottest nightspots. Three friends—David Powell, Timothy Czarnetzki and Sean Bowman—all relocated to Ballard as adults, from different parts of the country, and united in their new hometown to form their own urban family and create Belgian-style ales. The crowd here reflects the location—a wide variety of clientele, some looking for a family-friendly spot to grab a beer before taking the kids home to bed, others looking to get things started before a night on the town. The brewpub offer snacks and burgers. For a hoppy treat, with plenty of citrus notes, reach for a Low Hangin’ Fruit IPA. Unlike most of the breweries in Ballard, Urban Family Brewing supplements its own creations with select beers from other breweries. Open Wednesday through Sunday, hours vary.