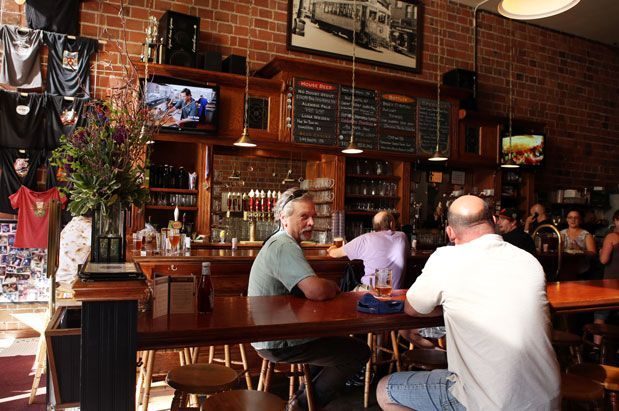 Elliott Bay Brewing
The original Elliott Bay Brewing location (Elliott Bay Brewery & Pub) in West Seattle opened in 1997 and has always been the kind of place where customers and servers know each other by name and maybe even attend the same Zumba classes. It is a welcoming, comfortable and kid-friendly neighborhood pub that just happens to brew its own beer. Its other two locations are much the same, and you’ll find a similar menu and the same commitment to great service at the Elliott Bay Brewhouse & Pub, which opened in Burien in 2009, and the Elliott Bay Public House & Brewery on Lake City Way, which opened in 2012. Picking a top spot among the three is a bit like picking your favorite child: It’s easiest just to love them equally. In West Seattle, the locals chow on fish tacos and hamburgers made with all natural beef, and favor a dry-hopped IPA to wash them down. In Burien, order a B-Town Brown ale along with sweet potato gaufrettes: waffle-cut sweet potato fries tossed in spices and served with house-made dark cherry ketchup and chipotle aioli for dipping. At the Lake City Way location, consider ordering the house-smoked Sloppy Joe along with a Lake City IPA. Each pub has its own brewery, but they do share beer among all three locations. For the most part, you can only get Elliott Bay Brewing Company beers at its pubs. All three locations open for lunch and dinner daily; Burien and Lake City Way also serve brunch on weekends. Burien, 255 SW 152nd St., Suite B, 206.246.4211; Lake City Way, 12537 Lake City Way NE, 206.365.2337; West Seattle, 4720 California Ave. SW, 206.932.8695; elliottbaybrewing.com

Elysian Brewing Company
Elysian Brewing opened its original brewery and pub on Capitol Hill in 1996 and has since added two more locations to its family of brewpubs. In 2003, Elysian Tangletown opened in a small, largely unknown business district north of Wallingford and southeast of Green Lake. Located across the street from CenturyLink Field, Elysian Fields opened in 2006 and is regularly packed with sports fans on game days. The star of the show at all three locations is the company’s massive selection of great beer. While many Elysian brews are widely available at other pubs, bottle shops and grocery stores, there are always special treats available at the brewpubs that can be found nowhere else. The original brewpub on Capitol Hill is still most people’s favorite, offering the full complement of Elysian beers, a diverse menu and great people watching in one of Seattle’s most vibrant neighborhoods. As at Elysian’s other locations, the Elysian Fields menu offers a standard range of pub fare, so you’ll have no problem finding a dish to pair with your pint of Avatar Jasmine IPA or any of the other Elysian beers you’ll discover waiting for you. The Oasis Platter rarely disappoints and includes fresh veggies, olives, Mama Lil’s peppers, pita, house-made hummus and baba ghanoush. Kids are welcome at all three locations. Lunch and dinner daily. Capitol Hill, 1221 E Pike St., 206.860.1920; Tangletown, 2106 N 55th St., 206.547.5929; Pioneer Square, 542 First Ave. S, 206.382.4498; elysianbrewing.com

Go back to our full Best Brew Pubs listings.