Popping up as quickly as Craftsman knockoffs in the 2000s, contemporary homes are having a moment 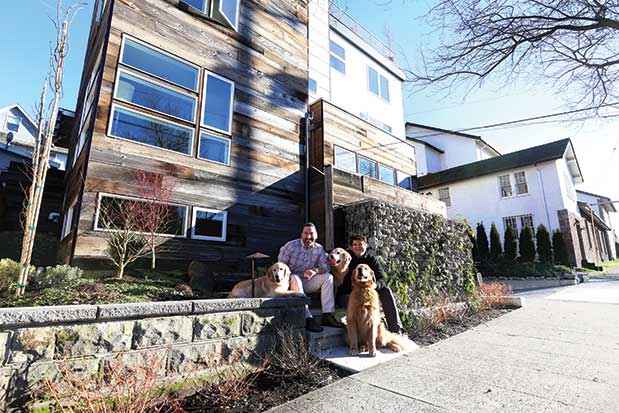 Over the past decade, Seattle’s idea of the new home has shifted.

Homeowners are trading in spacious front porches and ample front yards for rooftop decks and zero lot lines. Ornate cornices and elaborate trim work have given way to clean lines and simple details. In short, the ubiquitous Craftsman—even the supersize replicas that were the new home construction of choice in the late 1990s—has had its day. These days, Seattle’s home du jour incorporates a clean aesthetic and a deep functionality, with a focus on reclaimed materials and off-the-charts energy efficiency. These homes are often taller than they are wide, boxy without feeling overbearing, and made with a thoughtful combination of exterior finishes that set them apart from their more traditional neighbors.

Christopher Ross, 51, an independent marketing and business strategy consultant, and Andre Bazire, 52, who works at Microsoft—along with their three golden retrievers—moved into one such contemporary home in Columbia City in July. Their new, 3,200-square-foot, four-story house a block off Rainier Avenue stands out in a neighborhood of mostly single-family homes and older apartment complexes. The exterior is a mix of fiber-cement siding and reclaimed barn wood, its elevations offset by subtle color changes in the materials. Articulating windows in the kitchen flood the space with light, and nearly floor-to-ceiling glazing in the main level’s living area gives way to a sweeping view of the neighborhood and downtown Seattle in the distance. The sight lines only get better as you go up.

The heyday of the modern house comes at a time when homeowners are drawn to energy efficiency and “green” construction, and many of these homes deliver. Today’s home buyers like the crisp, clean lines often associated with such homes, says Anthony Maschmedt, whose Columbia City firm, Dwell Development, specializes in modern, sustainable urban residential development.

“Today’s buyers are well educated in building efficiency,” says Maschmedt, whose residences—including Ross and Bazire’s home—all meet the rigorous Built Green 5 Star third-party-verified rating of the Master Builders Association of King County’s Built Green building program. “They do their homework and study what works in construction and what doesn’t. It’s not all about neighborhood or house size or status.” Ross and Bazire list the sustainable attributes of their contemporary home: triple-pane windows, passive air, hydronic heating, reclaimed wood, and 10-inch-thick walls filled with blown-in cellulose insulation that dampens noise from the outside as well as from floor to floor.

The couple feels they have the best of both worlds: the comfort and convenience of a new, modern home without the heavy carbon footprint that often comes with it.

“As a consumer, it feels good to be part of a wave of homeowners who are creating demand for this type of home, which will hopefully translate to more of them being built,” Bazire says.”