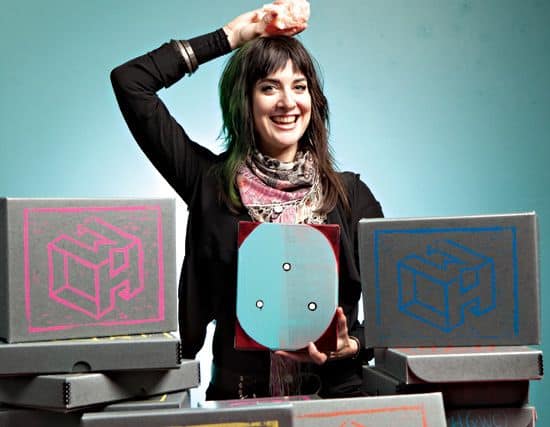 We’re all familiar with the mutual benefits of community supported agriculture (CSA): Farmers get a guaranteed customer base, and subscribers get a box of fresh, locally grown produce delivered on a regular basis (and along with it, the satisfaction of eating sustainably). It’s a win-win.

So what if the A in CSA stood for art?

“Buying local is as important for art as it is for agriculture,” says Sharon Arnold. The 36-year-old Seattle artist is applying the principles of environmental sustainability to the art world with her recently launched art-subscription project, LxWxH.

Arnold noticed that her artist friends were complaining about how hard it is to get work into people’s homes; at the same time, other friends were lamenting that art was “inaccessible,” because of high prices and the intimidating “white cube” gallery vibe. In an effort to bridge this gap, Arnold created LxWxH.

The name refers to the container subscribers receive—a sturdy, block-printed 12-by-9-by-2-inch box containing two original works by Seattle visual artists and an essay by a local literary or arts writer.

Subscribers pay $700 for a year’s worth of “issues” (six total, released every other month) and, as with a CSA, can choose doorstep delivery or pickup at a designated time and location. (Boxes can also be purchased without a subscription, for $130 each.) In case you haven’t shopped for art lately, 12 original pieces of art for $700 is an incredible bargain.

Limited editions add to the appeal—only 20 copies are made per issue (plus three more given to the participating artists and writer). The element of surprise increases the fun further—subscribers are told which local artists are participating shortly before each issue releases, but they have no idea what artwork will appear, especially since some artists make different pieces for every box.

Joey Veltkamp, a multidisciplinary Seattle artist who painstakingly created 23 distinct drawings for LxWxH’s inaugural issue in March, says, “Art in a box is about the most simple way to begin collecting artwork that I can think of. It reminds me of Aspen [a boxed multimedia magazine from the 1960s that featured work by Andy Warhol, Susan Sontag, John Lennon and others], and it’s exciting to be involved.”

Amanda Manitach, whose artwork appeared in issue no. 3 and whose writing appeared in issue no. 1, agrees. “Artists are provided a somewhat out-of-the-ordinary opportunity to create a series or edition without any commercial gallery restraints,” she says, adding that for buyers, “It’s exciting to have a fine art product that comes in subscription form, that comes in a little archival clamshell box that can sit on a shelf.”

Arnold first floated the idea in 2007, as part of her (now defunct) blog, Artomaton. “I was looking for a way for art to drive itself and carry forward,” she says, explaining the name. Artists, however, were skeptical. Galleries were plentiful and the preferred method for increasing name recognition.

But with the new (post-real-estate-crash) economy, Arnold says, “Artists are willing to be more experimental.” So she thought, “Why not try this again?”

Having grown up in one of the few working-class poor families on Queen Anne, Arnold understands the push-pull of wanting to be a part of the art world, knowing you have a certain degree of arts literacy, but feeling like you aren’t invited to participate fully. (She says she was raised with the philosophy that “it’s great to draw, but you need a job to back it up.”)

After dropping out of high school and earning her GED, Arnold pursued a career as a chef, cooking at local restaurants before moving to New York City. She worked at various New York restaurants until realizing, “You can’t be an artist and a chef at the same time.” So she quit and enrolled in art school at the Pratt Institute.

In 2004, Arnold returned to Seattle to complete her degree at Cornish College of the Arts. Now, her day job is in line with her artistic mission: She runs youth programs for Gage Academy, work she calls “critical” because she’s teaching kids that being an artist is a real occupation.

“As artists, we’re always putting up art for free,” Arnold says. “But if we believe art is a valid profession—as valid as doctors and lawyers—we need to insist on getting paid.”

Accordingly, about 70 percent of the LxWxH purchase price goes to the artists. “I want this project to be viable for the people involved,” she says. (The maximum amount an artist receives is $800; writers max out at $250.)

Artist Veltkamp notes, “It’s satisfying to know that everyone gets paid, even if it’s not a ton. I see lots of projects in Seattle where contributing is its own reward, but as someone attempting to make a living off of art, I’d love to see more projects like this.”

So would Arnold, who hopes eventually to expand LxWxH to Portland, Los Angeles and New York City. “It’s a little bit of a soap box,” she says, smiling at the double entendre. “I’m packing up and mailing out a philosophy, too.”

The November issue of LxWxH features artwork by Francesca Lohmann and Lauren Klenow, with an essay by Rachel Shimp. lengthbywidthbyheight.com