The Map of the End of the World 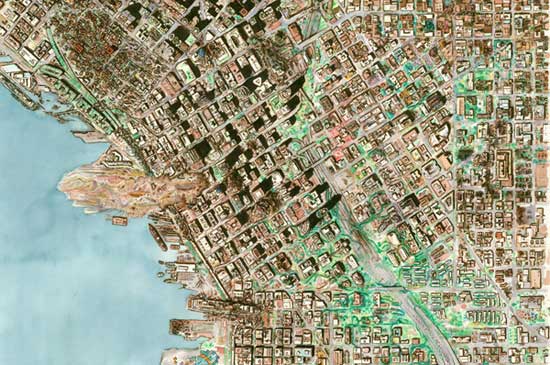 According to the Seattle Doomsday Map, not even the apocalypse will change local priorities. But in this dystopian future, you have to brave the Belltown black market to get a decent espresso, and the only organic garden grows on a heavily guarded SLU rooftop. For his meticulously detailed map (24 by 36 inches) local artist Tony Dowler used pen, ink and watercolor to re-create Seattle’s streets and major landmarks, then let his imagination run wild, pummeling the city with disasters such as earthquakes, zombies, radiation leaks and a cruise-ship crash. He hopes viewers will “create their own stories” about what caused all the mayhem, but for those in search of a storyline, Dowler has written an accompanying satirical travel guide, Dee Dee’s Doomsday Guide to Surviving in Post-Apocalyptic Seattle, which reveals the locations of everything from biohazards to the scroungers’ lair on Denny Street. A tech writer by day, Dowler created the map during a yearlong personal commitment to paint in his free time. To fund printing costs, he posted the finished map on Kickstarter, where backers met the $1,500 goal after just a few hours and pushed the final pledge to more than $18,000. He plans to use the extra revenue to fund the creation of apocalyptic maps set in other cities. Maybe Portland’s Mount Hood isn’t so dormant after all. Maps $15; available at tonydowler.com.