Matt’s In The Market Diners Score On Sonics Thursdays 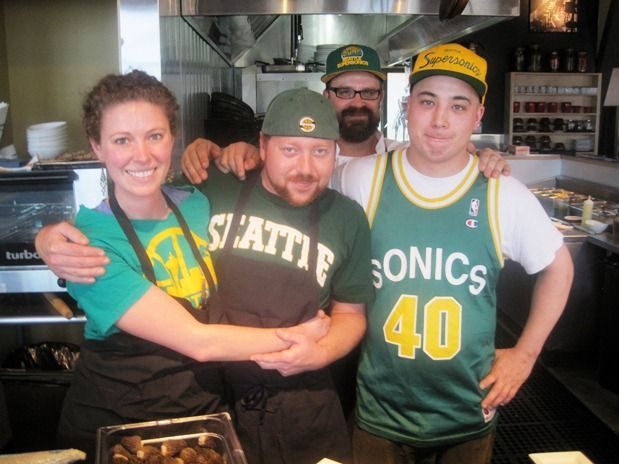 So, some team that used to be known as the Seattle Supersonics is playing a big game tonight somewhere besides Key Arena. Are we bitter? Just a smidge.

Still, there is some sweet relief in sight because Thursdays are Sonics night at Matt’s in the Market. Chef Chet Gerl and his crack crew get their green and gold on and any customer who walks in the door of this super cool Pike Place Market venue wearing team jerseys, hats, a Slick Watts headband, they’re going to get treated right. And by treated right, we mean that Matt’s will spring for dessert. Sweet!

This promotion was truly organic in its inception, starting when basketball-loving Gerl bought his cooks Sonics socks for Christmas. And quicker than Downtown Freddy Brown could sink a three-pointer, Sonics Thursday was launched back in January, after the restaurant reopened with its new, improved kitchen space.

That’s just some of the groovy things going on at Matt’s these days. Too bad if you missed the boat on the Planes, Trains and Traveling Chefs dinner series that featured appearances by some red haute cooks. The sold-out series wraps up Monday in a meat-y way, as Beast’s Naomi Pomeroy from Portland rolls into town for some snout-to-tail magic.