Meat-focused Bars Are the New Black

Serving cured, smoked and sliced meats seems to be a hot trend around Capitol Hill bars. 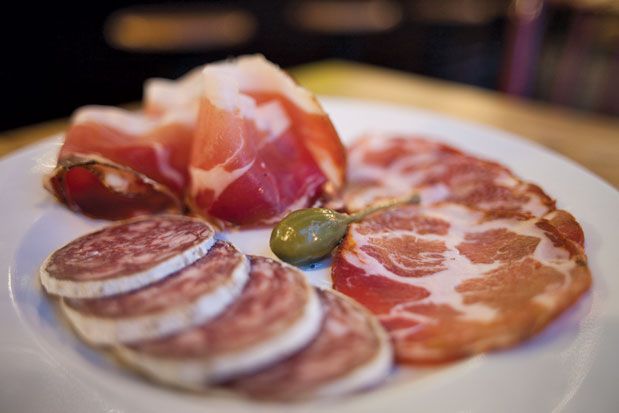 If three of a kind constitutes a trend, then bars that serve cured, smoked and sliced meats are the new black, at least on Capitol Hill. First came Cure, the wee bar in an alley behind Broadway, which opened two years back. There charcuterie and cheeses, olives and pickles, Euro wines, several beers and cocktails lure folks in.

This month, two more meat-focused bars are opening nearby. First to come: The Old Sage (1410 12th Ave.; mccrackentough.com). Named for the wise gent a few seats down the bar who jumps into your conversation, offering a strange bit of trivia, and then goes back to his beer. Owners Brian McCracken and Dana Tough (of Spur, Coterie Room and Tavern Law) will offer house-made charcuterie and smoked meats, with a special emphasis on American ham, and a lineup of whiskeys to pair. Look for The Old Sage to open this month or in early March in the old Local Vine space. Last but not least, busy guy Ethan Stowell is getting in on the action. Next door (and connected by a hallway) to his 15th Avenue seafood eatery, Anchovies & Olives, Stowell [opened Bar Cotto] a charcuterie, cocktail and wine bar (1546 15th Ave.; ethanstowellrestaurants.com) in mid-February.

For late-breaking restaurant and dining news, follow our blog at seattlemag.com/blogs

This article has been edited since its original publication.