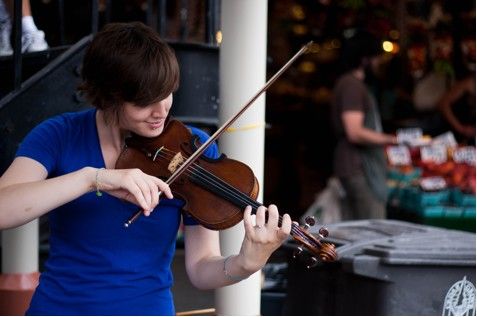 The din emanating from Pike Place Market’s cobblestone corridor is a less than ideal space for weeping violin solos, but that doesn’t stop Annie Burt from enticing market goers through a maze of stalls to her open instrument case; adorned with nothing more than a cardboard sign that reads “COLLEGE”. Burt has busked Seattle’s iconic market for the last 6 years—starting at the age of 16—and is now performing her way through nursing school at UW. With a background in classical performance, she’s had to learn a few tricks about playing on the street.

SM: What kind of music do you play?

AO: My background is mostly in formal training and classical pieces. When I was first studying music at UW, I would come down and practice Bach, Beethoven or Mozart, but no one seemed to care. A few years ago I picked up an old Texas American Fiddle songbook and started adapting pieces from that. It’s gotten a much better response. You have to play something that will catch a person’s ear, and that seems to do it.

SM: What contributes to your success?

AB: Appearance matters. I definitely make an effort to not wear jeans with holes in them, or grungy shoes. I remember when I cut my hair short I started averaging about $20 less per performance. The same thing happened when I got my lip pierced.

SM: Why busking instead of a more traditional job?

AB: There’s no better job in the world. I get to set my own hours and schedule. When I get to the market I usually read my book for an hour or so while I wait for an open spot. Vendor friends give me fresh fruit and the money is good. In two hours I can make the same amount that someone with a regular job might make in five. Ultimately, I love to perform but it fulfills more pressing needs at the same time.

AB: It used to be an incredibly busy area. Often it was hard just to find an open space to play. But, about two years ago we had an oppressive heat wave and that week, everything seemed to change. Suddenly there weren’t nearly as many people performing. Now it’s picking back up, I think in part because of the economy. People are looking for any outlet to make money.