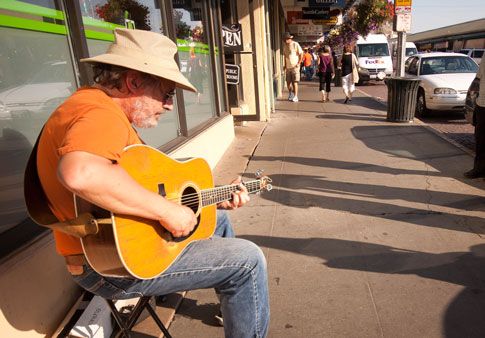 Humble strummer Jim Page’s expansive repertoire of songs reflects a lifetime of political and social activism, not surprising coming from the man who legalized busking in Seattle back in 1974. As one of the founders of the Pike Place Market Busker’s Guild, Jim helped inspire decades of street musicians and performers. You won’t see Jim playing the market very often anymore—he tours and collaborates with other artists mostly now—but if you do, expect to see a happy crowd around him. When we caught up with him, he shared one of his more recent releases, Ghost Bikes.

SM: What is the significance of Ghost Bikes?

JP: Ghost bikes are an international phenomenon. When a bicyclist gets killed, usually because of a car accident, the local bicycle community will take an old bike, strip a lot of the parts off of it and then paint it white, chaining it up at the location of the accident, as a memorial.

SM: Given your history, do you feel like you have a special role in the Seattle busking scene?

JP: No, not any more. I did back then [when the Guild was created] but I don’t anymore now. I play and I record and tour. I did what I did and everybody does what they do and then other people come along and do what they do and sometimes it’s based on the people before them and sometimes it’s not. I helped start things, but things have gotten a life of their own and moved forward on their own.

SM: Are you happy with how the busking scene has grown around the market?

JP: Yeah it’s always kind of interesting. There’s everything down here. There’s real good players that are worthy of any stage in the country and then there are people that really should practice. It’s an open stage. The only requirement is that you get a permit to perform, which is not very expensive. While the rest of the city is open for performers without any kind of permit, they can enforce permits here because it’s a history district. But that’s the only requirement. Other than that, if you only know two songs, you can stand in your spot and play those two songs for an hour.

SM: How is the permit system monitored around the market?

JP: A lot of it polices itself. If you have trouble, you can always call security to enforce the rules and regulations. For example, you can only play where there is a musical note painted on the ground and if anyone is lined up after you, then you can only play for an hour. If no one is lined up, you can play all day. But it keeps turnover going and prevents people from hogging spots.

Listen to a live performance of “Ghost Bikes,” the title track from Jim Page’s 21st album of folk songs, released in 2010. Recording taken on September 7, 2011.