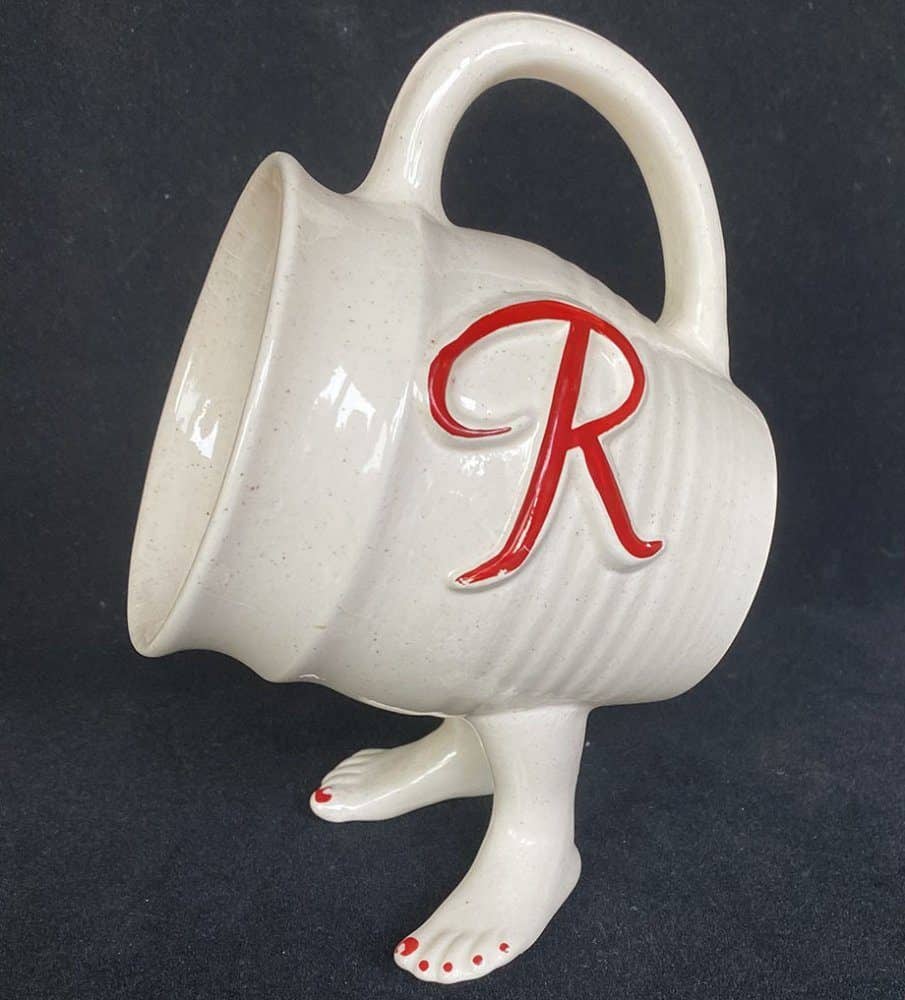 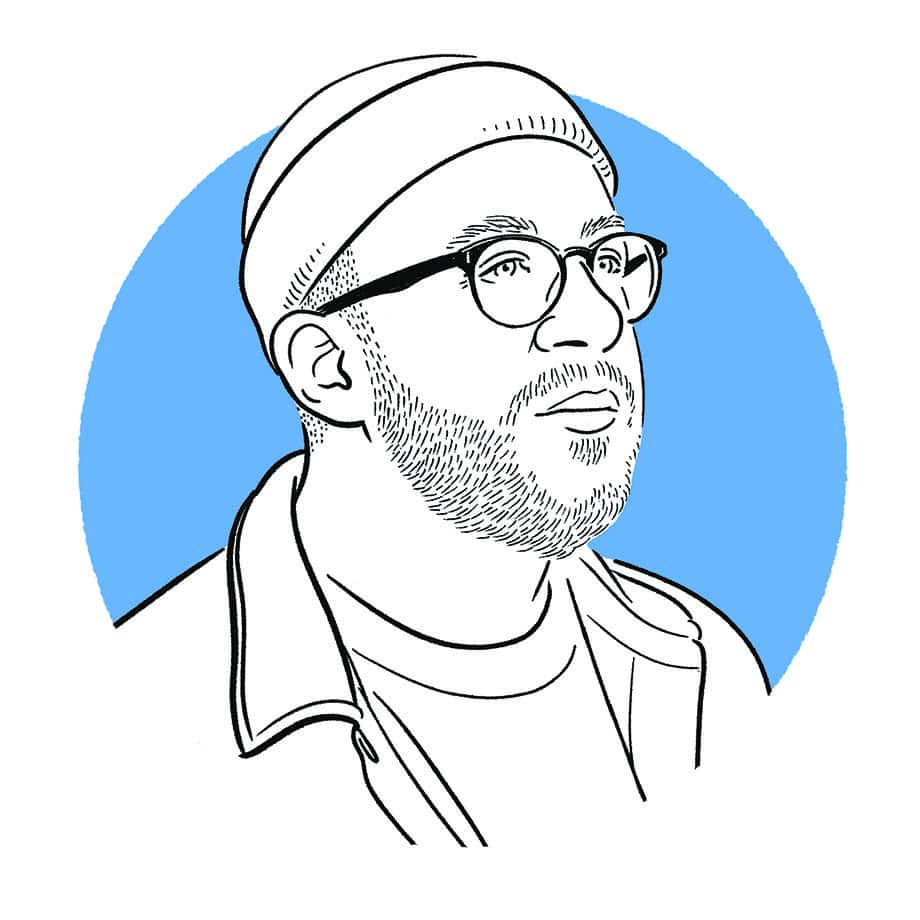 The artifact in this issue not only plays a peripheral role in the history of this very magazine, but also tells the local story of one of the most prolific talents in the world of advertising. It is a relic from a time when Seattle’s oldest brewery was grabbing the region’s attention with its quirky and offbeat television commercials.

It all began on a dark winter’s morning while searching through the dimly lit basement of a Ballard estate sale. Word on the street was that the house, a beautiful, turn-of-the-century Craftsman, had belonged to a former Rainier brewery worker. Armed with this intel, I was determined to find some unique breweriana collectibles, which I eventually uncovered in one of the downstairs rooms.

While digging through a box of random stuff, my attention was suddenly grabbed by a white porcelain beer mug with two legs and the familiar red “R” on its chest. The toenails of each foot were painted in the same Rainier red as the “R.” It was completely ridiculous, brilliant and mysterious all at the same time, and I was eager to learn more about it.

It didn’t take long to discover that this novelty mug was the creation of local graphic artist and advertising guru Terry Heckler. His career is a fascinating one and serves as a résumé for some of the most ambitious advertising in the Pacific Northwest. He not only came up with the name of Seattle’s most successful coffee business, but also designed its famous logo, and several very recognizable corporate names are the result of his branding genius.

In 1966, Heckler first arrived in Seattle after accepting a position at Boeing as a perception research analyst in the computer graphics department. Two years later, he served as the art director for a new publication known as “Seattle” magazine, where he became friends with fellow contributor Gordon Bowker.

Based on their shared creative interests, they decided to form an advertising agency, naming it Heckler Bowker. The company would prove to be fairly short-lived, though their subsequent partnership on other projects would have an enormous impact on both local and national culture.

Their first collaboration took place in the early 1970s, when Bowker cofounded a new coffee shop near Pike Place Market. He turned to his creative partner for help with a name — something catchy — and after much brainstorming, the result was, of course, Starbucks. Heckler was also responsible for designing the coffee chain’s famous mermaid logo, which, he explained in a later interview was “a metaphor for the allure of caffeine, the sirens who drew sailors onto the rocks.”

As Bowker’s new coffee venture took off in popularity, Heckler continued on in the advertising world. His business was now known as Heckler Associates, and one of its earliest clients was the Rainier Brewing Co. Sales for the iconic brewery had been steadily declining and something new and exciting was needed to give the struggling business a shot in the arm. Heckler’s advertising firm gave Rainier executives exactly what they wanted with a series of odd and surreal commercials that immediately grabbed the attention of local television audiences across the region.

These included the Running of the Beers (a parody of Spain’s famous running of the bulls) that featured a galloping herd of Rainier beer bottles with legs. Another memorable spot was a marsh full of frogs whose collective croaks sounded out the words “Rainier” and “beer.” The one that became a true Northwest classic, though, was a TV commercial showing a motorcyclist headed toward Mount Rainier. As the speeding bike changes gears, the revving engine roars out a very recognizable “Raaaii-nnneer Beeeeeeeer.”

Thanks to Heckler’s work, Rainier reclaimed its throne as the top-selling beer in the entire state. In addition to the TV spots, the brewery also produced a line of Heckler-designed posters and other memorabilia, including the quirky beer mug that I recently found at the estate sale.
By the early 1980s, Gordon Bowker was no longer involved with Starbucks, and had now set his sights on “making Seattle a better beer.” Just as he had previously helped to revolutionize the coffee industry, Bowker was now intent on achieving the same thing within the new and emerging world of craft beer.

Once again, he turned to Heckler for some creative help with the branding of this new venture, resulting in the name Redhook. Just as he had with Starbucks, Heckler also designed Redhook’s logo, helping to successfully launch Seattle’s first craft brewery in 1981.

In the years since, Heckler’s advertising agency has focused its efforts on branding consultation and has been responsible for coining the names of several well-known companies, including Panera, Cinnabon, Qdoba and Coinstar. More recently, the agency helped brand the name for the popular Suncadia Resort in Cle Elum.

As a result of this prolific body of work, Heckler has won numerous awards and his shadow still looms large in the advertising world. He has since retired and his ad agency, now called Heckler Branding, is run by his son, Tye Heckler. While Terry is no longer involved in the daily operations of the business, his enduring legacy represents an earlier era when Seattle’s own “Mad Men” helped to turn the local advertising industry upside down with their unorthodox ideas.

brad holden is an amateur historian and is the author of two books: “Seattle Prohibition: Bootleggers, Rumrunners and Graft in the Queen City,” and “Alfred M. Hubbard: Inventor, Bootlegger and Psychedelic Pioneer.” Check out his Instagram page @seattle_artifacts, for more interesting tidbits about Seattle’s history.

Why donor-advised funds appeal to investors and nonprofits

In these heady days of affluence in metropolitan Seattle (thank you, technology companies!), people inclined to give back are looking for tax-efficient ways to support their favorite charities. Many have used donor-advised funds (DAFs) to have their cake and eat it, too.  A gift of appreciated stock to a DAF, which can be made through…

Seattle Philanthropists Have a Message: Just Give

Often, folks tell me a simple confession: “I want to start giving back but I don’t know how.” While I am no expert on the topic and consider myself recently influenced by several inspiring folks in the region, I can appreciate the lack of candid and direct info on how it all works. My immigrant…