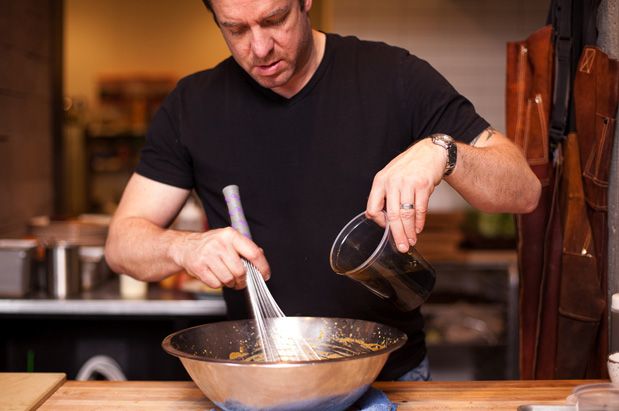 !–paging_filter–pChef Jason Wilson grew up in a family of butchers, and as a kid in Minnesota, he relished the fatty, gnarly bit on the end of a roast. As a chef, he developed modern techniques and tastes, which are on display at Crush in Madison Valley, but with his newly openeda href=”http://seattlemag.com/millers-guild-bags-room-service-hotel-max” Miller’s Guild downtown/a, he returns to a more visceral style. brbr“It’s wood-fired cooking in a nutshell,” Wilson says of the 9-foot-long, custom-made, open-flame grill that serves as the restaurant’s centerpiece. Instead of traditional grates, the grill is tilted at an angle to funnel “the goodies”—seasoned fat, grease and oils—into a channel. Early on, Wilson dipped some focaccia in it, and proclaimed, “This is good!” brbrThis eureka moment went on to inform the menu. Using the collected grease as an infused oil, Wilson created a house-made mayo, naming it Motoraioli in homage to the brown hue the drippings impart. In home kitchens, leftover roasting juices are more commonly used in gravy, or, gasp, treated as waste. Wilson showcases it in his signature aioli. For brunch, Motoraioli is served alongside fries as a dipping sauce, while for dinner, it appears in an appetizer of corned beef tongue, house pickles and leeks. brbrstrongspan style=”color: #ff6600;”How to make motoraioli:/span/strong You’ll need about 1 cup of fat drippings for a good portion of mayonnaise, which is made by emulsifying the oil with egg yolks, as you would with a traditional homemade mayo recipe.brbrstrongspan style=”color: #ff6600;”Save the drippings:/span/strong “If you’re searing a steak in a pan, or making a standing rib roast or pot roast, collect the fat that’s left over,” instructs Wilson. Depending on the meat cooked and the seasoning used, flavors will vary. Save the fats from several recipes by storing them in a covered container in the fridge, where it will keep for several months. Saved drippings can be used as a basting “butter” for roasts, grilled meats or vegetables—grilled radicchio is a favorite.brbrstrongspan style=”color: #ff6600;”Where you can find motoraioli:/span/strong On the menu at Miller’s Guild or in your own kitchen.brbrstrongspan style=”color: #ff6600;”Why you should try it:/span/strong Using every last bit of an ingredient means you are maximizing both flavor and your budget. Why spend $3 on a jar of mayo when you can make it at home using an ingredient you would have thrown away?brbrWant step-by-step instructions on how to make it? a href=”http://www.seattlemag.com/article/how-make-chef-jason-wilsons-house-made…” target=”_blank”We’ve got ’em here/a./p