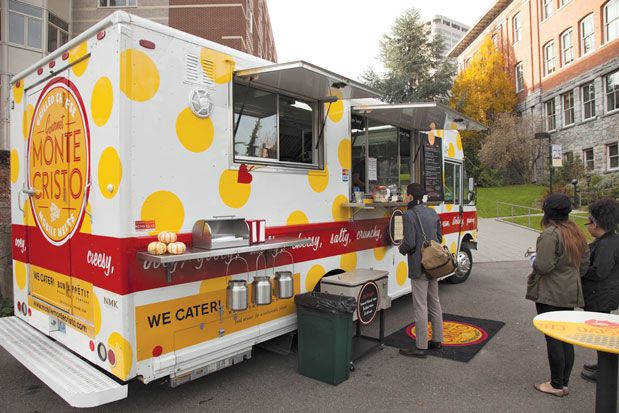 Danielle Custer’s got food chops: She was chef at several area hotel restaurants before heading the culinary team at Taste at the Seattle Art Museum. Custer has now joined the mobile food movement with the yellow and white polka-dotted Monte Cristo, a gourmet grilled-cheese truck in which cinnamon toast is batter-dipped, griddled and layered with two cheeses (cheddar and Gruyère) and Canadian bacon, then dusted with powdered sugar and splashed with lime for the Full Monte signature sandwich ($8). If that seems a wee bit over the top, you’re getting the idea.

For the No. 4, four Samish Bay cheeses are piled onto a torta roll with a spread of peach-jalapeño chutney ($8.99) for a tasty Caribbean take. The classic grilled cheese, with cheddar, Jack and Gruyère ($6.99), is a nice choice, even if I’m on the fence about the blueberry dipping sauce.

Just one major stumble to avoid—“Shrooms on a Shingle” ($8.25): The shingle (rosemary flat bread) was soggy under the weight of cheese and mushrooms, and the sandwich became glued to the paper plate.

Chilly after waiting in the blustery weather? Opt for a $1 creamy tomato soup shot. It’ll warm you right up.

Catching Up With Monte Cristo At Queen Anne Farmers Market

!–paging_filter–pspanIt’s been rolling around town for nearly a year, but I just finally caught up with the amazing a href=”http://www.mobilemontecristo.com/“Monte Cristo/a truck, a tasty venture run by seasoned chef Danielle Custer./span/ppThough I had dinner plans later, I couldn’t resist trying this mobile kitchen’s rightly famous fried cheese curds, dipping the melty bites into a tiny…

Toddlers and hipsters are equally at home at this upbeat, affordable diner

Where Ya At Matt