William H. Gates Sr. is the Yes on 1098 Campaign Spokesman and co-chair for The Bill and Melinda Gat 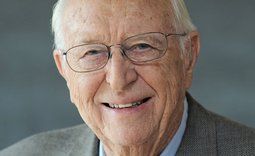 As if working to eradicate polio weren’t enough, Bill Gates Sr. has, in his mid-80s, ventured forth and not only approached, but actively embraced, the so-called third rail of Washington state politics: the income tax. This is in addition to his co-chairmanship of the Bill & Melinda Gates Foundation and his active involvement in numerous aspects of civic life.

By lending his name and visage to the Yes on 1098 campaign, Gates did two remarkable things this year. One, he gave the effort to reform Washington’s famously regressive tax code the boost that only a celebrity can provide, thus helping Initiative 1098 in fundraising and in garnering enough support to ensure its place on the November ballot. Two, Gates comes from the class that would be most directly affected by a measure like I-1098, which sought to put an income tax in place for individuals who earn more that $200,000 per year.

Gates modestly saw his role as being the campaign’s spokesman, and not necessarily the great persuader. He says he has friends who were both adamantly against and enthusiastically in favor of I-1098—people who had thought through their positions. “I don’t think of myself as being an example that’s going to make a lot of people…change their mind,” he says.

Still, Gates was moved to act. His involvement with I-1098 can be traced back to his chairmanship of a committee the state Legislature formed in the 1990s to study tax reform. He came out of that process convinced of the need for reform, and his public role in this year’s campaign was an outgrowth of that process. He doesn’t think he’s likely to engage in other campaigns in the future, but no matter the Election Day outcome, it is largely because of Bill Gates Sr. that Washington was even considering a form of income tax.