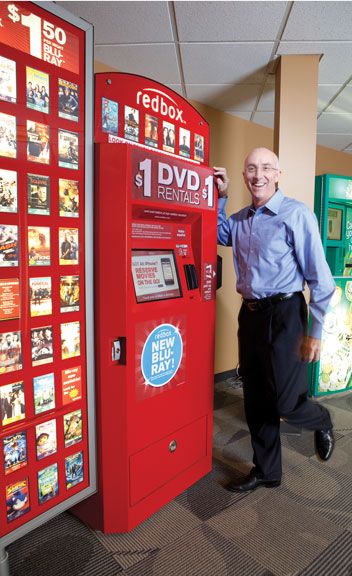 That’s double the revenue flow of several years ago, when Coinstar was casting about for a growth strategy as its coin-counting business slowed. Coinstar invested heavily in rolling out the now-familiar red kiosks, placing them in stores consumers visit regularly, such as Fred Meyer, Walmart, Walgreens and 7-Eleven. Now with more than 24,000 locations nationwide, Redbox has helped Coinstar jump from obscurity to prominence at the speed of Hollywood’s bright light. The journey hasn’t been entirely easy. Coinstar CEO Paul Davis spent much of 2009 fighting legal battles with movie studios that feared Redbox’s $1 rentals were eroding DVD sales. Redbox settled those disputes by generally agreeing to wait four weeks from the release of a DVD before putting it into its boxes. (Deals in place with other studios continue to provide titles as soon as the DVDS are released.)

In September, Fortune magazine recognized Coinstar as one of the nation’s 100 fastest-growing companies, citing Redbox’s growth and its interest in online streaming to compete with Netflix. Acknowleding the honor, Davis says, “Coinstar is committed to innovation in the automated retail space, and we’re excited to see our growth recognized.”