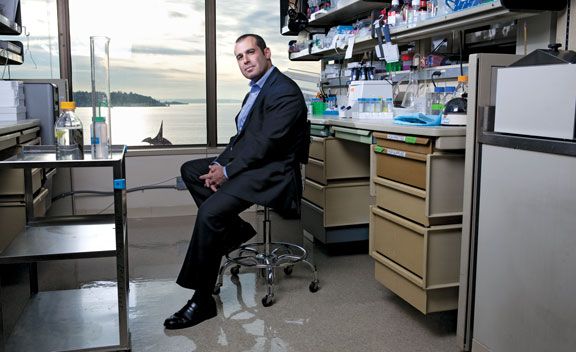 Mitchell Gold and the company he heads, Seattle-based Dendreon Corp., rocketed into national headlines this year when the U.S. Food and Drug Administration approved Dendreon’s Provenge as a treatment for late-stage prostate cancer. The value of the company’s stock multiplied more than 10 times as analysts estimated the drug could generate about $1 billion in sales per year.

For men diagnosed with prostate cancer, these figures matter less than the hope that they will enjoy longer lives. Provenge has been called a “game changer,” a therapy that takes cells from the patient and treats them in a lab before returning them to fight the cancer. In one clinical trial, 32 percent of patients were still alive three years after treatment with Provenge.

While Provenge still faces skeptics and obstacles—creating the treatment is far more complicated than manufacturing a pill—Gold, 43, will be forever linked to the brilliance of its debut after 15 years of research. Gold joined Dendreon in 2001 and became CEO in 2003. This year, he was named one the 50 smartest people in technology by Fortune magazine, which described him as a person with “intellect, ambition and the ability to see around corners.”