Music in Seattle Restaurants is Groovier Than Ever

The food in Seattle’s best restaurants is eclectic, personal and surprising—and now so is the music 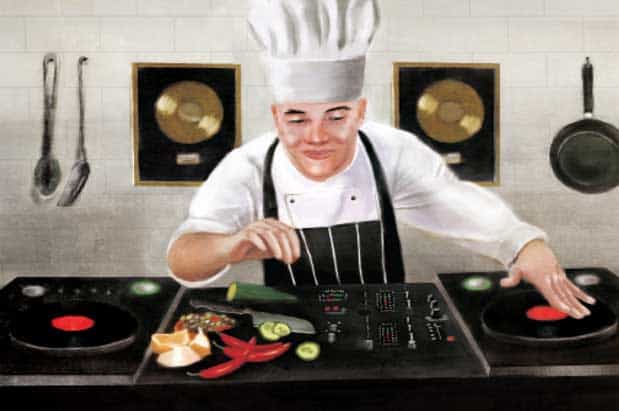 During my early 20s, I worked in the kitchens of several Seattle restaurants. It was sweaty work, tiring but satisfying. The kitchen staff wasn’t tipped where I worked; a cook’s perks were free food, a shift drink or two, and, because we worked in closed-off kitchens, listening to whatever music the chef chose. When it regularly fell to me to peel-slice-chop, peel-slice-chop 200 pounds of melon first thing in the morning, the music we played—the Brand New Heavies’ CD, played on a dusty, oily boom box, was a particular favorite—kept me sane.

This year, however, I’ve found myself grooving to James Brown and Nina Simone, and singing along to Men at Work and Beck—not while cooking behind a swinging kitchen door, but while sitting in local restaurants’ dining rooms. Soothing, inconspicuous sound- tracks in restaurants? They’re largely a thing of the past.

“Music has become more personal, for sure, just as food or restaurants have,” says Tom Douglas Restaurants managing partner and executive chef Eric Tanaka. “Back in the day, it was just, throw the Gypsy Kings in the CD changers and roll with it.”

These days, the soundtracks in Seattle restaurants are less predictable and far more interesting than ever before. It turns out, this is largely because many restaurants are playing what the chefs (now working in open kitchens in many instances) and waitstaff want to hear. In essence, the play-what-you-want perk of the back of the house is now shared with the front of the house, and diners, for better or for worse, are along for the ride.

“Each restaurant plays its own stuff and makes its own decisions as to what to play when,” says Jeremy Price, Renee Erickson’s business partner in The Whale Wins, Barnacle, The Walrus and the Carpenter, and two upcoming restaurants on Capitol Hill, who adds that staff members make their own personal playlists on Spotify. “We do our best to match the energy and tempo of the music to the energy and tempo of the dining room. Consequently, what you hear at Walrus at 7:30 p.m. on a Saturday will be different than what you hear there on a Tuesday at 4:30 p.m.” On heavy rotation: The Velvet Underground, Prince, R. Kelly, David Bowie and Joy Division. “We want mixes that are fun and that guests and employees alike can tap their toes to.”

At Linda Derschang’s collection of restaurants and bars (Linda’s, King’s Hardware, Smith, Oddfellows, et al.), music has always been central to the experience. “When I opened Linda’s Tavern with Jonathan Poneman and Bruce Pavitt, the founders of Sub Pop, we were all in agreement that music was going to be a focal point for Linda’s, because we were all so involved in the Seattle music community,” Derschang says of her iconic Pine Street bar, opened in 1994. “As I opened more and more places, each with their own distinct vibe, I knew that having the right music and lighting was just as important as the design, the menu and the staff.”

The prevalent crossover of people who work in the bar and restaurant industry and in the music industry—day job/nighttime vocation—is apparent on Derschang’s staff; the Derschang Group’s creative director, Jonah Bergman, is a musician. He leads a team on marketing, branding and events, and Bergman is responsible for much of the music programming at the company’s six bars and restaurants. “Each of his playlists usually has a set theme,” Derschang says, “but [the music] still spans genres and decades, and is a mixture of songs you’ve sung along to in your car and songs you’ve almost definitely never heard. He usually finds a way to sneak some Ramones, T. Rex and David Bowie into most of them.”

Along with this significant shift in the types of music being played in our city’s restaurants, diners may also have noticed that the volume has been turned up. Sometimes way up.

At Fremont’s new Manolin, where a menu heavy on ceviche and rum drinks sets a beachy tone, co-owner Rachel Johnson considers music a key element in creating the ambiance. “Here’s what I don’t like to play or hear at Manolin: music that is moody in a sad way. Music that feels ‘negative.’ Plus, I’m seriously considering creating a ‘Songs I just never, ever want to hear again in my whole life’ list,” Johnson says, which would include “At Last” by Etta James and “Heard It Through the Grapevine” by Marvin Gaye. At Manolin, you can expect to hear “funk, soul, Latin, Caribbean and yacht rock. Stuff that goes really well with ceviche and sparkling wine.” And you can expect to hear it at levels you can sing along to. I caught myself dancing in my seat to Kings of Leon during my first dinner there.

But as the volume goes up, the line between hearing the music and not being able to hear the person you’re dining with can stretch awfully thin.

In the right circumstances, music is a great way to differentiate your restaurant’s vibe. But when it interferes with dinner conversation or becomes some kind of inside joke for the staff, it’s alienating for the diner. And it’s another example of the slow, steady deterioration of service—along with no substitutions, dishes arriving in whatever order they’re ready—in local restaurants. When the desires of the staff outweigh the comfort of the diner, who really wins?

Creating a happening vibe, however, is a crucial, if intangible, element of success. Take Rachel Yang and Seif Chirchi’s Korean-fusion restaurants—Joule, Revel and Trove—which are among the city’s best. They’re unapologetically fun. But they, too, can be loud. Especially Revel. I love the food there—the Korean pancakes and the outstanding noodle and rice bowls. But twice while lunching there, I’ve all but given up on lunchtime conversation. That is, to an extent, by design.

“Revel has become synonymous with a rowdy fun house, which has a lot to do with [the] hardcore old-school hip-hop it plays all the time,” Yang says. “It really came from the fact that Revel has an open kitchen, and the diners are invited to the party that the cooks are hosting every night. And cooks, Seif [Chirchi, Yang’s husband and partner] being the dictating voice in this case, really rock it with good beats.” Yang and Chirchi use Pandora (which creates playlists based on an artist or genre) at their restaurants, playing, say, the Ray Charles channel for the brunch crowd at Joule, and the Michael Jackson channel during lunch at Trove Noodle. And a young, flush generation of diners—who expect restaurants to double as entertainment—is eating it up.

At the 18 Tom Douglas restaurants, they dial back the volume (a bit). “We try to have our music be more of a backdrop versus “Hey, check out our hip playlist loud!” says Tanaka. And that requires a tight balancing act in each of the restaurants. “This means somebody needs to pay attention and adjust volumes and make sure the volume suppression is on.” But, of course, that means a different thing for each of the restaurants: upbeat rock played (pretty loudly) at Douglas’ casual new tacos and margaritas spot, Cantina Lena, during one recent dinner. But the music fit the space and the crowd: groups of after-work singles ordering margaritas and tacos. During a Friday-night dinner at Palace Kitchen in March, the music was sometimes noticeable, sometimes not; in other words, just about perfect.

Crowd-focused customization is the approach at Ballard’s Brunswick & Hunt. “We try to mirror the mood and be age appropriate for our guests,” says owner Barry Rogel, who says the restaurant plays personal playlists. So, when the place is filled with an older crowd, “We throw in some classics (Sinatra, Tony Bennett, Johnny Cash, etc.), some pop, and some old ’60s Grateful Dead. More middle-aged, we go to the ’80s and ’90s. Depeche Mode is a favorite,” says Rogel. “Rule of thumb? Keep it fun and don’t play music that tries to make a statement. Hopefully, the music, the food, the drinks and the ambiance create an energy that makes our guests feel part of the place.”

The music at Le Pichet is less intrusive, yet still a part of the overall experience; during one dinner in February, I only heard the music through the busy-restaurant din when it got late and the crowd began to disperse. “As with the decor at Le Pichet, we wanted the music to give the feeling of a neighborhood Parisian restaurant. However, we wanted to avoid creating a 1930s movie-set version of Paris, where the music is always ‘La vie en rose,’” says Jim Drohman, who owns Le Pichet and Café Presse with Joanne Heron. “The sound of contemporary Paris is a mix that includes rap and hip-hop, pop, North African and many other influences, much of it in French, but also much from the U.S.”

On the other hand, owner and chef Brandon Pettit, of Ballard’s Delancey restaurant and Essex bar, embraces the cinematic inspiration. “I like music that is transporting and makes you feel like you’re in a movie,” he says. “We do a lot of old Django Reinhardt and Elmore James, R.L. Burnside and Nina Simone, James Brown and the Jackson 5, and R&R and Talking Heads.”

Zach Harjo, owner of Ballard’s Ocho—and co-owner of the newly opened Hotel Albatross, a tiki bar with fried tacos—offers an enchanting angle on the art of marrying music, food and ambiance in his bar and restaurant. “It’s all part of what I consider to be the immersive theater or art-installation aspect of creating public spaces,” says Harjo, who—you guessed it—is also a musician. In fact, at Hotel Albatross, Harjo has two turntables—an accessory growing in popularity in restaurants—spinning an eclectic mix of jazz, tiki lounge music and more.

Harjo, too, considers the transporting effects that music can have on atmosphere. “I choose to look at these spaces as an opportunity to enter a set in a really good movie that…suspends your disbelief.” And, as in movies, it’s often the music that we associate most strongly with our memories. Adds Harjo, “Pulp Fiction would not be the same without that Dick Dale guitar intro.”