Combining their musical talents and passion for the outdoors, Anastasia Allison and Rose Freeman play trailside concerts for hikers and trees alike 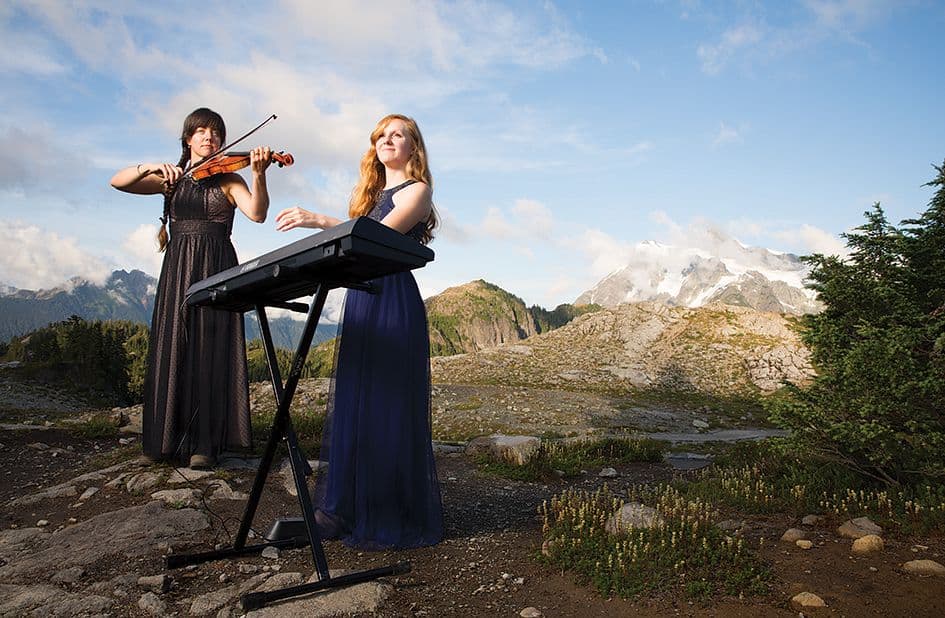 A morning with the Musical Mountaineers—violinist Anastasia Allison and pianist Rose Freeman—begins early, and with cat GIFs. Early, because they want to beat the sunrise. Cat GIFs, because, well, that’s how Allison, 38, and Freeman, 28, communicate when they start the day at 12:45 a.m.

The two musicians rise well before the sun, drive to a trailhead in the mountains (usually in the Cascades), load a violin and a keyboard into their respective backpacks and begin to hike. Once the duo reaches their destination, they change into gowns and perform for an audience of mountains and trees, plus any hikers who happen to stumble upon their concert.

Then, they pack up and head home, Allison to Everett, and Freeman to Bothell, arriving when most are just starting to wake.

Freeman calls these Musical Mountaineers performances “lifegiving,” and both she and Allison say the concerts help them stay in the moment, on and off the trail. “Nature has a way of forcing you into presence,” Allison says. “When we do these little adventures, you take that reminder home with you, and it makes you a better person in the other parts of your day, too.”

Allison says that she and Freeman were “destined to converge” and create the Musical Mountaineers. They first met digitally in August 2016, when Freeman was the only person to enter a contest to win a book, Andrew Skurka’s The Ultimate Hiker’s Gear Guide, that Allison was giving away.

A little less than a year later, in June 2017, the pair met for coffee at the Spotted Cow in Mill Creek and realized they both dreamed of combining their musicality with the outdoors. They had some similarities growing up, both beginning to play music at a young age and continuing to play through adolescence and into college. Both were homeschooled and influenced by a grandparent who encouraged them to pursue music. At Whitworth University in Spokane, Freeman majored in piano pedagogy. After graduating, she became a nationally certified teacher of music and now teaches students from her home. Allison attended Franklin & Marshall College in Lancaster, Pennsylvania, where she became concertmaster of the school symphony.

The pair also shared an appreciation for the outdoors. Allison left a semiprofessional symphony she joined after college when she moved to Washington to become a park ranger. Though she no longer works in that capacity, she is now a wilderness first responder and backpacking instructor. Freeman is a graduate of the Everett Mountaineers’ basic climbing course and is certified in wilderness first aid.

Allison and Freeman played together for the first time in September 2017, at a small pond in the North Cascades. Since then, they’ve performed dozens of concerts in the mountains, as well as a few public performances; coverage from the likes of  Outside magazine and the BBC has followed.

Keeping with “leave no trace” principles, they don’t announce their concerts beforehand to ensure an area isn’t inundated with hikers. “And to protect the simplicity of what we are,” Freeman says. “Because it would be a lot different if people were clapping.” 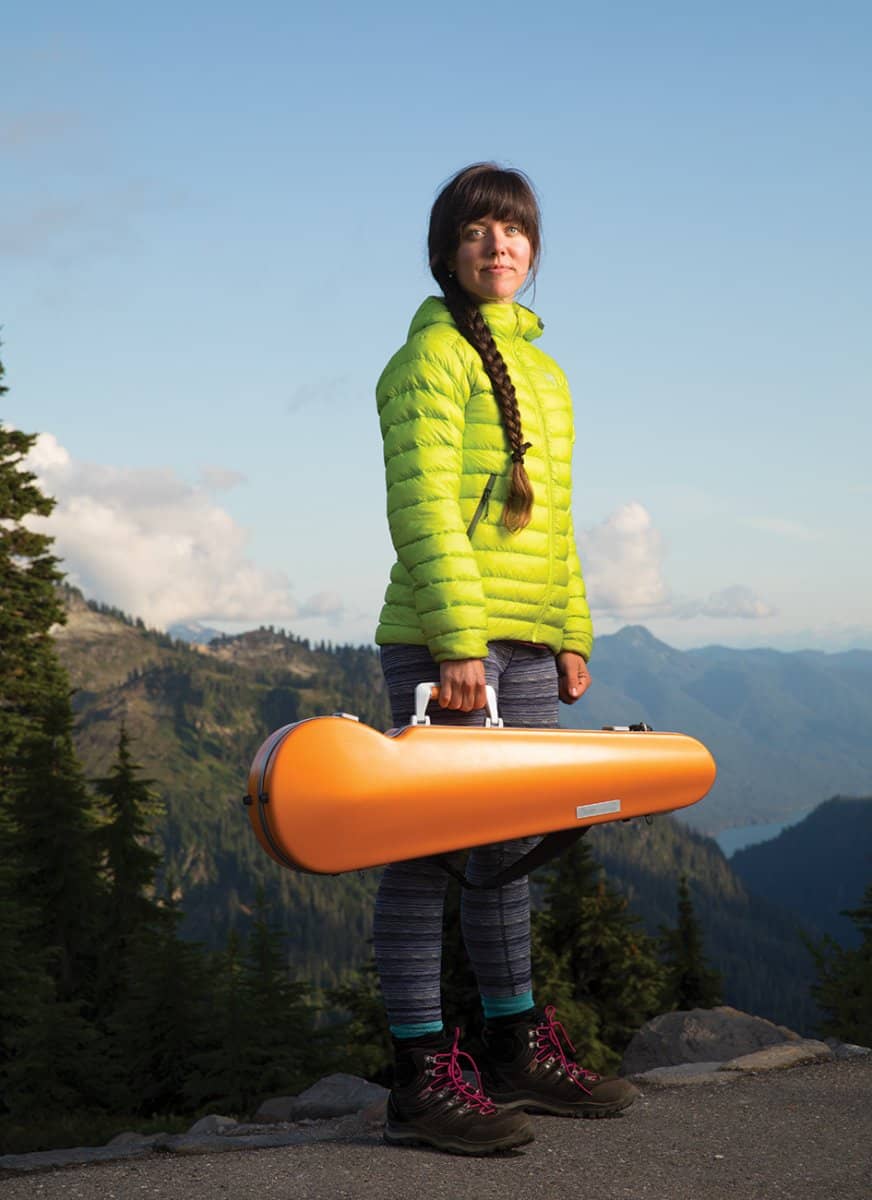 Anastasia Allison is a wilderness first responder and backpacking instructor

To date, only a handful of people (fewer than 10, the pair estimates) have stumbled upon a Musical Mountaineers sunrise concert. Most are shocked and/or amused, and at least one man has cried while watching a performance.

In May, the pair hiked to Lake Serene in the Central Cascades. During the 4-mile hike in, with nothing but headlamps to illuminate the path, conversation revolved around Freeman’s career as a piano teacher, Allison’s work as a life coach, and Kula Cloth, the antimicrobial pee cloth Allison created as a “leave no trace” alternative to toilet paper.

“She’s a constant friend to me, whether we’re Musical Mountaineering or not,” Freeman says. “We talk about more than just music, every aspect of life you can share with a person.”

Performing as the Musical Mountaineers allows Freeman and Allison to support the outdoors in a personal and meaningful way. “We want our music to benefit what’s most valuable to us and for our music to actually give back to national parks,” Freeman says. To that end, the pair will play a concert at Benaroya Hall in October to support Washington’s National Park Fund.

Allison says the Musical Mountaineers helped her reestablish the connection with the outdoors she says she lost after being laid off from her job as a park ranger in 2012. “I had wanted to be a ranger since I was 11 years old,” she says. Being laid off “was really devastating for me, and now it feels as though I’ve gotten back there, just in a different way.” 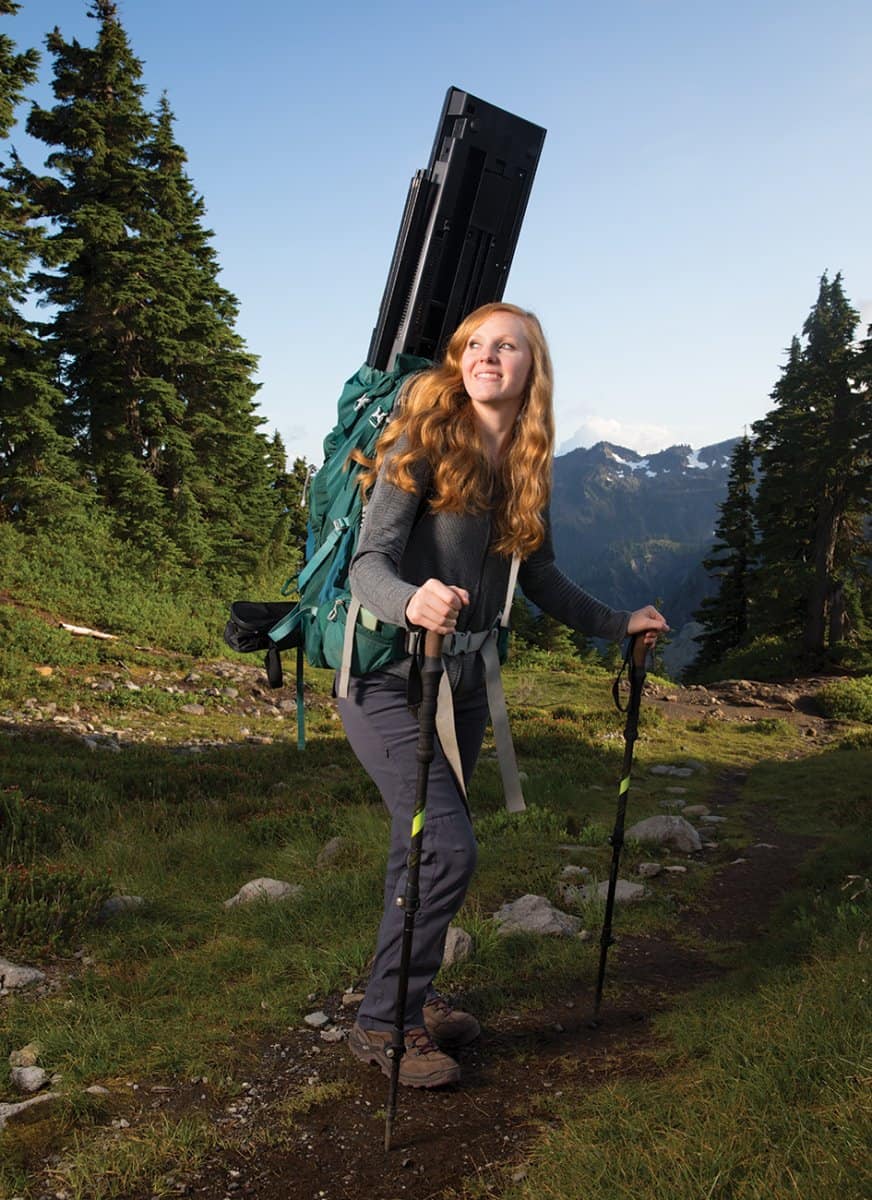 Rose Freeman teaches piano when not playing in the mountains

After arriving at Lake Serene, changing into their gowns and setting up a camera (they often stream the performances live and/or record them), Allison and Freeman launch into Jay Ungar’s “Ashokan Farewell.” The performance also features the hymns “Be Thou My Vision” and “This Is My Father’s World,” along with some improvisation.