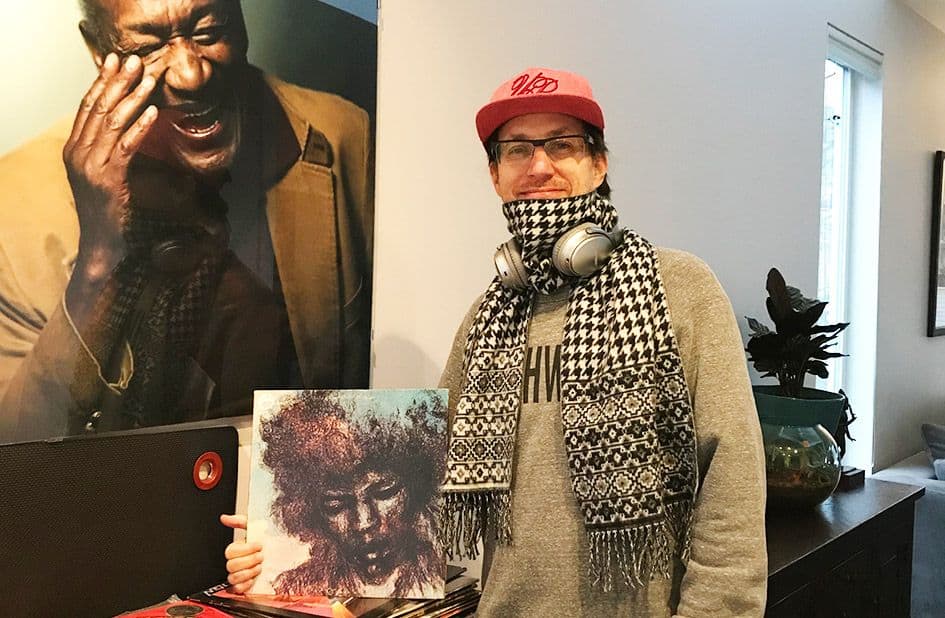 This is part of a series of personal essays and interviews we’re calling Stories from Seattle, contributed by our community and designed to show how the coronavirus pandemic is impacting the lives of Seattleites. Want to share your story, coping mechanisms, wildest ideas? We’d love to hear. Please email: [email protected].

As told to Tricia Romano.

I’m the co-owner of Neumos, Barboza, the Runaway. And then Life on Mars is the bar we opened—me, John Richards, myself and our wives—nine months ago. It’s in the old War Room space. It’s all plant-based food, with 6000 records on a wall that we let people play.

As soon as they put in place the 250-person limit [on gatherings], Neumos closed, along with Barboza. The Runaway stayed open for another week and Life on Mars stayed open for another week. It didn’t make sense to try and keep Neumos open to only have 250 people in it while also having social distancing. It wasn’t going to work. You often need 650 people there to break even and you can only sell 250 tickets. So it just made more sense that we just ended everything. It feels like three years ago, I don’t know, I’m terrible with dates. And I just learned a little bit ago that today is Thursday. It was a revelation to me.

I own two music venues and I own two bars, they are very, very different setups. If Jay Inslee says, June 1, you go back to business as usual, then we’ll be open at Life on Mars and you can come in and have drinks and plant-based food. Neumos will probably be closed because we won’t have any shows because they’ve all gotten canceled or postponed because we work six to nine months down the road, if not longer. And all of the tours are just pushing further and further back. There’s a lot of agents and bands, who are just saying, “We’re not going to tour in 2020 because we don’t know.” And it’s too much work to put together 30 or 45 dates in a row, only to have them cancel and fall apart.

We just came out of the slowest time of the year. Mid-December, all tours stop. People go to Christmas parties, shows basically stop. And you have sober January, where people all decided that they drink too much and so they’re not going to drink at all in January and then start bingeing again in February. There are still no tours happening really until around mid-February, March and then it starts picking back up. So if we don’t have huge reserves, and it’s really expensive for us to stay closed, we still have to pay rents, we still have to pay taxes. We still have to pay massive insurance bills because we have to pay insurance based on what our perceived ticket sales are, what our perceived food and drink is, and then for the building itself. Music venues are often bigger than other small businesses and cost more to run.

We’re in a business that people don’t give up very easily. People want to go to their shows, they want to have drinks. And in 2008 when everything crashed, a lot of people got hit way harder. Our industry didn’t because people still wanted to go to shows and they still wanted to drink. So what we saw is people drinking well drinks instead of Grey Goose, or drinking PBR instead of Mac & Jack’s. They didn’t really stop going to shows except at the very end in August and September, we had the worst months since we had opened. And then the next month, things started bouncing back and we had the biggest month we’d ever had. People won’t stay away from our types of business.

This? This is baffling. I mean, this is the thing that we have zero control over, it’s happening around the entire world. I mean, Tom Douglas is like, ‘There’s no way I’m gonna be able to open half my restaurants.’ He’s like, ‘I’m broke.’ He’s Tom-fucking-Douglas. Like, holy shit. Like if he can’t make it? It’s just—it’s crazy.

We’re now talking to our senators all the time and our reps and explaining. I sit on Zoom, and I didn’t know what Zoom was two weeks ago. I had no idea. I thought Zoom Zoom was the Mazda commercial. And now I’m on it every single day.

We formed the Washington Nightlife & Music Association: a collective of 100 people who are venue owners, GMs, managers, publicists and just people the music industry so people are stakeholders. Dana Sims of El Corazon is part of it. Kevin Sur, who is Artists Home, who does Doe Bay and the Timber Fests. Lee Bezekoff from the Tractor is a big part of it. And we’re on Slack every day, talking to each other, working on different ideas.

And we came up with the five-point plan of the things that we need from our government if we’re going to be able to have venues to come back to. And so my day is spent talking with all of the members of this group and calling our local rep on City Council, King County Council and then coordinating with venues around the country who are doing similar things like the 930 Club in DC, First Avenue in Minneapolis, all the folks in Chicago, the Metro. All these cities have formed their own little factions, and have been doing what we do, which is we send stuff out to our email lists and our social media and say, call these senators and these reps. So they understand this is what their constituents want. And if they don’t do this, and if they don’t come up with lots of cash for venues, we won’t reopen. We can’t handle loans.

We are applying for assistance and loans. There’s the PPP, and the EIDL, which is a straight 10,000 bucks. And that’s going to help a lot of small businesses. But it doesn’t even cover close to a month’s rent for some of us. I mean, I’m glad to take it. The amount of money that we’re going to need has a lot of zeros behind that. We asked for rent forgiveness, but also, it has to be mortgage forgiveness as well. Both of my landlords are awesome. One of my landlords Jerry Everard, he started the Crocodile. He started Moe’s Rockin’ Cafe. He is a huge music fan, and he’s working with us and he’s deferred rent, but he has to make that payment on that building himself. So there can’t really be rent forgiveness if there’s not also mortgage forgiveness.

Where is Jeff Bezos? How many billions of dollars he could just lose and not know any difference? If Paul Allen were alive, I know he would be doing something. I know he would. He did a lot of great things for the arts while he was around with his money, and I’m hoping that the people that are running Vulcan are working on something behind the scenes to help the arts scene here.

We know how important the music scene is to Seattle. The amount of text messages and emails from people that are like, ‘What can I do? ‘ And I tell them, ‘Call your senator, call your reps.’ It’s amazing the influence you can have locally if you make a few phone calls because so few people do it. We don’t have any money, but we have time. We got human capital. We are flooding their phones.

This article appears in print in the December 2019 issue. Click here to subscribe. “Christmas as calamity” is Taylor Mac’s approach to the holidays and their attendant songs in this musical, maniacal show—and some form of audience participation is likely, so brace yourself. A Pulitzer Prize nominee and MacArthur “Genius” grant recipient, this NYC-based playwright, actor and cabaret…