My Latest, Greatest Food Find: Aardvark, the Curry Bus at the Pass, Plus More Food News 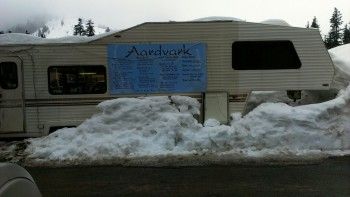 Before we get to the part about Canlis getting rammed by a big old construction truck (it’s true! And everyone’s fine), let me first tell you about Aardvark Food and Juice Bar. Dan, the owner, could be the nicest guy you’ll ever meet. He operates his little restaurant out of an old motor home by the 76 station at the top of Snoqualmie Pass, and boy do the locals love it; I’ve been urged to try the “curry bus” on three separate occasions this winter.

I finally dropped in yesterday after spending the day at Alpental: I’ll have a curry bowl, I said, although the tacos were tempting and, according to the woman I met while waiting, the mac-n-cheese is worth tasting, too. Soft Jasmine rice was scooped into the bottom of a Chinese takout box, then came the falling-apart-tender, slow-cooked chicken, a big scoop of coconutty red curry sauce, a hefty handful of shredded cabbage and a little cilantro. Yum. The words “authentic” don’t apply, but whoop-de-doo. I loved it. It hit the spot after snow shoeing up steep hills all afternoon, and it was especially good with a healthy dose of preserved chili sauce (Dan’s recommendation). That’s the other thing: Dan’s got about 20 varieites of hot sauce, which makes it fun. You can pick your poison.

I’m most excited, though, to see that Dan’s success is allowing him to refurbish an old train (pictures here), which’ll be the future home of Aardvark. It oughtta be great to see what Dan can do in a kitchen *not* inside of an old motor home.

In news of the closer-to-home variety:

Mid-day on Saturday, Canlis co-owner Brian Canlis posted this photo of a big ol’ truck, which had plowed off of Aurora Avenue and smacked into the back of the restaurant (no one was hurt, and the restaurant was able to open that night). Still: Yikes! This comes on the heals of Ocho’s near-miss on February 25th. Owner Zach Harjo had quite the sense of humor about the car that took out his outdoor seating (but didn’t, thankfully, hit the restaurant), joking that there was, “still no drive-thru” and posting a photo of the mess. Ocho is also now offering Crash-inspired cocktails including White Trash Sangria made with Wild Turkey. Love it.

Chico Madrid, the Spanish eatery and bar that I told you about in early January, is still on track to open in Capitol Hill in the next few weeks. Last week Franz Gilbertson told me that, “The build-out is wrapping up soon, we’re just waiting on some last minute things to fall into place, final inspections, and permits. Hopefully we’ll be going by the last week/end of March.”

And lastly, Food & Wine is once again crowdsourcing its award for People’s Best New Chef. Local noms include the chefs from Portland’s really impressive (you’ve gotta see the wood-fired grill they play with there) Ox, McCracken Tough (of Spur, Tavern Law, Coterie Room), Ken Norris of Riffle (PDX’s great new Pearl District seafood spot), and Chris Weber, the young chef heading the Herbfarm. There’s even a Top Chef contestant amongst the noms in the NW/Pacific, and I can tell you from a recent meal at Star Noodle, that Sheldon guy can really cook. Go on: Vote!