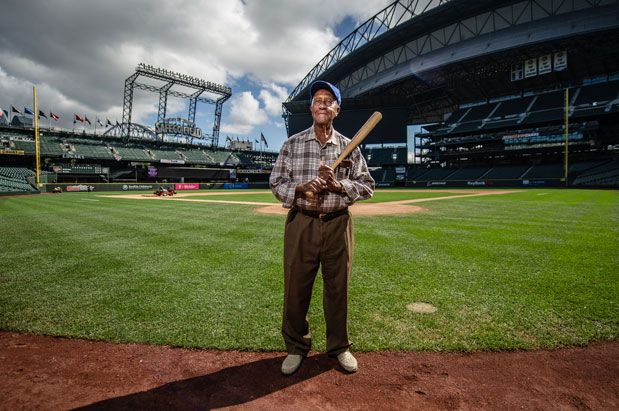 Herb Simpson shuffled into the gallery at the Northwest African American Museum in Seattle and eyed a magnified, black-and-white photo of the 1952 Spokane Indians baseball team on the wall. The picture was taken more than 62 years ago, but Simpson remembered playing on that team in the eastern Washington city—and taking that photo—with supreme clarity.

Simpson, who will be 94 years old in August, was visiting Seattle for five days as a guest of honor at the Seattle Mariners’ annual African-American Heritage Day on Sunday, July 27.

He is the last surviving member of the 1946 Seattle Steelheads, the only professional Negro Leagues baseball team in Washington state’s history. In addition to his time with the Steelies—which, much like the West Coast Negro Baseball League it helped form, didn’t last more than two months—Simpson spent time with other top-shelf pre-integration black baseball teams, including the Homestead Grays, Birmingham Black Barons, Chicago American Giants and the Harlem Globetrotters (the baseball version). He made history not once, but twice after Jackie Robinson broke the baseball racial barrier in the 1940s: His stay with the Spokane Indians in ’52 helped integrate the Western International League, while his ensuing stint with the Albuquerque Dukes the same year broke similar ground in the West Texas-New Mexico League.

It was for these reasons that members of the Mariners RBI Club booster organization went to great lengths to bring Simpson and his nephew, Felton Glapion, here for Heritage Day at Safeco Field. It’s the second consecutive year the lifelong New Orleans resident has made the trip.

I followed along during the events of Simpson’s stay, and his schedule would have exhausted even my 41-year-old body and mind: There was a lengthy photo shoot on Safeco Field’s sun-splashed turf and red clay; an error-filled, chilly Everett AquaSox Single-A game; meetings with a local author; and then the big day—the July 27 ceremony before the M’s game, in which he was recognized by the team announcer and received a standing ovation.

At each event, Simpson regaled his various hosts with stories from his life not just as a trailblazing baseball player, but also as a veteran of World War II. At the RBI Club’s monthly luncheon meeting on July 25, he saw a series of framed illustrations and biographies of some of the Negro League players who have been elected to the National Baseball Hall of Fame. Upon seeing an illustration of legendary pitcher Satchel Paige, Simpson spoke of the time in his NOLA hometown that he got two hits—a single and a double—off of Paige during a game, an achievement that spurred the affable Paige to treat Simpson to a Coke. Then there were the tales of his Army service during the war, when his unit arrived in Munich and dismantled an unexploded bomb so they could take home souvenirs of their incredible experience. In fact, despite his seemingly limitless collection of hardball memorabilia and mementoes at his Big Easy home, one of Simpson’s most prized possessions is the piece of bomb shrapnel that he procured in Europe seven decades ago.

And while he enjoyed the hospitality of Seattle’s leading baseball luminaries, including Mariners manager and seasoned Major League veteran Lloyd McClendon, who invited Simpson into the home clubhouse for a private meeting before the July 27 game, it was clear that those around him deeply appreciated the role he played  in Northwest baseball history even more.

“Just seeing him and knowing that he’s been through a lot and learning about him, it reminds me that he fought for what he believed in, and he deserves this [recognition],” Kennedy Catholic High School student and baseball player Malcolm Prevo said. Prevo was one of two local teens who read poems composed especially for Simpson at the NWAAM reception. “Without people like him, I wouldn’t be able to play the sport I love like he did.”

Look for part two of our “Negro Leaguer Marks Triumphant Return to Seattle” series on Seattlemag.com

Ryan Whirty is a freelance writer based in New Orleans who specializes in sports history and, in particular, the Negro leagues. He holds two degrees in journalism from Indiana University with a master’s concentration in African-American studies. He is a regular contributor to Baseball America magazine, and he has written for ESPN.com, The Hockey News, and several newspapers and magazines.