From nerd hangouts to, geeky fashion to a geeky blast from the past, here's our ode to Seattle's ner 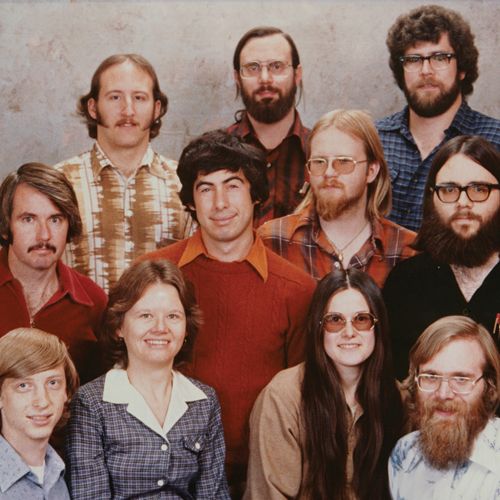 Double nerd points go to the Seattle Public Library for erecting a downtown pleasure dome dedicated to the pursuit of reading, as well as upgrading neighborhood libraries to pass ecological muster. Our citizenry passed the “Libraries for All” bond measure with a whopping 72 percent approval in 1998, and that resulted in the creation of downtown’s Crystal Palace as well as the renovation of many local libraries, including the Ballard branch, which boasts solar panels and a “green roof” to aid insulation and reduce runoff. Seattle’s reading population continues to vote with its feet and mouse fingers: According to the most recent poll (2009), pocket-protected patrons visited the library system or used its online resources more than 14 million times.

NERD VARIETAL
SIFF Nerd
Attention, attendees of the Seattle International Film Festival: Have you checked yourself for the early warning signs of a condition known as SIFF Nerd?
• Bone or joint pain from standing at the front of long lines, comparing how many movies you’ve seen with other platinum pass holders
• Nagging or persistent spouse, wondering if you really needed to see every showing of Metropolis
• Burning desire to recite lineups from previous years’ festivals to anyone who will listen
• Growing thickness or lump in the part of your wallet where you keep your old ticket stubs
• Paleness from spending hours in a darkened theater just when the Seattle weather is starting to get nice
Urgent: There is no hope of recovery if you already possess “Fool Serious” status—available to full series pass holders. (The group has its own website, foolserious.org, and gives out its own separate SIFF Awards.) Instead: Enjoy the show!

EXHIBIT A: Jenny George
Sasquatch Books administrator George doesn’t believe in pants. The bespectacled Ballardite dresses in bold, monochromatic dresses and skirts found at local indie havens like Velouria. “I’m a girly girl,” George says of her sexy, old-school-librarian vibe. “I only wear dresses and heels, even to the grocery store.” She accessorizes her throwback look with vintage accessories that suit her spunk, ranging from bold family heirloom necklaces and knee-high stockings to her collection of 1950s Lucite purses.

EXHIBIT B: Mychal Cohen
Musician Cohen (his orchestral rock band Campfire Ok releases Strange Like We Are this month) describes his style as one part preppy nerd, one part form-fitting classic. “I like to be concise, yet quirky,” Cohen says. “But well-fitting pants are non-negotiable.” Cohen rolls up his trim-fit pants to show off desert boots or boat shoes, and tops off his look with a thick-collared sweater or his favorite military- surplus peacoat. While he always buys pants from Levi’s, the vintage fiend combs the racks for garments and his  collection of retro eyeglass frames. NERD RESOURCE
Seattle-Geekly.com
If you’re wondering where to find out about hot, superhero-themed costume parties, game nights and zombie conventions that might have escaped your radar, or hoping to read a review of the Battlestar Galactica: The Exhibition show at the EMP/SFM (on view through 3/4/2012), your search is over. Seattle-Geekly.com offers regular updates on all things local and geeky (including a helpful Geek Week calendar, so you can pace yourself). According to co-creator Matt Hammond, the clearinghouse gets about 5,000 unique visits per month. “For those of us that grew up pre-Internet, it was easy to feel isolated and was often difficult to find a community of geeks outside your immediate circle of friends,” says Hammond. “We try to provide a connection to the larger geek community through the podcast, website and social media.” In 1978, a group of talented—and notably hairy—software types gather for what turns out to be a momentous photo: Microsoft’s 12 founding employees, including Bill Gates (front left) and Paul Allen (front right), just before the group moves the company from Albuquerque to the Eastside and begins the climb to computer domination via often glitchy, complex operating systems. In 2008 a group of talented—and notably hairy—musical types gather for what may prove to be a momentous a photo: The 5 founding members of baroque-folk Seattle band the Fleet Foxes, including Robin Pecknold and Skyler Skjelset (who grew up together on the Eastside), just as they begin their climb of the musical charts via often catchy, complex harmonies.

NERD ALERT!
Closet Nerds
Seattle’s nerdiness goes so deep that even people you think are too hip to be square possess secret geek credentials. Behold, a few of our city’s nerds-in-disguise.
By Jennifer Lee

Dimitri Kieffer
Known as: Extreme adventure racer (once did the Iditarod on foot)
Secret nerd cred: Two degrees from the UW in international trade; 15 years at Microsoft

Dave Dederer
Known as: Guitarist and founder of The Presidents of the United States of America
Secret nerd cred: English literature degree from Brown; master’s coursework in urban planning at the UW

NERD GENRE
Nerdcore Music
For a primer on Nerdcore, a niche hip-hop aesthetic in which lyrics cover pressing issues relating to Dungeons and Dragons and/or Star Wars, look no farther than Kirkland-based nerdcore band Death*Star (deathstarhiphop.com). “We rap about what we love, where we came from and what’s real in our lives,” says MC-3PO (aka Jess Hart). With songs about sci-fi, Saturday morning cartoons and building your own robot girlfriend (“Bride of Dorkenstein”), the band promises to “deliver the finest product from a dude’s basement as we possibly can.” Perhaps not surprisingly, Death*Star’s lyrics are totally awesome, such as these for “Not Geek Enough”:

Girl you have to be sympathetic
For the pursuits in my life are McKellen magnetic
Call me positively geeky, but you’re negatively nagging
Texas Instrument, calculating all the time I’m wasting
So I drop you like a franchise game, focus on the now
Devote my energies to Half-Life, Ninja Gaiden and WoW
Beam me up to a screening of an anime classic
Never heard of Akira!?!?  My Kaneda’s gone flaccid
Baby you’re not geek enough for me
That’s just the 8-bit reality
Baby you’re not geek enough for me
I’d say live long and prosper but you’d miss my meaning In related news, we seriously regret to inform you that Seattle’s literary death-metal band BlöödHag is no longer producing eardrum-rupturing songs about famous sci-fi and fantasy authors, having played its final concert last spring. But we strongly encourage you to watch the documentary short BlöödHag: The Faster You Go Deaf, The More Time You Have to Read (streaming at wholphindvd.com/web-films/bloodhag), which follows the band on its King County Library “edu-core” tour. Do androids dream of electric earplugs?

If you’re too busy to go outside and see for yourself, check out Seattle RainWatch (atmos.washington.edu/SPU), the brainchild of UW meteorologist and locally worshipped weather guru Clif f Mass (cliffmass.blogspot.com), who proposed the “now-casting” system to give a neighborhood-by-neighborhood view of real-time precipitation. Puget Sound precipitation levels are tracked in one-, six-, 12-, 24- and 48-hour intervals, and forecasts are updated by the hour. Still not enough weather data? You can also hit refresh on the “Instant Precip” page as often as you need to.

*Did You Know?
Bill Nye the Science Guy, who first gained fame as the mad experimenter on the local sketch comedy show Almost Live!, didn’t just play an inventor on TV. He has earned U.S. patents—for a magnifying glass made with water and an abacus that works like a computer—and is developing an improved toe shoe for ballerinas.

*Man vs. Machine
Local Jeopardy! champ Ken Jennings is back—and ready to take on a supercomputer! During his celebrated 2004 winning streak, Jennings went 74 consecutive shows undefeated. But does he have the smarts to beat a brainy IBM computer named Watson? Find out in a three-part episode airing February 14–16 on KOMO 4.

In less bike-savvy cities, people might think “recumbent” refers to someone who is still in elected office. Here in Seattle, we know it’s the way we get to the office. All-weather shorts, wrap-around goggles, plastic front-mounted bug shield, wool socks with Birkenstocks: Plan to wear it loud and wear it proud if you buy one of these laid-back bikes.

GEEKS IN SPACE
To the moon!
The space race is back! And this time it’s personal. Apparently, everyone wants to leave the Earth, especially our abundant cadre of local tycoons. • Charles Lindbergh won a whopping $25,000 prize for his transatlantic flight in 1927. Now the goal is civilian space travel and the prize has grown to $10 million, thanks to the Ansari X Prize, which was won by local rocket fanboy Paul Allen and his SpaceShipOne team.
• Not to be outdone is Amazon.com CEO Jeff Bezos, whose company Blue Origin is using its $3.7 million stimulus package award to develop a system for manned space flight. While Amazon was launched in Seattle, Bezos’ current launch pad has moved to west Texas, where vertical take-offs and landings do not draw as much attention from air traffic control.
• Seattle’s own LaserMotive recently won $900,000 in a contest at the NASA-sponsored 2009 Space Elevator Games. LaserMotive aims to prove the feasibility of using power-beaming systems for launching satellites and other objects into orbit above the Earth. A warning to free-agent Seattle Mariners: You could become one of those “other objects.”
• Back here on Earth, astronaut Bonnie Dunbar and the Museum of Flight have launched a fundraising campaign to bring one of the retired space shuttles to its aerospace station in South Seattle. (To donate, visit museumofflight.org.)