Geek Fests! If there were any doubt as to Seattle’s nerd cred, one need look no farther than the eno 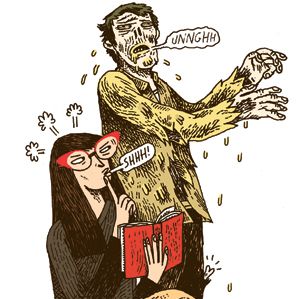 Emerald City Comicon
March 4–6; Washington State Convention Center, Seattle; emeraldcitycomicon.com  Who attends: Secret superheroes.
Why go: Dating back to 1970 in San Diego (and 2003 in Seattle), this is a mecca for comic book enthusiasts—and with good reason. If the countless local and international comic book vendors don’t do it for you, perhaps the celebrity appearances will get your heart racing. (This year promises William Shatner!)

For a more intimate approach, try the Jet City Comic Show (9/24; jetcitycomicshow.com) the single-day event said to be for serious comic book fans.

Norwescon
April 21–24; Doubletree Hotel, SeaTac; norwescon.org
Who attends: Bookish sci-fi fans.
Why go: While the convention (which, since 1978, has ranked as one of the largest regional sci-fi/fantasy conventions of its kind in the U.S.) features costumes and gaming, people primarily attend to fulfill literary desires. Each year, the Philip K. Dick Award is presented to the most distinguished and original science fiction novel of the year.

Sakura-Con
April 22–24; Washington State Convention Center, Seattle; sakuracon.org
Who attends: Obsessive and festively costumed otaku, that is, fans of Japanese animation.
Why go: This annual convention is a lively celebration of anime, manga, gaming and, of course, karaoke.

Seattle Antiquarian Book Festival
October 8–9; Seattle Center Exhibition Hall; seattlebookfair.com
Who attends: Paper-loving people.
Why go: Esteemed vendors show off (and sell) their antique book selections, from tomes about 18th-century music to first editions of The Wizard of Oz. If you can’t wait until October for your literary fix, stop by the Exhibition Hall on May 21–22 for the Seattle Book and Paper Show (seattlebookandpapershow.com)—a similar affair with a more contemporary focus.

Silent Reading Party Monthly Hotel Sorrento
hotelsorrento.com
Who attends: Book nerds tired of reading with their cats.
Why go: It’s the sophisticated version of snuggling up on the couch with a book, and takes place in the lush Fireside Room of the Sorrento Hotel. Warm up with a drink and spend the first Wednesday evening of every month being bookish and unsocial in public.

PAX Prime
August 26–28; Washington State Convention Center, Seattle; paxsite.com/paxprime
Who attends: Game players.
Why go: This gaming extravaganza (aka Penny ArcadeExpo, founded in Bellevue in 2004) draws upward of 60,000 attendees, all clamoring for console, tabletop and computer game exhibitors, nerdcore concerts and panel discussions. Festivities culminate with the final game of the Omegathon, in which randomly selected people compete in a grand challenge for a grand prize (past years have featured Skeeball and Tetris).

BrickCon
October 1–2; Seattle Center Exhibition Hall; brickcon.org
Who attends: Anyone who’s ever wanted to live in LEGOLand.
Why go: LEGO enthusiasts from across the country showcase their architectural know-how in constructing interactive and intricate displays. Don’t miss Tacoma-based Certified LEGO Professional Dan Parker, whose incredible achievements include a 10-foot-tall LEGO Statue of Liberty.

FIRST Robotics Competition
March 17–18; Qwest Field Event Center, Seattle; firstwa.org
Who attends: Mr. Roboto and friends.
Why go: This three-day tournament, featuring 100 teams of high-school-age competitors from across the region, is the local culmination of an annual robot designing and building project funded by tech giants, including Microsoft and Boeing. Winners head to the national championship in St Louis, MO!

Dorkbot
Meets on the first Wednesday of every month; Usually at Jigsaw Renaissance on First Hill, 7 p.m.; dorkbotsea.org
Who attends: Mad scientists.
Why go: It’s the Seattle branch of a worldwide Dorkbot army, described as “people doing strange things with electricity.” Drop in to discuss and get feedback on your latest project or invention. If you need inspiration before becoming a Dorkbot yourself, watch for the group’s public events—presentations and installations by local artists and inventors.

Seattle Power Tool Race and Derby
June 26; Georgetown; hazardfactory.org
Who attends: Industrial hacker dads and the families that love them.
Why go: Why not transform that rusty chainsaw in the garage into a shiny new racer? Registration is open to the public, and the race itself may be the noisiest and most raucous you ever attend. As the website says: “Bring your own safety glasses and Band-Aids!”

The Sprocket Society
Dates vary; Northwest Film Forum; sprocketsociety.org
Who attends: Celluloid junkies.
Why go: The Sprocketeers celebrate film preservation through film screenings (as in actual film, not digital or video) and classes on the history of cinema in an attempt to “stave off the digital takeover!” Begun in 2007 as a series of backyard screenings in Ballard, the society now holds regular film events at the Northwest Film Forum. This month (2/9), see Michael Snow’s classic experimental film Wavelength (1967).

Christmas Bird Count
Last saturday in December; Local parks; seattleaudubon.org
Who attends: Birders who enjoy counting.
Why go: This annual bird count is the longest-running citizen science survey in the world. Small teams of birders comb the greater Seattle area with binoculars in tow and eyes peeled in a quest to contribute to the National Audubon Society database. Naturally, you can follow the count as it’s tweeted on Twitter (twitter.com/SeattleAudubon). Monsters of Accordion Tour
usually December; monstersofaccordion.com
Who attends: Not your polka-loving grandma.
Why go: This annual West Coast tour is organized by Seattle accordion god Jason Webley and features a rotating selection of accordionists whose styles range from glam rock to zippy zydeco.

Decibel Festival
September 21–25; Venue T.B.A.; dbfestival.com
Who attends: Serious techno lovers.
Why go: During this five-day music fest—founded in Seattle in 2003—top names in the electronic music industry hunch over their laptops and turntables to share thumping bass beats and energizing techno melodies.

Everyone knows about the recent outbreak of local TED groups, where eager learners spend hours soaking up esoteric info from experts. But where can you share those things that you’re the expert on?

* The PechaKucha (Japanese for the sound of “chit-chat”) craze is sweeping hundreds of major cities, including ours. PechaKucha nights are the great nerd equalizer: Anyone can participate, as long as he or she is willing to show 20 slides (on any topic), speaking about each one for only 20 seconds. Everyone’s an expert at PechaKucha. To find out where you can show slides of your niece’s art projects or photos of your trip to Greece without having enough time to bore everyone silly, visit pecha-kucha.org/night/seattle/.

* Or, check out Ignite Seattle (igniteseattle.com), where participants get five minutes of fame (adjusted for inflation) on stage, to “inspire, teach or just make people think.” Recent events have included talks on bridge building using Popsicle sticks, a rundown of whale parasites, advice on “How to Get 5 Million People to Read Your Website” and a primer on surviving cancer. If you doubt learning how to sand-cast spare robot parts in your garage will cause potential love interests to beat a path to your door, stick around for five minutes to find out about online dating.

All illustrations by Josh Holinaty