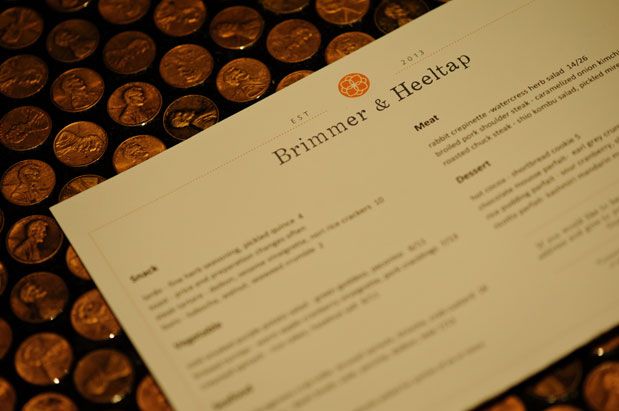 I know from experience the sheer rapture a new restaurant can bring to a neighborhood that was once pretty much void of them. When Delancey, Honore, Essex and Fat Hen opened within relative walking distance of my East Ballard neighborhood, I finally felt less relegated to the far less hip side of Ballard.

I imagine the folks a several blocks over are feeling that same way now. Save for the beloved Veraci pizza across the street and the funky little coffee shop Slate, there wasn’t a neighborhood spot for the fine folks of this area of East Ballard/lower Phinney/North Fremont since Le Gourmand closed its door in June. But even when the exquisite Le Gourmand was open, it wasn’t exactly a drop in and have a drink and a bite sort of place.

I imagine there will be much rejoicing starting this Wednesday, when Jen Doak’s Brimmer & Heeltap (Ballard, 425 Market St. brimmerandheeltap.com) celebrates its grand opening. At a media preview last night (full disclosure: samplings of the menu were provided at no cost), I sat down with Doak—formerly of of Post Alley’s The Tasting Room wine bar and one of the hardest working, most genuine restaurant people I’ve met in my 15 years following Seattle’s food scene as editor of Seattle magazine—and chef Mike Whisenhunt, beloved former chef at Revel and Joule, to get a taste of their new place that Doak describes as a “bistro meets a pub”. (About that name: Brimmer refers to a full pour and Heeltap is that last drop in the glass; Doak says, “I like everything that happens in between.”)

What’s happening on the East side of Ballard, with all these fantastic restaurants opening in humble, residential neighborhoods reminds me of what’s been happing the last few years in Portland’s restaurant scene. Not every hottie-hot restaurant is in the Pearl and environs. Most are across the river, dotting random neighborhoods. Ballard is already a bit like being on a cruise ship already with its all-inclusive options, so why not continue to laze out and bring the trendy restaurants even closer to your doorstep? Windows! There are windows! Doak and  Whisenhunt uncovered grown-over windows in the old Le Gourmand spot. Clever use of fairly everyday fixtures. Doak collects menus locally and from her travels. They now paper the wall of this two-top nook in the back room, adjacent to the patio. $750 worth of pennies cover the floor of the back room. A project Doak says she is happy to pass on tips to anyone who wants to recreate the look. She also designed the restaurant’s menu herself, to fold up into a self-mailer so diners can brag to their friends about their latest food find. (Photo: Rachel Hart) Fans of Whisenhunt’s Korean/Asian influenced food at Revel will not be disappointed. The eclectic menu has lots of reminiscent flavors (like this broiled pork shoulder steak with carmelized onion kim chi ($9 for small, $17 for a very large large), but there are plenty of local “Northwest” dishes too. Neighborhood restaurants like these should be affordable, good for them. I love when restaurants have a “thing.” Here, there are many things, but “Buns” are perhaps the most catchy of them. Sweet/salty/briney vegetarian Asian baked buns filled with kabocha (Asian squash) and topped with a caramel glaze. (Photo: Rachel Hart) To quote Shrek, “Everyone loves a parfait!” is the motto here. All their desserts are parfait style, and the chocolate mousse (pictured center)—a whisper fluff rendition that chef Whisenhunt apparently always brings to family functions—is deceptively light and not overly sweet.

The menu is simple, short and easy to navigate. Groups of six get to over off a special menu that has huge portions and low prices. And –hallelujiah—they have late night dining, from 10 to midnight. We are so going here after the school auction this year.