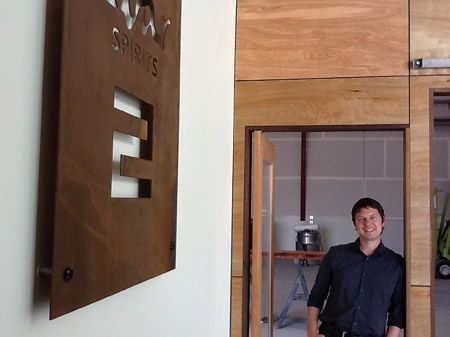 For Nathan Kaiser, it’s all about the hard work of his grandfather and his grandfather’s fathers before him. Five generations of his family worked the land of the 2 Bar Ranch in Texas, which still exists to this day and conjures images of the era when men were men, and by that I mean in a very Marlboro sort of way.

Kaiser says his grandfather teases him for having “soft hands,” the hands of a microbiologist who has spent the last few years of his life as the COO of a small, high-end Seattle tech company called Blue Box. But now with two young sons of his own, Kaiser is setting out to get his hands dirty by honoring another family tradition – making good hooch – and as he puts it, “have something to pass on to my boys.”

Adopting the 2 Bar name he still sees on the gates of his family’s ranch, Kaiser has gotten through much of the permitting process necessary to start actually producing vodka and gin out of his newly-renovated Sodo warehouse space. He is putting the finishing touches on a tasting room built around hardwood and iron accents from locally reclaimed materials where he can showcase his robust brand of spirits.

Kaiser’s Washington State wheat-derived gin and vodka is “going to have a bolder flavor,” he says, “something stronger you can connect with.” There will also be a moonshine he promises will be be a “light whiskey with a little bit of sweetness form the corn. It should be smooth and easy to drink.” Eventually, he also plans to introduce aged whiskey and bourbon.

Production is scheduled to begin in about two months, Kaiser says. In that time, he may not be able to show his grandfather the new callouses on his hands in person, but he’ll at least be able to send a darn good bottle of liquor down to the ranch in Texas.

You can fallow Kaiser’s progress on the 2 Bar blog at 2barspirits.com/blog.