As we celebrate 100 years since the construction of the Ballard locks and ship canal, we look back on how carving out Seattle’s waterways forever reshaped our landscape and economy.

By Niki Stojnic, In partnership with Jennifer Ott, David Williams and the staff of HistoryLink 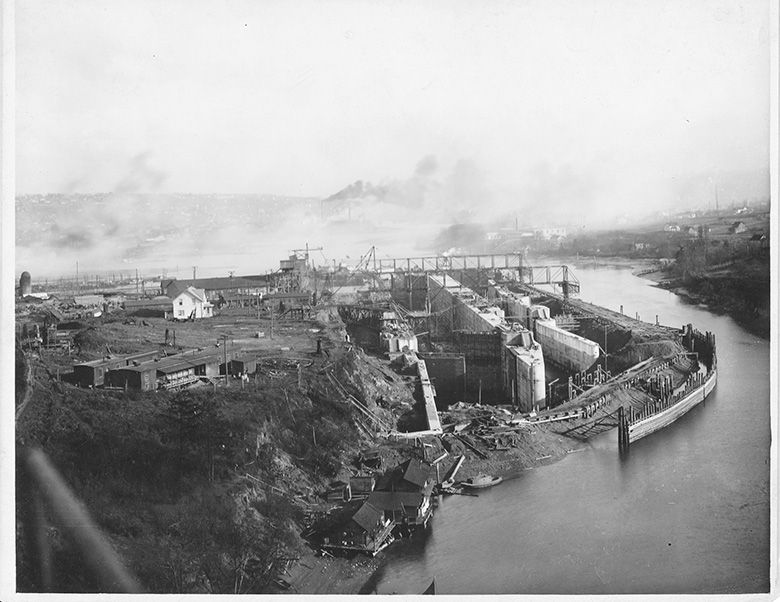 Seattle’s new downtown tunnel is an engineering marvel, but its trials and tribulations have nothing on another transportation phenomenon, one that took six decades to materialize and forever changed the city: the Hiram M. Chittenden Locks in Ballard and the Lake Washington Ship Canal.

The locks, which turn 100 this year, together with the ship canal, connect Lake Union, Lake Washington and Puget Sound. These three bodies of water, so close together but originally separated by land, sparked the imaginations of settlers with ambitions to make Seattle a trade and commerce center.

Seattle pioneer Thomas Mercer first suggested joining the lakes and the Sound in 1854, when Seattle was only 3 years old.

In a new book, Waterway: The Story of Seattle’s Locks and Ship Canal (HistoryLink, 2017, $24.50), Seattle author and environmental historian David B. Williams, writer Jennifer Ott and the staff of HistoryLink dig into the history of this crucial piece of Seattle infrastructure.

Photograph courtesy of Mohai. The festive flag bunting on the building at right was part of the celebration to dedicate Fishermen’s Headquarters on January 10, 1914, later renamed Fishermen’s Terminal. The area in the foreground was later filled with dirt and is now the parking area for Fishermen’s Terminal. In the background are sawmills that were located in Ballard. This photo was most likely taken from approximately where Nickerson Avenue is today.

The locks and ship canal opened the region’s waterways to maritime commerce, and Seattle became a major port city, with nearly 50,000 vessels a year traveling through the locks on their voyages to and from the Sound. The waterway provided a route for boats to bring cargo to and from the region, from oil and steel to hats and coats, and to push and pull tons of logs into Lake Washington from logging camps around Puget Sound. And many new maritime businesses also opened on the shores of Lake Union and Salmon Bay, including boatbuilders, sawmills and William Boeing’s first seaplane factory.

Over time, the traffic traveling through the locks changed. Where once most of the traffic consisted of commercial boats, today it’s mostly pleasure boats, which visitors wave to as they watch the locks being raised and lowered. The waterway is also a major salmon run. “It works so well,” says Ott. “It’s hard to think about the city without it.”

Hundreds of people worked on this project, with all types of backgrounds, from U.S. Army Corps of Engineers workers to day laborers. Because there are so few written records that provide the perspectives of workers, Ott says, it’s challenging to tell that human part of the locks story, to balance the mechanical details of the work that went on. However, she and Williams pieced together what they could from various accounts, including background on the instrumental work of Chinese laborers before those workers were run out of the area during riots in 1885 and 1886.

Today, we take their labors for granted as the parade of boats slip easily from lake to Sound. Photograph by Army Corps of Engineers. Predictably, cutting a channel across the width of Seattle—a process that changed water levels—had major environmental, cultural and business impacts. One business affected was Captain Burrows Summer and Winter Pleasure Resort, located on Lake Washington’s outlet to the Black River in Renton, approximately where the Renton Municipal Airport is today. The resort was left standing in the marshlands rather than at water’s edge, and it closed in 1916.

Boat Parade
there will be a series of events through the summer celebrating the 100th anniversary of the Hiram M. Chittenden Locks, whose official birthday is July 4, 1917. A highlight is a boat parade on July 9 from 11 a.m. to 2 p.m., which will re-create the parade that floated through the locks on their grand opening in 1917. The parade will include two of the boats that were there 100 years ago, the GloryBe and the Keewaydin (originally called Honey Boy). The HistoryLink book published for the centennial, Waterway: The Story of Seattle’s Locks and Ship Canal, will have a release party at the Museum of History & Industry on July 12. (See makingthecut100.org for additional events and updates.) Photograph by Renton Historical Museum. Before the ship canal was built, the Black River ran through Renton, as seen in this 1911 photo. Water was drained from the river, essentially drying it up (there is a remnant of the river near the King County South Treatment Plant). The new outlet for the lake was the ship canal. The pastoral area depicted in the photo is now the area between the Renton Municipal Airport and Tukwila. Photograph courtesy of Mohai. On August 25, 1916, the waters of Lake Union and Lake Washington flowed together as workmen allowed water to fill the finished Montlake Cut. In 56 minutes, 45 million gallons of water filled the cut. If this photo were taken today, no doubt spectators wouldn’t be allowed so close to the action. The photographer who took this photo was likely standing in an area that’s now West Montlake Park. Photograph by Puget Sound Maritime Historical Society/mohai. From 1918 to the 1940s, when whale hunting was still legal, North Pacific Sea Products’ whaling vessels, known as killer boats, wintered in Lake Washington’s Meydenbauer Bay in Bellevue. From that anchorage, the ships could easily navigate to Puget Sound through the locks. Today, expensive homes surround the bay, and boats and yachts are moored along the docks of the Meydenbauer Bay Yacht Club.

Photograph by U.S. government. This circa 1960s aerial view shows (from left) how Puget Sound, Lake Union and Lake Washington, are connected. Connecting these bodies of water required excavation to create the Montlake and Fremont cuts. Look closely and you can see the Fremont and Montlake bridges. Photograph by Seattle Municipal Archives. This shows Union Bay after the lake was lowered and large amounts of land were exposed on the northern end; these areas are now (from north to south) the University of Washington’s (UW) Center of Urban Horticulture, Union Bay Natural Area, the UW Golf Driving Range and the UW Montlake parking lots. You can also see Husky Stadium. Photograph courtesy of University of Washington. This circa 1916 photo depicts Union Bay before the Montlake Cut was opened and before Lake Washington was lowered. The land in the distance is now the Laurelhurst neighborhood.

Making the Upgrade
Improvements are in the works for the small visitor center at the Hiram M. Chittenden Locks and the viewing area of the salmon ladder.
The current visitor center is housed in the 1916-built blacksmith shop; upgrades will expand the center into the nearby 1941 warehouse, and a structure connecting the two historic buildings will be built as the “welcome gallery.” The salmon ladder viewing center, which hasn’t had a major upgrade since 1976, is getting an ambitious face lift. Plans there call for year-round educational programming and a theater-like viewing area.
It will be a few years before these projects see completion, however, as money needs to be raised for both projects, says Rich Deline, director of The Corps Foundation (which works with the Army Corps of Engineers). The foundation is overseeing improvements and raising funds for them. Deline expects the fish ladder improvements to begin in mid-October when the salmon runs end. For updates or to learn how you can help, visit ballardlocks.org. Photograph by Army Corps of Engineers. This picture looking east, circa 1917, of Salmon Bay and the completed Ballard locks shows the original facilities buildings and the lockkeeper’s residence, now called the Cavanaugh House, the official residence of the chief engineer of the Army Corps of Engineers’ Seattle District. The Ballard Bridge is in the background, and the smokestack is from one of the Ballard sawmills. Photograph by Cascadecreatives. This 2016 picture of the locks and ship canal looks east. On the left side of the photo are moorages along Shilshole Avenue near downtown Ballard, where sawmills once stood. Magnolia is on the right. Fishermen’s Terminal and associated businesses fill the Magnolia side of the canal. In the foreground is the Burlington Northern Santa Fe railroad trestle.