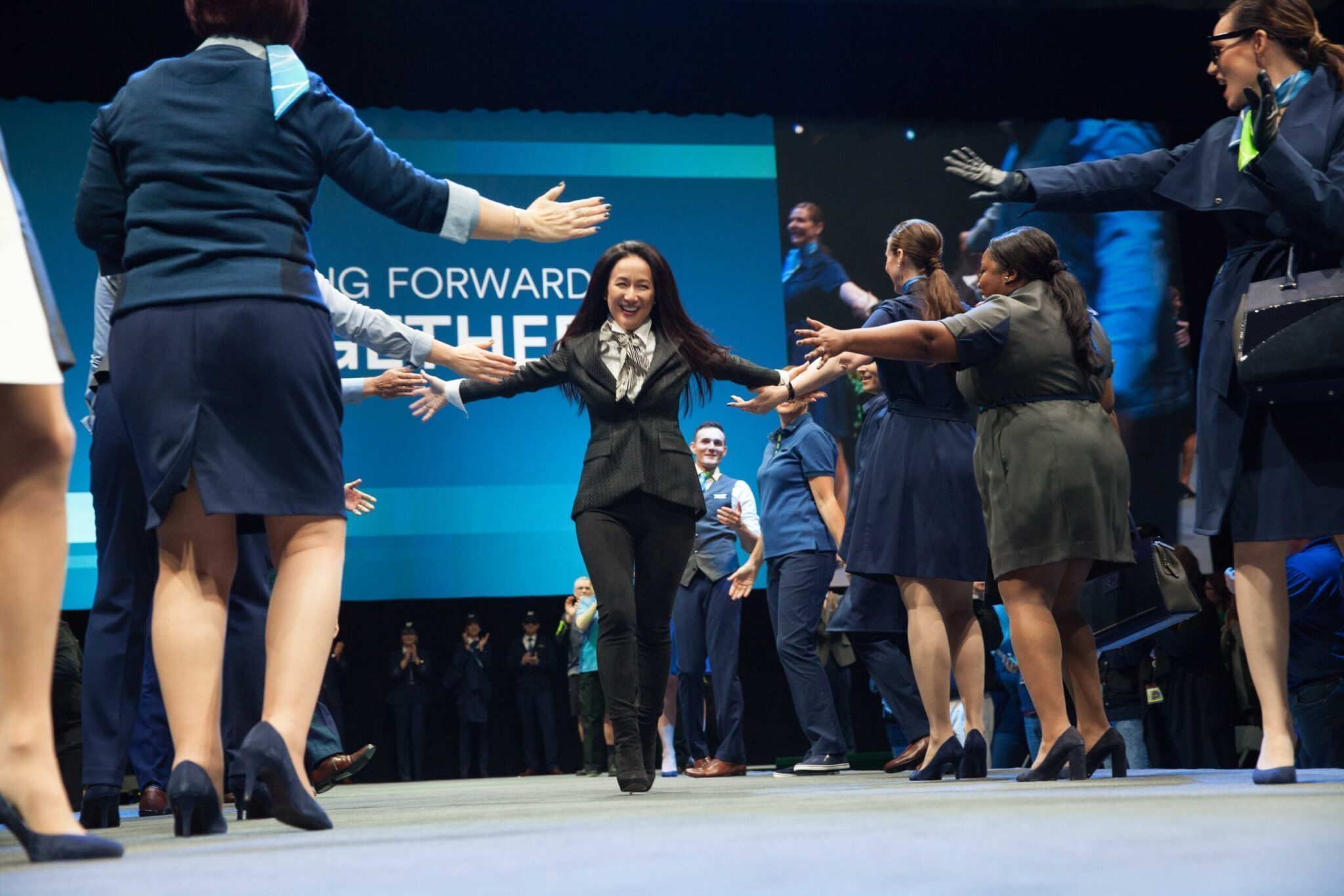 All photos by Hayley Young.

Alaska Airlines debuted a new uniform collection with more than 90 items–clothing and accessories– designed by the darling of Seattle’s fashion scene, Luly Yang, on Thursday. Thousands of Alaska and Virgin America Airline employees filled an airplane hangar at SeaTac that had been fitted with a 30-foot runway and three large screens to ensure that everyone had a chance to see the new looks, modeled by Alaska employees, that have been two years in the making. “When I met Luly, I knew we had something special,” said Ben Minicucci, Alaska Airlines chief operating officer. “Not only is she from Seattle but she loves Alaska and she got us. She started listening to our people and understanding our culture.”

Let’s just say she got it right.

Yang, who is renowned for her sculpted couture cocktail and evening gowns, sent a collection of uniforms down the runway imbued with navy and cobalt blues, charcoal and taupe grays, crisp white and pops of tropical green. The new pieces ranged from athletic-inspired polos and soft-shell tops for group operations employees to tailored suit jackets for the captains.

Yang’s signature body-conscious tailoring, perfected over the course of 15years designing her made-to-measure creations, was evident across the collection. Specifically, a flight attendant color block dress created with a form flattering seam across the bodice could easily complement any body type, as so beautifully demonstrated by the employee models wearing them. The collection also included several women’s suit jackets with cinched waists, slanted pocket flaps and sculpted shoulders, a far cry from the airline’s current boxy silhouette.

Some of the delightfully unexpected components of the new look are the personal but practical touches. Tina Hendrickson, a flight attendant who donned a navy pencil skirt, white button down and suit jacket, pointed out a pocket built into the lining that perfectly fits an iPhone, which all attendants have on hand for in-flight purchases. In addition, Yang added a rubber set band along the waist of the skirt to keep the shirt from pulling out of place on the job.

Thoughtful, elegant and oh-so-Luly accessories are another major facet of the airline’s new uniforms. A series of grey, blue and white scarves give a nod to the retro look of the Pan Am era while also showcasing the curvature of the Alaska swoosh, an element introduced in the brand’s redesign last year. Meanwhile, University striped ties in the same colorway added polish to some of the gentlemen’s uniforms. Yang also designed stylish gray and navy touchscreen-enabled gloves.

And let’s not forget the outerwear. In the middle of the fashion show, the audience erupted in cheers as one of the models strutted down the runway in a navy fit-and-flare coat. Embellished with an oversized hood, deep pockets and stylish belt, it’s no wonder one of the attendees was overheard asking if the coat would be available for purchase (sadly, none of the items will be available, not even the fabulous purse). For the pilots, Yang crafted a sophisticated brown leather jacket detailed with center and side seams and exterior pockets over the chest.

And, oh the pockets. Pockets were everywhere, including sleeve pockets for ground control and maintenance staff, perfect for stashing ear plugs, wrenches and the like. All a result of Yang’s extensive research and dozens of focus group interviews with employees to determine what they needed out of a uniform.

Starting Monday, 130 Alaska employees will wear test the new designs over the course of 60 days. The rest of the employees will have to wait until 2019 for the company-wide rollout. Following the wear test, a couple of the pieces will surely be scrapped (four dress designs presented for flight attendants, for example, will be narrowed to two)As our hometown airline begins to show off its new look, it is clear that Yang’s goal of making Alaska employees shine has been accomplished.

See photos by Hayley Young from the event below. Luly Yang, the uniform designer, takes her bow along with the employee models. A navy and grey soft-shell jacket designed for maintenance employees. Layers are a major component of the airline’s new look as seen with this heather grey quilted vest. A classic menswear suit jacket is reimagined with a block of navy along the lapel and slanted side pockets. A flight attendant wears a one of the collection’s more modern pieces, a grey and navy dress with a flattering white seam. A classic dress silhouette is designed with contrasting blocks of navy fabric. A sculpted navy overcoat is worn by a flight attendant. The ladies’ trench coat from behind complemented with a large bag in shades of blue. A traditional menswear uniform is made modern with contemporary tailoring, button details and a multi-colored necktie. Alaska Airlines partnered with OEKO-TEX to ensure that each uniform receives STANDARD 100 certification, one of the most progressive textile standards in the world. A pilot’s ensemble is accented with a custom designed brown leather bomber jacket. A male pilot wears his version of the new leather jacket.