We went to the store and skipped checkout for Day One of Amazon's latest experiment. 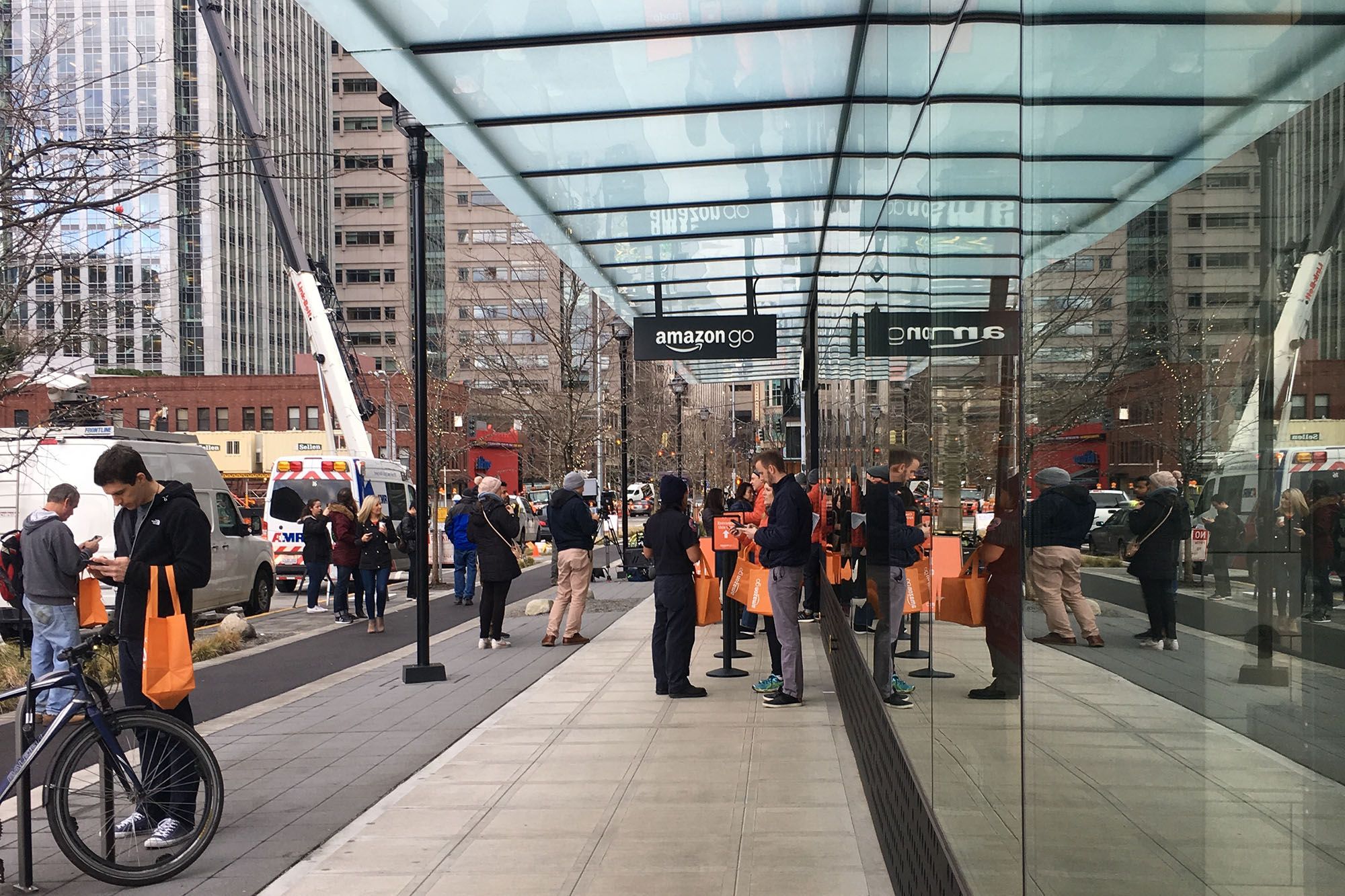 Hundreds of shoppers clutching free orange tote bags crowded into the fairly snug Amazon Go store in downtown Seattle on opening day, lots of them snapping photos, shooting live vids, some even buying stuff. It was just the kind of buzzy scene PR teams dream about for the premiere of the brave new world of retailing.

It’s called “Just Walk Out Shopping.” Even says so on the exclusive white mugs with orange type on the shelves. At the first-ever location — you know there will be more because this is gonna be a big hit — there are no shopping carts, no cashiers. You simply download the Amazon Go app, scan it to get through the turnstile entry, fill up your bags and exit. Nothing to scan, no lines. The ultimate grab-and-GO — with sensory cameras monitoring from all angles. Take something off the shelf, it’s added to your Amazon acccount. (And, no, you don’t have to be a Prime member to get the app.) Early reports compared the novel set-up to a 7-Eleven, 2.0. All due respect to the home of the Slurpee, but NO WAY. The 1,000-plus items on the shelves and in the coolers are smartly curated. The flow of the small-ish footprint seems to move people along well. When I asked one of the people restocking what were the best sellers so far, he answered: Everything. And, yes, there were quite a few mildly annoying signs in empty spaces saying: “So Good, It’s Gone.” What made me most excited, though, was seeing so many local favorites among all the national brands. Makes absolute sense, given that Amazon is a local company, right?

For that reason alone, I’m likely to add this to my shopping mix. That doesn’t mean I’m giving up on my go-to spots at Pike Place Market, QFC, Met Market, Ballard Thriftway, Home Remedy or TJ’s, of course. This is a conveinence store, but much more.

Here are the top local items you really should consider sticking in your shopping bag:

Macrina Bakery is well-represented, its breads and pastries doing that sweet soft sell within lots of packaging. (Wish all the packaging throughout was a little more minimalist, so there’d be less going into the landfill, but maybe that’s something that can happen down the road.) Essential Baking Company is also in the mix with its organic treats — gimme that chocolate croissant! — and rustic loaves. There’s all sorts of Theo Chocolate bars, including one made exclusively for the story, a 70 percent dark chocolate organic fair trade bar with sea salt, tucked into a wrapper that reads: “Good Food Fast.” Miss Marjorie’s Plantain Chips from the owner of Marjorie Restaurant are some seriously fine snacks. Better get two boxes because they go fast! Firefly Kitchen Kimchi offers that good-for-your-gut balance after eating all those goodies. A forkful a day keeps the flu bug away. Works for me, anyway. There’s no fresh fish or meat, but you can purchase Rub With Love seasonings from Tom Douglas. The four-bottle variety pack from Scrappy’s Bitters will help make your cocktails even more sippable. And bravo on the excellent Northwest-centric lineup of beer, cider and, especially Washington wines. Don’t forget your ID because you’ve got to show it before you can browse that section of the store. On the quick bites, and meals-ready-to-eat after a trip to the microwave, I spotted offerings from Blazing Bagels, Molly’s, Alki Bakery and Eat Local. Also, the Amazon branded meals were created by a team that includes chef Jonathan Hunt, long time fixture on the Seattle culinary scene who helped open Boom Noodles and ran Lowell-Hunt Catering from the late 1990s until 2006. Does this approach seem fresh and novel or does it mean we’re just one step closer to the end of the world as we know it? The answer is yes and probably, yes. But that’s not necessarily a bad thing.

One final note: If there ever was a sharp reminder that Amazon’s more of a data-mining operation than a retail giant, it arrived on a my iPhone shortly after downloading the app. A text message with an offer for some kind of special deal from Amazon. For me, that’s a big No GO!