Seattle and Washington political leaders were also on hand for the official opening ceremony for Seattle's newest urban landmark. 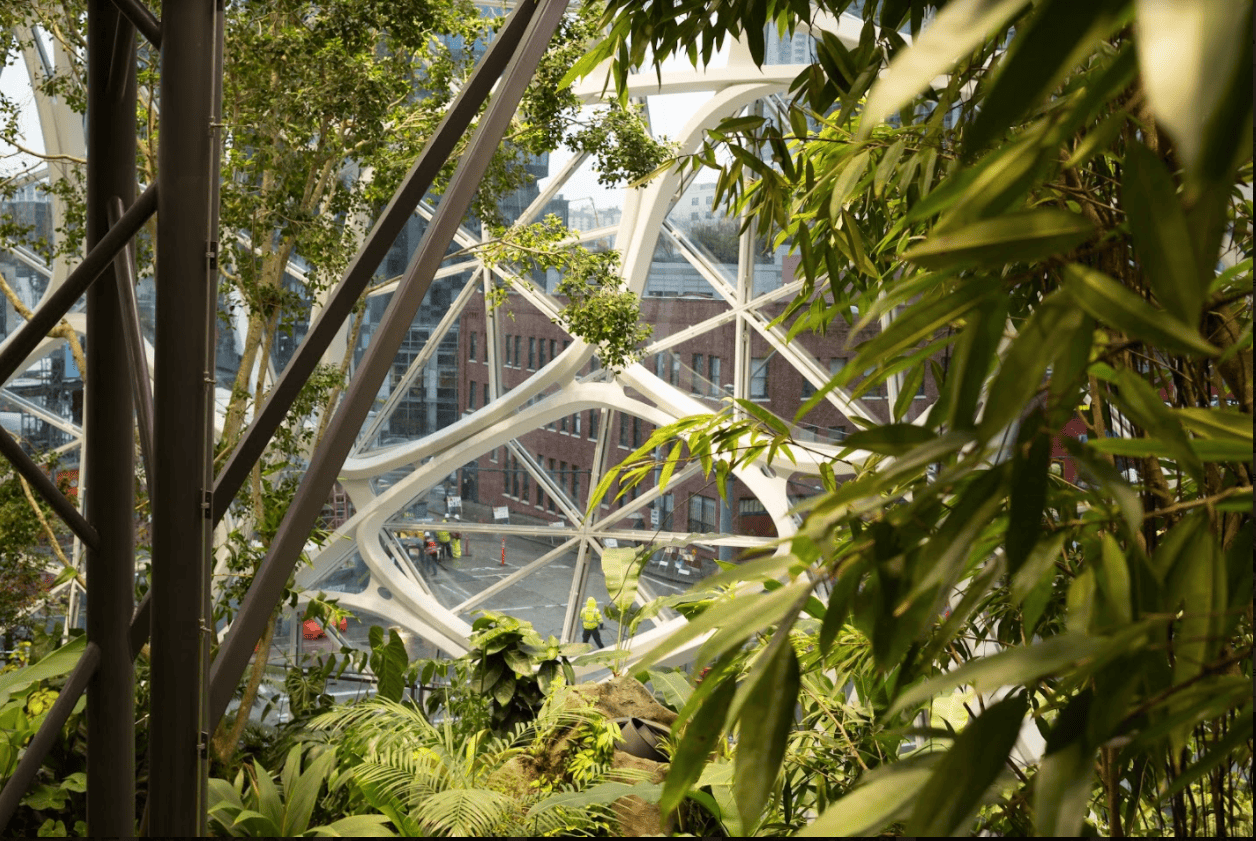 And with that, the signature piece of Amazon’s $4 billion campus in downtown Seattle was officially alive.

The Amazon CEO and co-founder (and the world’s only hundred-billionaire) made a rare public appearance in Seattle to celebrate the opening of The Spheres.

Before employing his “special friend” Alexa (see video above) to do the grand opening, Bezos thanked John Schoettler, vice president of global real estate and facilities at Amazon.

“There’s someone here who needs a gigantic thank you, and of course, it’s John Schoettler,” said Bezos. “John has taken so much care; there is so much professionalism; he’s detail-oriented; he’s’ organized, he has operational excellence. But the thing that makes all of his contributions stand out is that he has heart. And it shows in everything he does, including these beautiful spheres. So, thank you, John.”

Despite Amazon’s sometimes (well, often) divisive presence here in Seattle, the political leadership on hand was effusive in its praise for the city’s largest corporate tenant.

“I, like the governor and the executive, really applaud Amazon for its work to make us a better city,” said Mayor Durkan.

Amazon’s place in the city was a common theme, and many of those who spoke about the company’s work in Seattle with projects like Mary’s Place (which was mentioned multiple times by multiple speakers). Its work with other Seattle businesses on the Spheres project also struck a chord with the friendly audience.

The Spheres were designed by NBBJ.

For now, those who work at the Seattle company will be the only ones who will be able to access the main space of The Spheres. The Understory, which is not attached, will be open to the public beginning tomorrow, Jan. 30 (The Understory will be open Monday to Saturday 10:00 a.m. to 8:00 p.m., and 11:00 a.m – 7:00 p.m on Sunday. It’ll also be accessible through HQ tours).

Amazon hasn’t closed the door to public access to The Spheres, permanently, but don’t expect that to open up any time soon. Spokesman John Sa said they are “looking to create that opportunity in the future,” but added that the structure has an 800-person capacity, and Amazon has 40,000 employees at its downtown headquarters. So, perhaps once those employees have had a chance to spend time in their brand new building, it’ll then open up to be enjoyed by Seattleites.

So what’s in those giant glass domes (which, inside, feel like one giant building and not three separate structures)? Quite a lot. See the full list of details about the spheres below, and stay tuned for more content here on seattlemag.com.

The Spheres Blossom at Amazon’s Urban HQ in Seattle

The Spheres—the newest buildings on Amazon’s campus in downtown Seattle—have no enclosed offices, conference spaces, or desks, and employees can meet in treehouses suspended under 40+ foot trees or in sitting areas and walking paths alongside cascading waterfalls

Plants, trees, sunlight, soil, and water take center stage – the sound of running water and the scent of flowering plants create an instant botanical immersion that takes visitors far away from the urban landscape

The project created more than 600 full-time jobs, and is part of Amazon’s more than $4 billion investment in the design, development, and construction of its Seattle HQ

The Spheres will be open to provide educational opportunities to the Seattle community through tours, field trips and partnerships with local schools and universities

SEATTLE–(BUSINESS WIRE)–Jan. 29, 2018– (NASDAQ: AMZN) — Amazon today announced the opening of The Spheres, the company’s newest Seattle HQ buildings that are home to more than 40,000 plants from around the world. There’s no place else in the world quite like The Spheres – a spot where Amazon employees can work in an environment that’s more like a tropical rainforest in the clouds than an office. Plants, trees, sunlight, soil, and water take center stage – the sound of running water and the scent of flowering plants create an instant botanical immersion that takes visitors far away from the urban landscape. The Spheres are a result of innovative thinking about the character of the workplace and an extended conversation about what is typically missing from urban offices – a direct link to nature. Studies suggest that spaces that embrace biophilic design can inspire creativity and even improve brain function.

“Our goal with The Spheres was to create a unique gathering place where employees could collaborate and innovate together, and where the Seattle community could gather to experience biodiversity in the center of the city,” said John Schoettler, Amazon Vice President of Global Real Estate and Facilities. “I am very proud and thankful to the entire team who made The Spheres a reality – they did a terrific job from the design all the way to the finishing touches. We are thrilled to officially open the doors.”

The Spheres feature treehouse meeting rooms, river and waterfall features, paludariums, a four-story living wall, and epiphytic trees. They are home to more than 400 species spanning five continents and 50 countries, and many of the plants have journeyed from botanical gardens, tree nurseries, and conservation programs from around the globe. Many of the plants inside The Spheres are from cloud forest ecosystems, where plants thrive on mountainsides at an altitude ranging from 3,000 to 10,000 feet. Plants in these ecosystems have adapted to cooler temperatures, which makes their climate needs comfortable for people, too.

Amazon is committed to sharing the beauty and biodiversity inside The Spheres with the public, and will provide educational opportunities to the Seattle community through tours, field trips and partnerships with local schools and universities. The Spheres also include a visitor center – called The Understory – that is open to the public year round. The Understory provides a fully immersive, 360-degree experience where visitors can get up close and personal with the science, engineering, and plants behind The Spheres.

“The Spheres are sure to become an iconic part of downtown Seattle, and I applaud Amazon for its latest innovation,” Gov. Jay Inslee said. “These unique buildings are so much more than a beautiful creative space for Amazon employees. They will help conserve a number of rare plant species from around the world and provide countless educational opportunities for local students – and that’s something Washington can take pride in.”

“Seattle is the coolest city in the country, leading the way with innovative urban projects like The Spheres. This unique landscape will bring together students, visitors, and residents in the heart of our City,” said Mayor Jenny Durkan.

“The most delightful design feature of Amazon’s Spheres goes far beyond bringing natural beauty into Seattle’s urban core,” said Toby Bradshaw, Professor and Chair, UW Department of Biology. “The use of plant biodiversity — including the ‘weird’ and ‘ugly’ specimens — to tell the story of interconnections among living things will be an inspiration to all who visit and work at The Spheres.”

Learn about The Spheres, The Understory, and how to visit on www.seattlespheres.com. For regular updates about the plant life inside The Spheres, follow @SeattleSpheres on Instagram.

Find out about opening day: https://blog.aboutamazon.com/amazon-campus/the-spheres-blossom-in-seattle

The Spheres were built to create a wide variety of ways to communicate, work and dine on five different levels in the backdrop of dramatic plant installations including living walls, paludariums and treehouse gathering spaces. Below are a few facts about The Spheres, as well as what visitors will find within and around them:

Over the past 30 years the University of Washington has cultivated a world-class plant collection at the UW Botany Greenhouse (9,000 specimens, 3,000 species). This past summer, the building was torn-down to pave the way for a new, state-of-the-art greenhouse facility. Amazon is providing a home to all of these plants at a greenhouse in Woodinville, WA while construction is taking place, providing the space and care to keep the collection thriving for future UW students.

The UW plant collections are a vital component of UW Biology’s missions — research, teaching, and public outreach. Indeed, the outreach mission alone brings thousands of visitors annually to the greenhouse — K-12 students and their teachers, garden clubs, horticultural societies, photographers and artists, and Seattleites looking for warmth and light in midwinter! UW has also shared some plants for use in The Spheres, and there will be many more such opportunities to share resources and expertise as Amazon and UW Biology move into their respective homes.

In addition to the on-going conservation efforts inside The Spheres, Amazon puts its scale and innovative culture to work for sustainability in many other ways. By the numbers:

50 – Last year, Amazon announced a goal to have over 50 fulfillment facilities with solar on rooftops by 2020. You can read the announcement and watch a video about the project here.

55 – About 55% of employees at our Seattle headquarters get to work by walking, riding bikes, or taking public transit. It’s one of the big benefits of an urban campus.

3 million – That’s how many square feet we’ll be heating in Seattle using recycled energy from a non-Amazon data center across the street from our buildings. It’s an innovative project called ‘District Energy’ and it’s 4x more efficient than traditional heating.

3.6 million – To date, Amazon has announced or commenced construction of a total of 3.6 million megawatt hours (MWh) of renewable energy.

360 Million – Amazon’s packaging initiatives (like Frustration-Free Packaging and Ships in Own Container) eliminated more than 215,000 tons of excess packaging as of 2017. That’s 360 million boxes avoided.