Kirkland is one of the few U.S. cities where self-driving cars are being tested. How else are state and local leaders preparing? 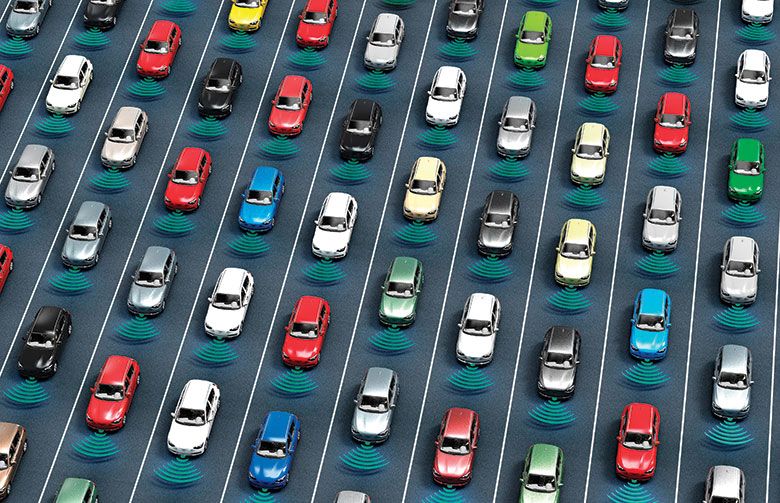 Kirkland drivers may have noticed a Lexus RX suburban utility vehicle with a black rooftop dome traversing the local streets. While there’s been someone sitting in the driver’s seat, that driver’s hands probably haven’t been on the steering wheel. Kirkland is one of a few cities nationwide—Austin and Pittsburgh are among the others—where self-driving cars are being tested to see if hundreds of split-second decisions instinctively made by a human driver can be replicated by an onboard system of sensors and computers, in real-world counterparts to The Jetsons and the movie I, Robot.

There’s still a lot of debate about the future of self-driving cars (also called autonomous vehicles), but action last June by Washington Governor Jay Inslee points to the confidence that many have in this futuristic technology. Inslee issued an executive order that calls for a light touch regarding state regulations on the development of autonomous vehicles—good news for the 20 or so Washington-based firms researching and testing the various gizmos.

Inslee—and Seattle’s Department of Transportation director, Scott Kubly—are among those who see the potential of self-driving vehicles, citing possible benefits, such as vehicles being shared so they rotate to whoever needs them at that moment, cutting the number of carbon-spewing cars on the road; less need for parking, with shared self-driving cars in motion rather than idle in parking spaces; fewer speeding infractions, with cars programmed to follow speed limits; the elimination of drunk drivers from the road; fewer auto-related accidents and deaths caused by human error; and more freedom for people who currently are unable to drive.

Whether self-driving vehicles will prevent—or cause—accidents has been a point of contention in early testing; a few accidents involving self-driving cars have made headlines. But Inslee points to national statistics indicating that 94 percent of automotive deaths are caused by human error, and Bruce Agnew, director of The Cascadia Center, a Seattle-based transportation policy center, notes: “Planes are flying on autopilot technology because of previous crashes. The reality is that computers are safer than humans.”

But among the big questions that Inslee, state legislators and city officials must grapple with is how quickly the autonomous vehicle technology will develop, and what kind of regulations will be needed before these vehicles become commonplace (if they ever do) on our roads.

Experts agree that autonomous vehicles are likely to come to us in stages, such as those mapped out by SAE (Society of Automotive Engineers) International, which sets worldwide professional engineering standards. SAE International’s stages have become part of the common language that engineers, traffic experts and legislators have begun using to discuss the topic. The stages are:

Level zero: No automation. The driver is in control.

Level 1: Driver assistance. This includes features such as cruise control and parking help.

Level 2: Partial automation. This may include steering, acceleration and deceleration assistance; cars currently have this technology available.

Level 3: Conditional automation. The vehicle does much of the driving, but a driver is available to intervene—or in the words of the SAE guideline: “the human driver will respond appropriately to a request to intervene.” A Level 3 car—the Audi 8—is scheduled to go into production in 2018.

Level 4: High automation. The vehicle does the driving; a human driver is present, but should the self-automated system request help, the driver isn’t required to respond. Or in other words, if a dangerous or ambiguous situation presents itself and the self-driving system can’t figure out what to do, it will park the car if a driver doesn’t step in to help. Some experts say this level could be ready for government testing in 2021, but others say it’s at least 10–15 years away, if not longer.

Level 5: Full automation. There is no driver.

The Madrona Venture Group, a Seattle venture capital firm, is much more optimistic than anyone else about how quickly Level 5 will be reached; in a recent report on the topic produced by the firm, it predicted just three years until this technology is ready. Daniel Li, a co-author of the report and who researches new investments for the firm, explains: “We based our prediction on the timelines announced by car manufacturers to deliver Level 3 and above autonomous vehicles. The progress on autonomous vehicles has been quicker than we originally expected a couple years ago,” he says, comparing the speed of development to that of smartphones.

Whether the technology is ready in three years, or 10, it is moving quickly—and government tends to move more slowly, notes state Representative Zack Hudgins, chair of the House State Government, Elections and Information Technology Committee who has an interest in the technology. That’s why it’s important to put together a list now of items that need to be addressed, he says. “It’s easier now to prepare questions. Then we’ll get to solutions later.” In other words, the state Legislature still has a lot of homework to do on self-driving cars and their technology before any bills can be drafted to regulate them.

That’s more or less the same situation in which the City of Seattle finds itself. A three-person team has been assigned to monitor what the area’s 20-plus autonomous vehicle firms are doing, while also researching what issues the city will have to address when self-driving cars are advanced enough and plentiful enough to require regulation. Among the things the team is considering: whether the city government or a corporation—similar a phone company or a cable services provider—should build and maintain the master computers, transmission towers and data storage facilities that self-driving cars will require.

Last year, the University of Washington’s Tech Policy Lab issued a report titled “Driverless Seattle,” which also raises questions and issues that need to be considered.

Ryan Calo, a University of Washington associate law professor and one of the co-authors of the report, offers this scenario: If four self-driving cars all reach the four points of a no-stoplight intersection at the same time, which car goes first? A tricky question with four human drivers. Trickier still with four vehicles that each have a different onboard computer from four different manufacturers, says Calo.

Calo notes that dozens, if not hundreds, of matters like this need to be addressed before the driverless technology can safely exist in the real world. Among the issues raised in the report, and by legislators, city officials and others interested in the self-driving cars are these: How will cars with human drivers and those with different levels of autonomous technology co-exist on the same road? In case of an accident involving one or more self-driving cars, who has liability? How will police “pull over” a self-driving car suspected of being used in a crime, such as drug smuggling? Who will be responsible for computer malfunctions in case of an accident? Is it OK for children to be alone in a self-driving car? Do passengers in an autonomous vehicle have any legal responsibilities? What kind of privacy issues will be involved with a technology that will depend on constantly collecting and transmitting data?

These questions just scratch the surface.

While experts and government officials are busy compiling lists of questions, there are a few things they agree on: More information is needed about how the technology will evolve before it can be intelligently regulated, and it’s unpredictable how quickly that will happen. But the biggest question is “when” not “if” this technology will be part of our future.

As Agnew of The Cascadia Center notes: “It is going to come faster than most people expect. This is what technology companies are telling policy leaders.”

With any luck, those policy leaders will be ready with the necessary regulations and support when these vehicles actually hit the road.