Ballard Dad’s Diagon Alley is Getting Even Bigger; ‘Star Wars’ Up Next

The Seattle man whose Harry Potter recreation made worldwide news is already planning for next year. 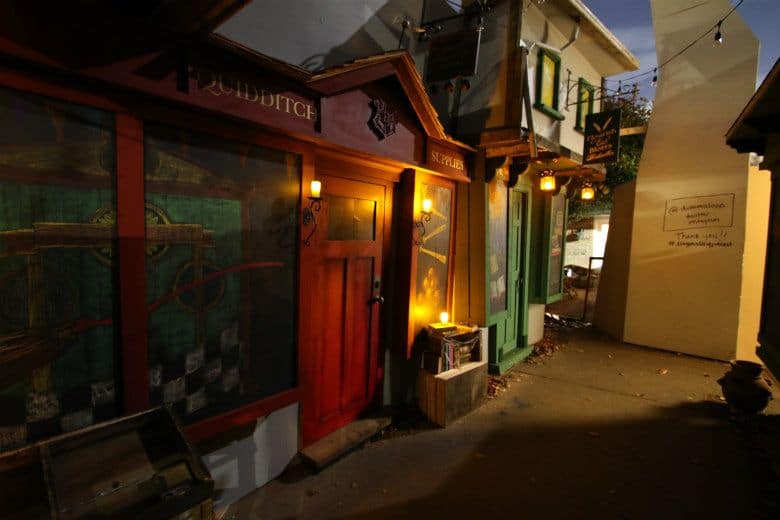 A world of witchcraft and wizardry is thriving in Ballard. Local dad Jon Chambers has constructed a replica of Harry Potter’s famous Diagon Alley in the driveway of his Seattle home. A series of facades duplicate shops like Quality Quidditch Supplies, fantastic beast emporium Magical Menagerie, magical bookstore Flourish and Blotts and others. The fruit of two weeks of furious labor—he and neighbors began construction October 14—it opened on Halloween and attracted more than 2,600 visitors and trick-or-treaters that night.

But just because Halloween has come and gone does not mean the festivities have ended. The whole exhibit will stay open through New Year’s Eve, and will only expand until then. Chambers has arranged for a Dumbledore Santa to be available for pictures the first weekend of December, with specific times forthcoming on the project website.

Additionally, Chambers plans to construct two more structures in the coming weeks: Gringotts Bank at the back end of the Alley and the Leaky Cauldron tavern out front that, just as in the books, will serve as the bridge between the non-magical world and the enchanted cobblestone entrance to Diagon Alley. Unlike the rest of the shops, which are just storefronts, Chambers plans for both Gringotts and the Leaky Cauldron to have interiors, which will serve as play-spaces for visiting kids.

“Building will begin later this week on Gringotts,” he says. “Once that building is finished I will get started on the Leaky Cauldron. With volunteer help and good weather, I expect that each building will take a little over a week to build.”

And if Harry Potter is not your cup of tea, just wait for next year. Chambers is keeping the details to himself for now, but says he already knows what beloved series he wants to tackle next: Star Wars. 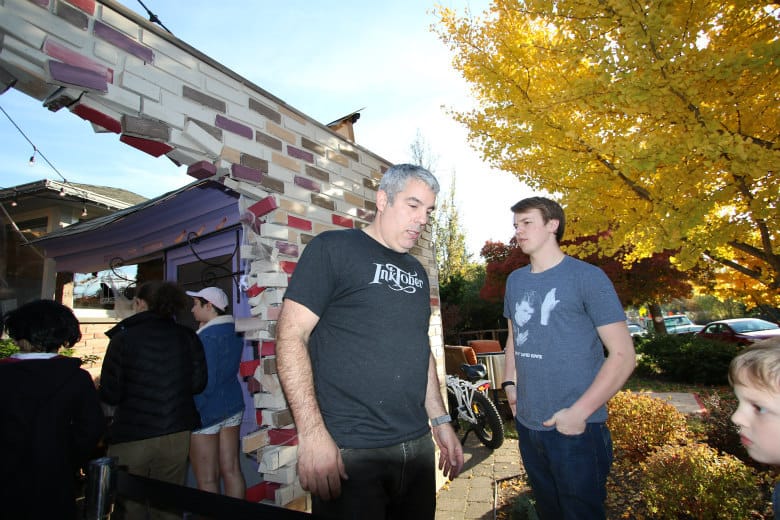 Chambers is energetic and the outpouring of excitement the alley has generated as news has spread like Fiendfyre online (it’s even being reported in Germany) has only added to his enthusiasm. While it’s free to walk down the recreated alley, visitors can leave donations to help fund pancreatic cancer research. So far, Chambers has raised more than $4,000 in cash and he estimates they have generated much more online on behalf of a family friend who died of the disease.

When the exhibit comes down in the new year, Chambers plans to auction its various components off for charity. Gringotts and the Leaky Cauldron’s sales will benefit the Whittier Elementary PTA (he lives across the street from the school) and he is still looking for an organization that would get good use out of the alley storefronts.

A veteran of the tech industry, Chambers conceptualized the installation and drafted sketches beginning last summer, but realized the only way he would have the time to construct it was if he left his job. So, he did. Now seeing all the positivity and generosity his work has inspired, he has begun to dream of working on similar projects for a charitable organization.

It’s a sentiment that resonates in the world today and, imagining he brings more of our childhood fantasies to life, one that is sure to attract more followers, even as he takes us to a galaxy far, far away.