The Best Bellevue and Redmond Neighborhoods Near Light Rail 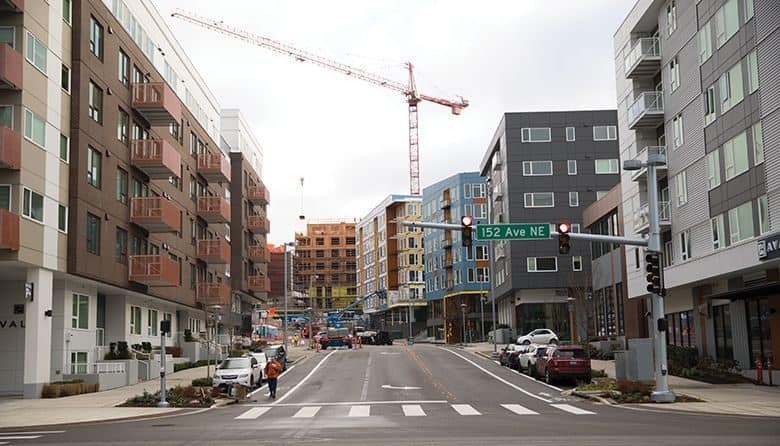 Last spring, when clients of Ann Pierson, a Compass real estate agent, picked out a second home in Overlake—a Redmond neighborhood that hugs a border of Bellevue—for their parents, she expected the sale to go through without a hitch. The 2,300-square-foot house was priced at about $1 million and it didn’t really have any particularly “special” qualities. But her clients ended up competing with four other serious offers, and paid 15 percent over the list price in order to snag the house.

It speaks to Overlake’s current status as a hot neighborhood. 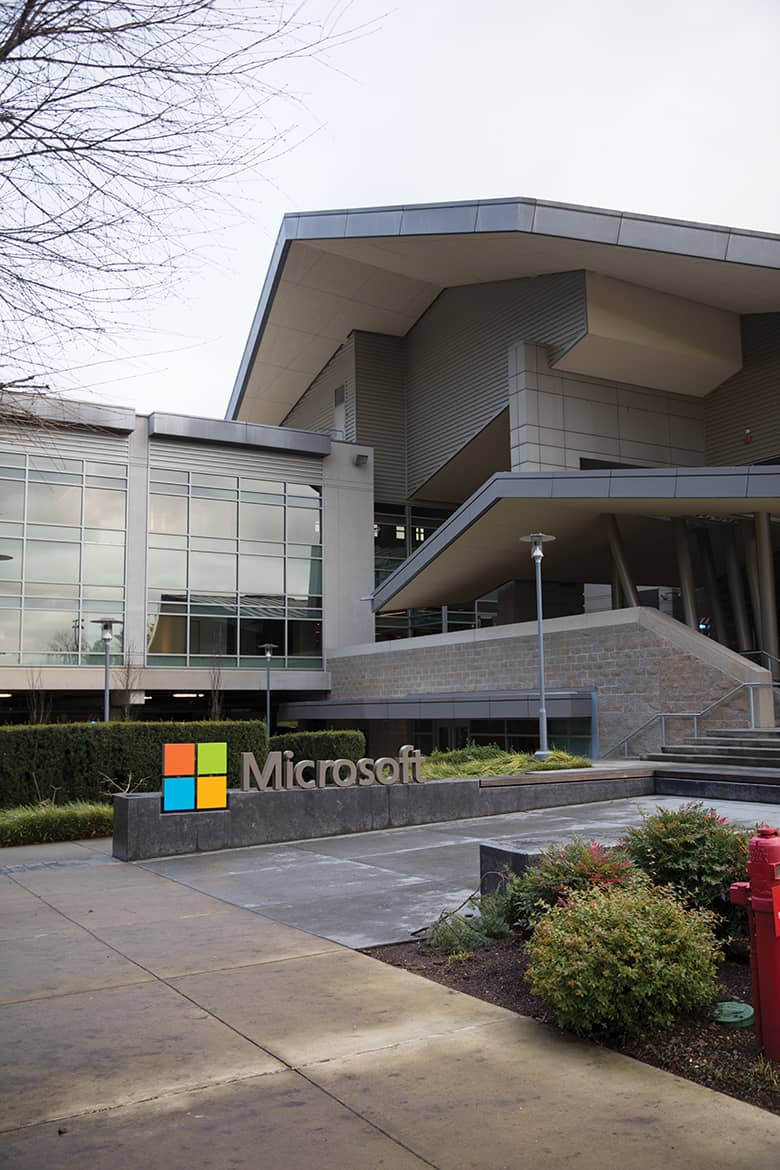 The Microsoft campus dominates the area

After Microsoft found a home for its headquarters in Overlake more than 30 years ago, the neighborhood experienced something of a housing boom, with tech employees settling in the area. Now, with a light rail station set to open in 2023 and a noticeable increase in the types of housing options available in the neighborhood, with everything from condos to single-family homes, the area is one to watch. 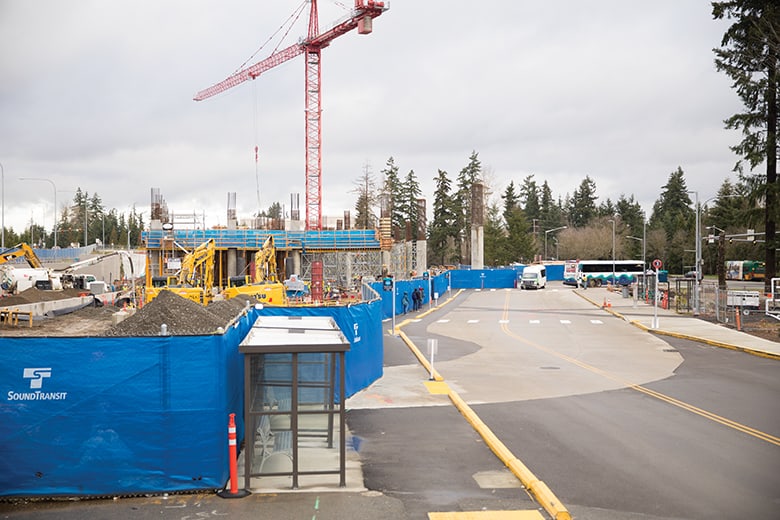 Construction of the new station is hard to miss

Although parts of the neighborhood feel commercial, with wide boulevards that are heavily trafficked and lined with strip malls and tech businesses, it also has a wide array of beautiful high-end homes built in about the 1990s, along with condos and apartments. It’s also very convenient, as it sits right next to State Route 520 and offers residents a user-friendly system of city buses (and if you’re a Microsoft employee, there’s also the company’s Connector buses).

“If you want to be ahead of the curve and get in by the light rail and take advantage of what’s going on and sort of the shift of urban neighborhoods, then the Overlake area is the easiest place to buy in,” says Pierson. 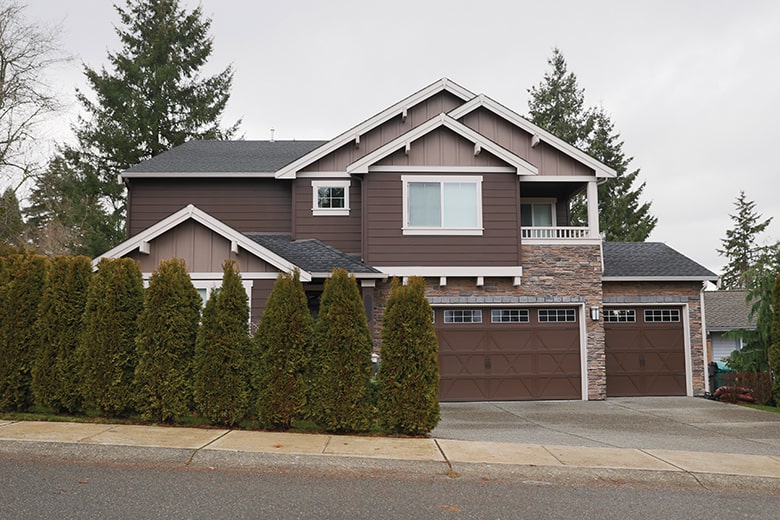 A single-family home in the neighborhood

The neighborhood is also home to a wide array of international residents, including families from India, China and Pakistan, along with a series of extremely popular international restaurants and boutique shops.

Fun fact: From Microsoft’s approximately 500-acre campus to Nintendo of America, Overlake is a true tech center and Washington’s third-largest employment center, with about 46,000 jobs. The City of Redmond predicts that number will grow to 70,000 by 2030.

ALSO CONSIDER
Bridle Trails
This Bellevue community is just a 10-minute drive from Overlake, but it might as well be in another part of the country. The heavily wooded residential neighborhood is adjacent to Bridle Trails State Park, which is crisscrossed by beautiful horse trails. Coupled with nearby estate-quality homes, it has a tranquil countryside feel. 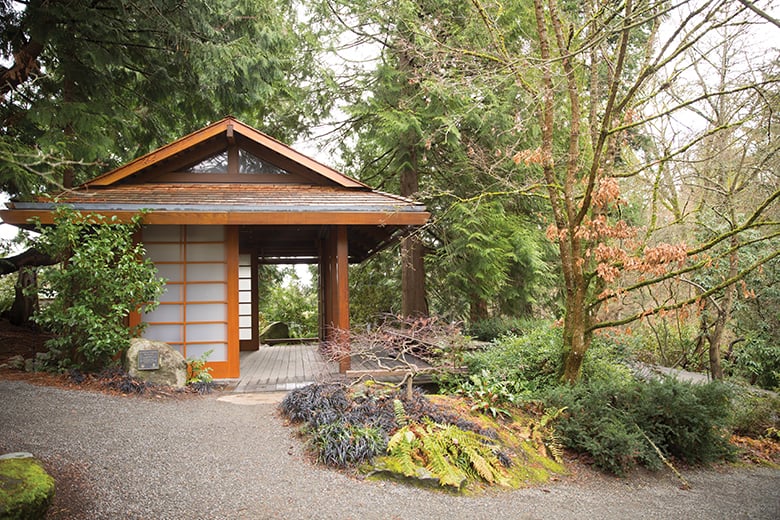 A prime attraction in Wilburton is the Bellevue Botanical Garden

The Bellevue neighborhood of Wilburton, originally founded as a logging town around the turn of the previous century, has come a long way since those days. 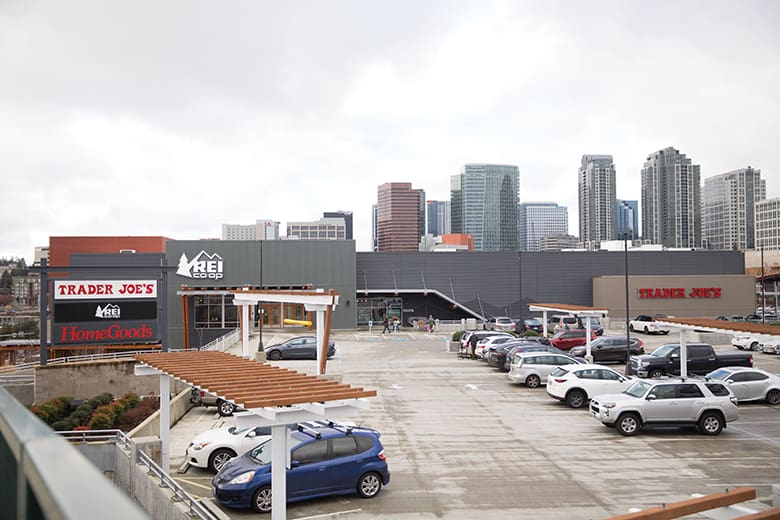 REI and Trader Joe’s, on the west edge of the neighborhood, opened in 2016

In recent years, the traffic has picked up with the appearance of big-box stores between 116th and 120th streets, most recently with the addition of an REI and a Trader Joe’s. These businesses join its already popular assortment of shops, including Best Buy, The Home Depot, Whole Foods and Uwajimaya. And if Wilburton doesn’t have what you’re looking for, the neighborhood is conveniently located between two major shopping hubs: downtown Bellevue and the Crossroads Shopping Center. A home typical of the neighborhood

But stores and homes aren’t the area’s only attributes. Within Wilburton is the 150-acre Kelsey Creek Park and the renowned Bellevue Botanical Garden. And by 2023, a light rail station will border the neighborhood at NE Eighth Street and 118th Avenue NE, providing another transportation option.

Compass real estate agent Ann Pierson says part of the appeal in Wilburton is its affordability. “People have been [in Wilburton] a long time; the houses have not really turned over and [been] updated a lot,” she says. It makes this neighborhood more affordable than others that border the downtown area. Wilburton Elementary School opened in the fall of 2018

Pierson says that in the past 14 months, she’s had two young Amazon families that specifically wanted to find a home in this area because of its schools, community vibe and affordable prices. They each ended up buying homes of more than 3,000 square feet for about $1.2 million.

Fun fact: Wilburton’s most stunning attraction, the Bellevue Botanical Garden, is a 53-acre horticultural paradise filled with a wide array of Pacific Northwest plants, along with restored woodlands and wetlands. The garden was started after longtime Wilburton residents Cal and Harriet Shorts gave their home (which houses the visitor center), together with its 7.5 acres of land, to the City of Bellevue in 1981.

ALSO CONSIDER
Woodridge
Directly south of Wilburton is this quiet, well-established neighborhood with mid-century single-family homes, a selection of apartment complexes and a popular community pool. It is also home to the 975-foot-long Wilburton Trestle, the Pacific Northwest’s longest wooden railway trestle. ON THE RISE: The East Link extension of light rail will serve Bellevue’s new Spring District where apartments have recently been completed, but much more  is still to come

More than a decade ago, the City of Bellevue realized that a 16-block commercial area, once home to a Safeway distribution center and Coca Cola plant, was ripe for redevelopment. A new plan for the area, now known as the Spring District, was conceived that included plenty of upzoning and a grid system revamp.

Today, those large-scale changes are finally starting to appear. Hundreds of apartment units have been completed or are under construction, says Bellevue Mayor John Chelminiak. In the future, the Spring District will also be home to REI’s new headquarters, and Facebook may add an office there.

“I do think it will become one of the most sought-after neighborhoods to be in,” predicts Chelminiak. “I look at it as a neighborhood of creativity, where you can live, you can work, you can get around very easily.”

A light rail station opens here in 2023, an appealing addition for home buyers looking for a place where they will have easy access to Seattle. Some retired clients of Compass real estate agent Ann Pierson, who were downsizing, chose to relocate next to the Spring District’s future transit center so that they’ll have easy access to the Seattle arts scene once light rail arrives, she says. “They looked on both sides of the lake and they chose to be in that environment where they could hop on transit and end up at Benaroya Hall with one ticket,” she says.

They’re not alone. Although the area is straddled by SR 520 and I-405, Pierson says that at least two other clients also recently chose the Spring District to live in. The nearby highways make it easily accessible, and redevelopment is transforming it from a commercial area into a high-density, urban community. There will also be a variety of small townhomes and condos in this area, and many are currently under construction.

Fun fact: The Spring District borders 10-acre Lake Bellevue, also known as Lake Sturtevant, a small but noteworthy body of water surrounded by a collection of restaurants and businesses.

ALSO CONSIDER
BelRed
The Spring District is located within this larger area, currently home to Overlake Medical Center and Kaiser Permanente Bellevue Medical Center, along with apartment complexes, a variety of small international shops, restaurants and the popular Highland Community Center, which resembles a log cabin. The area, which was included in the redevelopment plan for the Spring District, is set to see extensive development, including both office and residential buildings, in the coming years.