As our city becomes more dense, people are choosing to live and work downtown

By Niki Stojnic and Hallie Golden As single-family-home neighborhoods across the city densify, people are buying into urbanization, choosing to live and work downtown, and decreasing their square footage in exchange for close access to food and entertainment. The demand has led to a resurgence in condominium construction, with new towers going up around the city and making downtown neighborhoods, like these two adjoining areas, newly appealing. “Condos offer more lifestyle per square foot than single-family homes,” says Dean Jones, co-owner of Realogics Sotheby’s International Realty, referring to amenities that come with many condos—as well as apartment buildings—along with proximity to services, restaurants and other features of urban life. 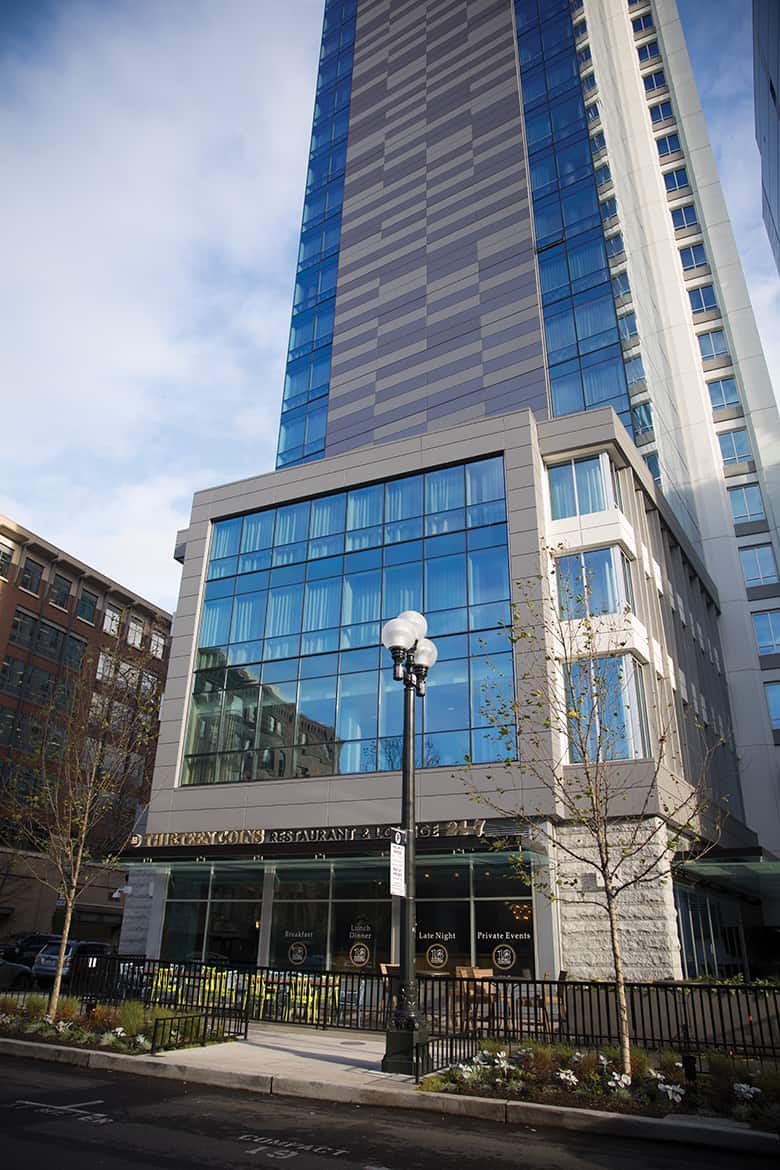 Both Pioneer Square and the Chinatown–International District (CID) have undergone zoning changes that encourage new multifamily developments. Those include Pioneer Square’s Gridiron condominium development, built by Daniels Real Estate and opened in 2018 with 107 studio, one- and two-bedroom units built atop the 1903 brick Johnson Plumbing Building; and Koda Condominium Flats, located at the intersection of the CID and Pioneer Square, slated to open in mid-2020. As of press time, its 200 studio, one- and -two-bedroom units (studios start at about $400,000) were nearly all presold. Demand has driven the conversion of historic single-room-occupancy hotels (SROs) into apartments as well, including The Publix, with studio, one-, two- and three-bedroom units, and the Northern Pacific Hotel, with low-income housing. The family-owned Louisa Hotel is currently undergoing a similar conversion into apartments and is slated to open in 2019. 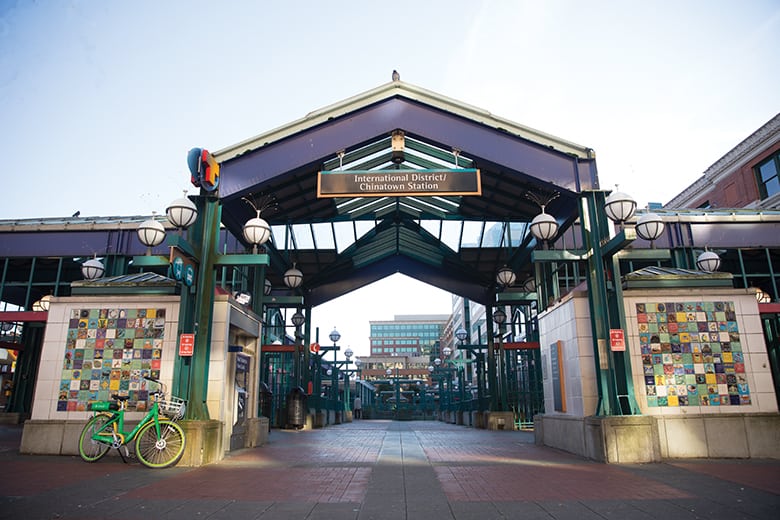 Those who live here have easy access to numerous transportation options, including buses, two Link stations, the Sounder train and Amtrak. Amenities include a variety of new and established restaurants, the Uwajimaya grocery store, many galleries (the area also has some live/work lofts for artists) and other retail options. And for sports fans, both neighborhoods are within easy walking distance to CenturyLink Field and T-Mobile Park (formerly Safeco Field) stadiums. 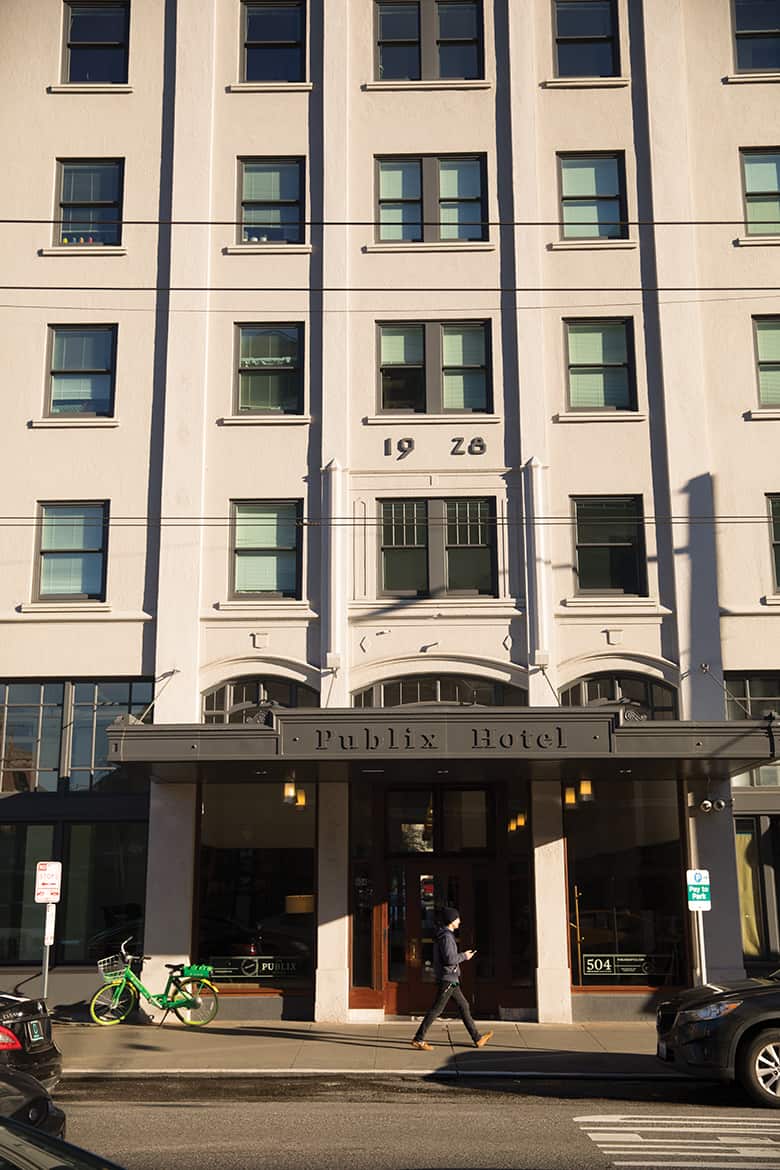 Recent development in the International District/Chinatown includes the Icon apartments and the historic Publix, formerly a single room occupancy hotel which is now offering studio, one-, two- and three-bedroom units for rent

Fun fact: The Louisa Hotel renovations have uncovered Prohibition-era Art Deco murals that were once part of a belowground jazz club; they are the most intact jazz club murals remaining in Seattle. Building owners are raising funds for the murals’ restoration so the artwork can be displayed when the building reopens as an apartment building. ALSO CONSIDER
Waterfront
A new downtown waterfront is set to be born with the removal of the Alaskan Way Viaduct this year; the waterfront redesign by James Corner Field Operations is currently projected to be finished by 2023. There’s no shortage of walkable amenities for condos situated along the waterfront, including Olympic Sculpture Park and Pike Place Market, but eliminating the Viaduct’s shadow and adding broad, open pathways and stairs have the potential to create more of a neighborhood here than ever before. 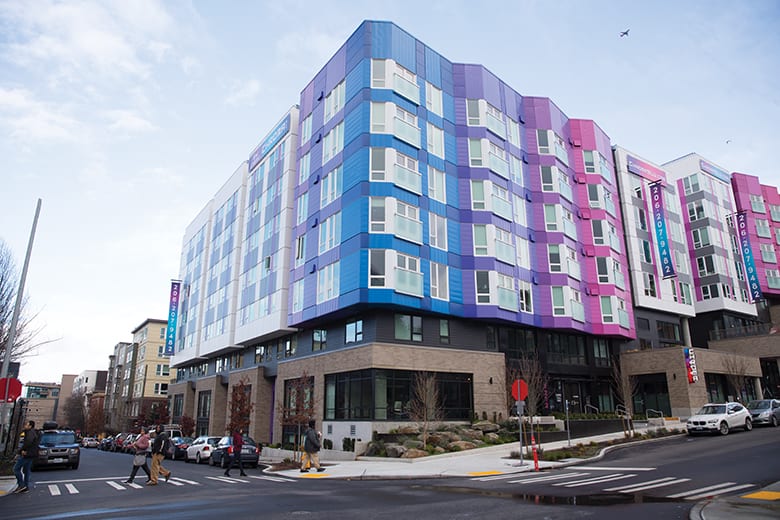 It would be difficult to find a Seattle neighborhood that has changed quite as much as South Lake Union. Originally a home to warehouses and other industrial spaces, in recent years the area has been transformed, thanks to the vision of the late Paul Allen, Microsoft cofounder and philanthropist, who, through his company Vulcan, bought much of the land here and set about redeveloping it. As a residential option, the neighborhood’s biggest selling point—in a traffic-plagued city—is convenience. Those who work here can choose to live here as well. But it’s not an inexpensive community. Rents here average $2,186 a month, according to RentCafé. But residents have easy access to many big-city amenities, including dozens of restaurants and bars—many recently opened—such as the popular Bar Harbor, Brave Horse Tavern and Portage Bay Cafe, along with a large Whole Foods store, REI, the Museum of History & Industry, the Center for Wooden Boats and the shores of South Lake Union. Residents can walk or catch a bus to nearby Seattle Center, and to downtown, which is also accessible via the 1.3-mile South Lake Union line streetcar. Drivers heading out of town have quick access to I-5 from Mercer Street. A plaza, surrounded by buildings occupied by Amazon, displays the Amazon symbol

Fun fact: As its name suggests, South Lake Union sits on the edge of the 580-acre Lake Union. What is not quite as well known is the fact that the seemingly idyllic water is home to as many as 75 shipwrecks. Teams of divers have been working for years to identify and map all of the many sunken historic boats that point to the waterway’s history as an industrial hub. ALSO CONSIDER
Lower Queen Anne
This nearby neighborhood offers a large selection of condos and apartments, as well as proximity to Seattle Center and the Gates Foundation’s headquarters. As one of Seattle’s oldest neighborhoods, Lower Queen Anne has a beautiful selection of eclectic buildings from the 1920s, along with newer models built in the past 20 or 30 years.