Though the light rail stations are not set to open until 2021 in the North End, real estate agents have already started featuring this mass-transportation option in their advertisements 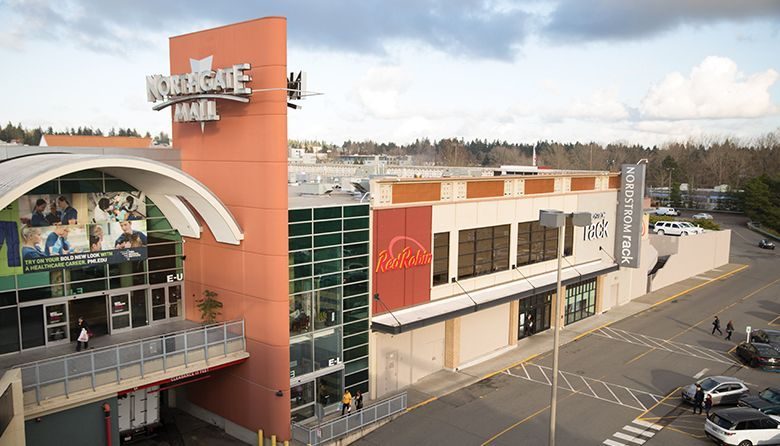 Whether it’s construction of a light rail station or blueprints for new housing units and a large park, change is in the air in Northgate, a North End neighborhood perhaps best known for its shopping center, movie theater, apartment and condo complexes, and a modest stock of single-family housing, much of it built between the 1920s and the 1970s. There are still many older homes in the area

Last summer, the owners of the 55-acre Northgate Mall revealed a large-scale plan that includes tearing down 60 percent of the shopping center to make way for a hotel, four residential buildings, four mixed-use office towers and a fitness facility, all centered around one idyllic park. The site also is expected to get an official National Hockey League training facility and community ice rinks by 2021. A newer home in Northgate

And then, of course, there’s the light rail station, currently under construction right by the mall. Although it’s not set to open until 2021, real estate agents have already started featuring this mass-transportation option in their advertisements. North Seattle Community College is one of the neighborhood’s amenities

Each of these changes is sure to boost Northgate’s overall appeal, says Stefan Hoerschelmann, a Windermere real estate broker. The community already has easy access to Interstate 5 and State Route 99. The section on the west side of I-5 is also next to both North Seattle College and multiple elementary and middle schools, including Cascadia Elementary, a school specifically for highly capable students on N 90th Street, which opened in the fall of 2017.

These developments at the mall site will give residents a convenient mass-transportation option, along with an accessible, pedestrian-friendly hub within walking distance. So far, these plans haven’t had a noticeable impact on the neighborhood’s housing pricing, says Hoerschelmann. But he doesn’t expect this to last long.

The Northgate light rail station, easily visible from I-5, is scheduled to open in 2021

“I don’t think we’re seeing the price kick in from that quite yet, but I think we’re going to in the next bit,” he says. Which, for potential buyers, means now is a good time to consider this area.

Fun fact: The neighborhood was named for Northgate Mall which opened in 1951 and was anchored by the Bon Marché (now Macy’s). It was among the first such malls in the nation. When it opened, Northgate was actually north of the city limits. The area wasn’t annexed by the city until 1954.

ALSO CONSIDER
Maple Leaf
Sandwiched between Lake City Way and I-5, Maple Leaf—filled with a combination of modest single-family homes and apartment complexes—is the perfect combination of accessibility and walkability. Its residents have easy access to SR 99 and will soon be able to take advantage of the Northgate light rail station. But the neighborhood also has a wide array of small, beloved businesses and restaurants, including the longtime games and learning store Math ’n’ Stuff & Magnificent Toys and the tasty Chinese restaurant Snappy Dragon. The neighborhood is also home to Maple Leaf Reservoir Park and Thornton Creek. SLEEK AND PURPOSEFUL: The newish Rooster apartments, on NE 65th Street, is in the commercial center of the Roosevelt neighborhood.The ground floor includes the popular Portage Bay Cafe

Though the light rail isn’t set to start running in Roosevelt until 2021, the transportation amenity is already having a noticeable impact on this area. According to Windermere broker Stefan Hoerschelmann, for the past two years, clients have specifically selected homes in this neighborhood because they know light rail is coming. Roosevelt has a robust mix of older homes

Many of them are millennials looking to avoid the dreaded Seattle traffic or simply to not have to rely on a car.

Roosevelt is a great neighborhood for both of those things. Life’s necessities are within easy walking distance, including a Whole Foods Market and a wide array of restaurants, such as the popular breakfast and lunch spot Portage Bay Cafe, trendy Broadcast Coffee Roasters and the Vietnamese hot spot Bol Pho Bistro.

Although Roosevelt Way and its selection of businesses can at times become very busy, take just a few steps down one of the many side streets and the hubbub dies away. It is replaced by a quiet community of single-family homes, many built in the 1920s. And if you’re looking for a nice walk or picturesque spot, Green Lake, Cowen Park and Ravenna Park are close by. Recently, Roosevelt has added an assortment of apartment complexes, an attractive housing option for young couples who don’t need a lot of space and aren’t ready to buy. Given the neighborhood’s convenience and walkability, Hoerschelmann says he’s noticed that some buyers are more than willing to select a home in this neighborhood even if it’s pricier and a bit smaller than those in nearby neighborhoods. Fun fact: The neighborhood’s name came from a 1927 Community Club naming contest, which resulted in people in the community deciding to honor President Theodore Roosevelt’s legacy by naming the neighborhood after him.

ALSO CONSIDER
Green Lake
Less than a 15-minute walk west of Roosevelt, this popular neighborhood has a retail area with a growing variety of restaurants, outdoor retailers and fitness facilities; a PCC market; a community center; a wide array of housing options; and easy access to I-5. But of course, its biggest selling point is the lake. With a 2.8-mile path around the lake, it’s a popular spot for jogging, biking and everything in between.