This energetic neighborhood has seen a lot of accelerated change over the past few years. Mainstays El Centro de la Raza—a hub for the Latinx community established in 1972 in a 1904 schoolhouse—and Hilltop Red Apple Market have been joined by the likes of Homer, a restaurant opened in 2018 by former Sitka & Spruce chef Logan Cox; Perihelion Brewery; and Fresh Flours Bakery & Cafe, all serving a neighborhood with close proximity to the Chinatown–International District and downtown. New mixed-use developments have densified the community of single-family homes and old brick apartment buildings, which reflect layers of development from the 1910s through the 1950s. The underground light rail station brings you right up to Beacon Avenue S, which serves as the commercial spine of the neighborhood, and in among the neighborhood’s eateries, you’ll find quirky businesses like the print shop Day Moon Press. Located just a short walk south of the station is sprawling Jefferson Park, which occupies both sides of the street. The park features unparalleled views of the city and the Olympic Mountains, and includes a public golf course, which has been an inviting community mainstay since 1915 and has seen a few famous faces among its wooded greens. 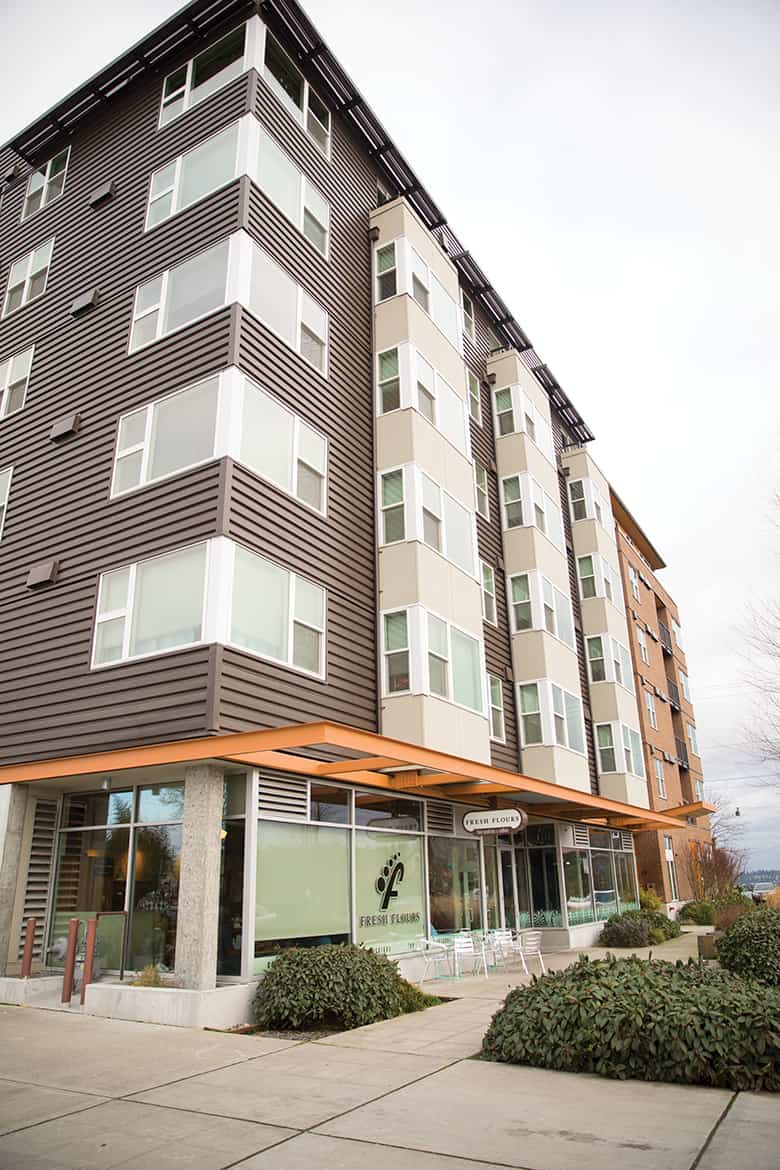 A mixed-use development with a Fresh Flours bakery

Fun fact: The iconic brick Art Deco–style building visible atop the north
end of this neighborhood today houses Pacific Medical Centers, but was once a U.S. Marine Hospital and more recently, the headquarters of Amazon. Many homes here have beautiful views

ALSO CONSIDER
Mid–Beacon Hill and South Beacon Hill
Growth and affordability have pushed homebuyers farther south. West of Jefferson Park, you’ll find the 7-acre Beacon Food Forest, an urban edible garden open to the public for foraging. It has thrived as one of the largest such food projects in the U.S. Also in the area is MacPherson’s Fruit & Produce, where the community meets and greets. Farther south on Beacon Hill is where, according to John L. Scott agent Moose Math, there has been a nearly $100K drop in home prices from those of North Beacon Hill. Cyclists and walkers alike enjoy nearby Chief Sealth Trail, a 3.6-mile paved, open, hilly route that runs from these areas southward to Kubota Garden. On any given day, there’s a perpetual sense of busyness in Columbia City, whether it’s crowds lining up at well-known cafés, such as Columbia City Bakery and Super Six; shopping at the large, seasonal (May–October) midweek farmers’ market; or locals enjoying the amenities at Genesee Park and its off-leash dog area.

Link light rail, which arrived in 2009, boosted the neighborhood’s renaissance, igniting an interest among builders who in recent years have added hundreds of housing units (almost 300 between 2016 and the first quarter of 2018), many along Link’s path, which runs beside the Martin Luther King Jr. Way S thoroughfare in this neighborhood. Encore, a 96-unit property, is scheduled to break ground this spring, one of the few condo projects to be built on this route. Many apartment complexes have sprung up along this street over the past decade; Rainier Vista was one of the earliest, a redeveloped 1940s public housing site originally built for defense workers. It’s about a half-mile walk east from the Link station to Columbia City’s compact commercial area, centered on Rainier Avenue S, between S Genesee and S Dawson streets.

The neighborhood continues to grow and evolve; treasures include a movie house that was saved and reborn in 2012 as Ark Lodge Cinemas, and PCC almost tripled its size and moved from Seward Park to anchor a mixed-use apartment complex in Columbia City’s commercial core in 2015. John L. Scott real estate agent Moose Math knows the area like the back of his hand; he lives near Seward Park (a long walk or easy bike ride away) and has a remote office in adjacent Hillman City (see sidebar). He loves the energy and diversity of Columbia City. A PCC is one of the area’s new attractions

Both families and young professionals without children are drawn to the area’s mix of modest older single-family bungalows and new modern boxes and, more recently, to its townhomes. The townhomes are especially popular with renters who are ready to buy and those who move here from other neighborhoods, like Capitol Hill, says Math. Those buyers want to keep the urban amenities they love, and townhomes in Columbia City allow them to do that for a little less cash than what’s available in neighborhoods like Capitol Hill. The area is a draw for Microsoft employees as well—they can pick up the company’s Connector shuttle bus in a few Columbia City locations.

ALSO CONSIDER
Hillman City
From Columbia City, travel a bit farther south on Rainier Avenue S and you’ll soon come to a growing Hillman City, which has become a destination for those crowded out of adjacent Columbia City. Increased density is helping to grow Hillman’s own commercial core, which includes NW Peaks Brewery, Big Chickie restaurant and a CrossFit facility. The neighborhood’s modest homes are an extension of the styles found in Columbia City, many dating to the early 1900s, and there is brand-new development as well.