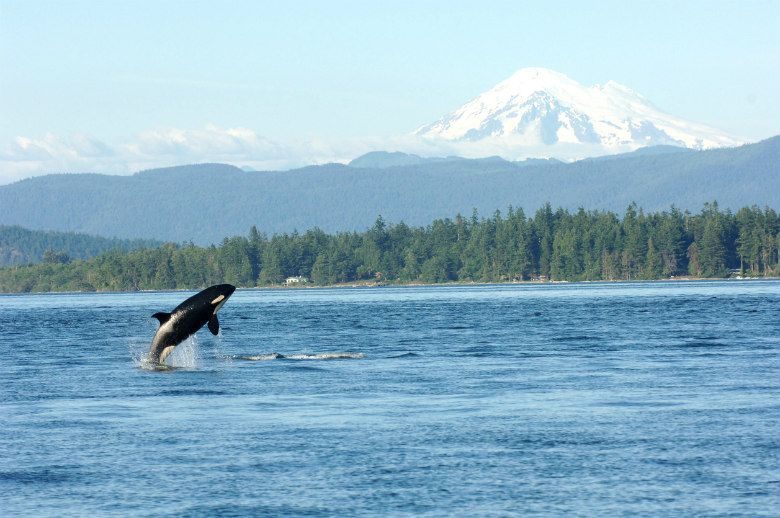 With cold water and plenty of prey like salmon to feed on, Puget Sound is the go-to place for whale watching, meaning Seattleites don’t have to travel far to get a glimpse of these majestic mammals that call the sound their home.

While plenty of commercial tours will charter you around the sound, whale watching does not always require a boat. Alisa Lemire Brooks, the whale sighting network coordinator for Orca Network (orcanetwork.org) says that many can be seen from the shore with a pair of binoculars.

“If you know what to look for, you can usually identify whales from the shore from fins and exhalations,” Brooks says.

Knowing where to be and what to look for can be the hardest part of spotting whales from the shore, especially for first time viewers. Luckily, Brooks dished on some of her favorite viewing spots and expert tips.

Point Defiance
You don’t have to leave the mainland to whale watch. The multiple viewpoints along Five Mile Drive in Point Defiance Park offer views of south Vashon Island, which orcas often circumnavigate when they travel down the sound. Humpback whales can also be seen in this area as some extend their stay in the sound for the winter. (Tacoma, 5400 N. Pearl St.)

Point Robinson
Take a quick ferry trip over to Vashon Island and see these orcas up close, as they usually come less than 50 feet away from shore at this Maury Island spot that has easy beach access. (Vashon, 3705 SW Point Robinson Rd.)

Point No Point
Facing the Admiralty Inlet to the north and Puget Sound to the south, Brooks highly recommends Point No Point. “North Kitsap is a great hotspot for all species, but especially orcas as they pass close to shore as they cut that point coming into the Sound,” she says. (Hansville, 9009 Point No Point Rd. NE)

Bush Point
While viewing at South Whidbey State Park requires a Discover Pass and a hike, the public beach at Bush Point to the south of the park offers the same views of the Admiralty Inlet. (Freeland, E. Spyglass Dr.)

Thomas Hladky Memorial Park
More commonly known as Whale Bell Park, this park’s main feature is a brass bell (donated to the city of Langley by Orca Network) that visitors ring when they see a whale passing through the Saratoga Passage. Brooks recommends the east side of Whidbey Island for viewing gray whales that usually hang out around Camano Island. (Langley, 100 Anthes Ave.)

Possession Point
Brooks recommends this spot for viewing humpback whales, as they have been spotted in the shallow waters feeding on krill. These whales were almost hunted to extinction in the sound, but have made a comeback in recent years. (Clinton, 8343 S. Franklin Rd.)

Mukilteo Beach
If you cannot make it on the ferry to Whidbey, this mainland beach near Lighthouse Park offers a view of the east side of the island across the narrow channel, making it a good viewing point for gray whales. (Mukilteo, 609 Front St.)

Alki Beach
This West Seattle beach is a popular spot for seals and their pups, leading to the presence of Bigg’s or transient orcas. Bigg’s orcas differ from the resident orca pods that follow the salmon chum runs, as they eat mammals. (Seattle, 1702 Alki Ave. SW)

Looking for more spots on the shore that are good for whale watching? Check out Orca Network’s Whale Sighting View Points map to see hotspots as far north as the San Juan Islands.

Be ready to go
Following whales’ paths is a race against time, which is why Brooks suggests following blogs like Orca Network that track daily sightings and planning a specific viewpoint to head to. “Being familiar with the areas you are going to cuts down on time,” she says. “The less time you have to spend getting to the shore, the better chance you have of seeing a whale.”

Look for body features and exhalations
While large blows are obvious indicators of a whale surfacing, paying attention to fins and tails that come with them can help indicate the species. Orcas have tall dorsal fins while humpbacks have a smaller, chunkier looking dorsal fin. Grey whales have no dorsal fin, but their blows usually appear to be in a heart shape. If you are lucky enough to see a breach (when two-thirds of a whale’s body comes out of the water) be sure to look for any distinguishing markings such as white undersides on orcas and patches of barnacles on gray whales.

Pay attention to connections with other species
As whales feed, gulls usually begin to swirl around overhead to snag any leftovers. If you see birds hovering around one location, watch the area for any dorsal fins or tails. Brooks says it also doesn’t hurt to watch where whale tour boats are stopping.