A Bold New Waterfront Is Coming to Seattle Soon

After more than 65 years of being cut off from downtown Seattle, a new waterfront is set to unfurl, dramatically changing the city’s landscape 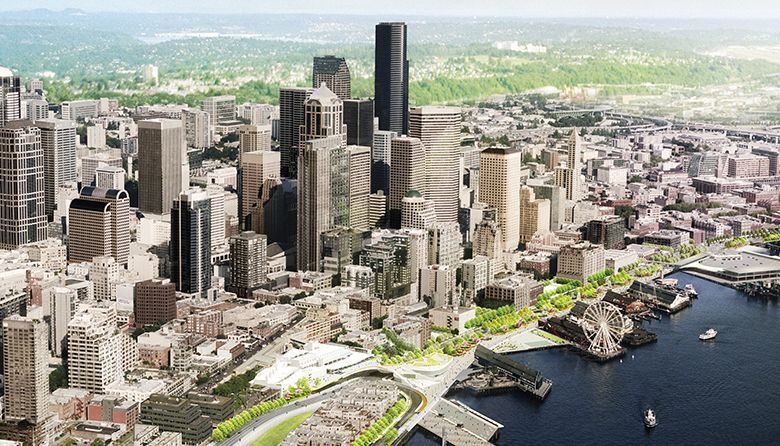 All images by James Corner Field Operations, courtesy of the City of Seattle

This article appears in print in the March 2019 issue and is part of our Seattle Waterfront feature. See PDF version of waterfront map here. Click here to subscribe.

Seattle’s new downtown waterfront—a combination of projects so monumental in their collective scope that it’s hard to think of them as a single program—is finally coming into view. Squint just a little as you look up from Alaskan Way toward Pike Place Market’s glass-walled MarketFront development—opened in June 2017—and you can almost see what will be the grand, terraced Overlook Walk swooping gracefully toward a waterfront that will finally be reconnected to downtown after the demolition of the hulking Alaskan Way Viaduct.

Along the central waterfront, just below the new walkway, will be an audacious expansion of the Seattle Aquarium, complete with a 350,000-gallon shark tank that will be visible to people walking through the plaza below. To the south: a reconstructed Washington State Ferries terminal and an actual beach, where people can walk right up to the water. And all along the 26-block length of the project will be a protected bike lane, a landscaped pedestrian promenade and public spaces hosting year-round events, from ice skating in winter to the return of public concerts (which ended in 2005) at a reconstructed Pier 62.

“For the first time, we will really connect Pioneer Square, the historic piers, Pike Place Market and the aquarium—they will all be basically part of one parks system,” says Marshall Foster, director of the city’s Office of the Waterfront. “That is something that doesn’t exist today, and it will thread those neighborhoods together,” making the waterfront a single, unified downtown district, rather than a series of disconnected destinations.

Other elements of the project are less visible, but no less ambitious. A new, seismically stable seawall, finished in 2017 and expected to last at least 75 years, includes salmon-friendly “habitat benches” and translucent sidewalk segments cantilevered over the water, which, planners say, have already shown some success at nudging the threatened fish to use the waterfront as a migratory corridor. A full-service restroom, supplemented by two Portland Loo public toilets with security features that discourage drug use and loitering, will be staffed 24 hours a day. A new green stormwater system will manage runoff from the entire length of the downtown waterfront. And of course, the Alaskan Way Viaduct replacement project will permanently bury State Route 99 underground, fundamentally changing the look, and sound, of the waterfront.

Cary Moon, a onetime mayoral candidate, a longtime waterfront resident and cofounder of the People’s Waterfront Coalition, was an early skeptic of the city’s plans to tear down the Viaduct and divert its traffic through a tunnel. Although Moon still thinks the city should have spent its money on transit, rather than the $3.3 billion tunnel project, she says she’s “100 percent psyched” about what’s happening on the waterfront. “I’m really proud of the city,” Moon says. “This plan is really big and ambitious and bold, and the city has stuck with it.”

Foster notes that once the Viaduct comes down, people who come downtown will no longer have to cross a physical and psychological barrier to walk down to the water. “It’s going to change the mental map of the city,” he says. For businesses on the waterfront that have endured years of closures and disruption from construction and traffic detours, this will be the calm after the storm—a welcome boost in accessibility that could improve their long-term viability.

The project to rebuild the waterfront arguably began almost two decades ago, back in 2001, when the Nisqually Earthquake forced the city, region and state to come up with a plan to replace the damaged, seismically vulnerable Viaduct. Years of debate over how (and whether) to replace it ended in 2008, when then Governor Christine Gregoire, Mayor Greg Nickels and King County Executive Ron Sims decided to bury the road in a deep-bore tunnel, opening up acres of new waterfront land for parks, a new roadway and private redevelopment.

Years of additional debate ensued. In 2010, after an international competition, the city chose New York City–based James Corner Field Operations to design the waterfront park. When local architects and others criticized Corner’s initial proposal as too grandiose, Corner scaled back, and then back again—eliminating hot tubs, gondolas and floating swimming pools—to a plan with a more modest, but still grand walkway; flexible spaces for outdoor activities, such as a winter ice skating rink and a mini soccer field; and a wide waterfront pathway flanked by hundreds of trees. GETTING CONNECTED: Via the Overlook Walk, pedestrians will be able to walk from the Pike Place Market’s new MarketFront expansion to the waterfront, traveling over a rebuilt Alaskan Way, with beautiful views along the way. At the western edge will be the Seattle Aquarium’s new Ocean Pavilion

“We have really learned a lot, and we’ve gone through a healthy set of iterations and steps to hone in on the right scale to make a really gracious connection and be as efficient and cost effective as it can be,” Foster says. Significantly, the park’s plan includes ongoing maintenance, which will cost more than $6 million a year (about $4.8 million from the city; and $1 million‒$2 million from the nonprofit Friends of Waterfront Seattle, created in 2012 to help fund and operate the park).

Homelessness is an issue that has come up again and again in discussions, particularly as waterfront property owners debated a special taxing district, known as a local improvement district, that will raise their taxes to reflect the increase in their property values gained from proximity to the park. Former Seattle mayor and waterfront resident Charles Royer, who supports more aggressive enforcement of the city’s anti-camping laws on the waterfront, says people worried that “the waterfront could open and the first tents could go up the next day.”

Friends of Waterfront Seattle director Heidi Hughes says she’s well aware of the concerns. Hughes says her organization’s plan to operate and program the park (in partnership with the city) strikes a balance between enforcement and deterrence, using programming and outreach to supplement security. Hughes says Friends will provide its own “ambassadors”—similar to the Downtown Seattle Association’s Downtown Ambassadors—who will walk through the park, talking to visitors and providing outreach to homeless residents.

Perhaps more important to the safety and security of the park, Hughes says, will be making sure every space is occupied and used year-round, a strategy that has already proved successful in Westlake and Occidental parks downtown. “Rather than thinking about the central waterfront as a fallow space where events pop up, there will be all sizes of programming of various scopes and scales,” including yoga and tai chi classes, and festivals and concerts that draw thousands of people. Last summer, Hughes says, the Friends group implemented a small-scale version of this approach and saw arrests and citations drop significantly.

Ultimately, the success of the waterfront will depend on whether people show up—not just for events and concerts, but to live, dine, shop and walk along the new waterfront beach and promenade. Ivar’s CEO Bob Donegan, whose own flagship restaurant at Pier 54 had to shut down for nearly a year during seawall construction, says he’s bullish about the waterfront’s future.

“One of the things I’ve looked at in the past, to see if a public project is successful, is whether the private sector is investing alongside it,” Donegan says. “If you look from Alaskan Way up to First Avenue, from the stadiums to Pike Place Market, there has been more than $1 billion in private investments over the last four years.” These investments include the newly developed, 16-story Cyrene Apartments, currently appraised at $98 million; Beacon Capital Partners’ $13 million purchase, and subsequent $186 million sale, of the Maritime Building at Alaskan Way and Marion Street; and developer Martin Selig’s 2018 purchase of a small office building and parking lot on Western Avenue and Columbia Street for a record $44 million. Even with the tunnel under construction, Donegan says, “people are coming back.”

By 2023, if all goes according to plan, those buildings will look out on a revamped waterfront full of people and things to do—one that’s equally accessible to waterfront property owners and anyone who happens to wander down on their lunch break to take a look at the view.