This residential tower's 352-units will be for sale, not rent. 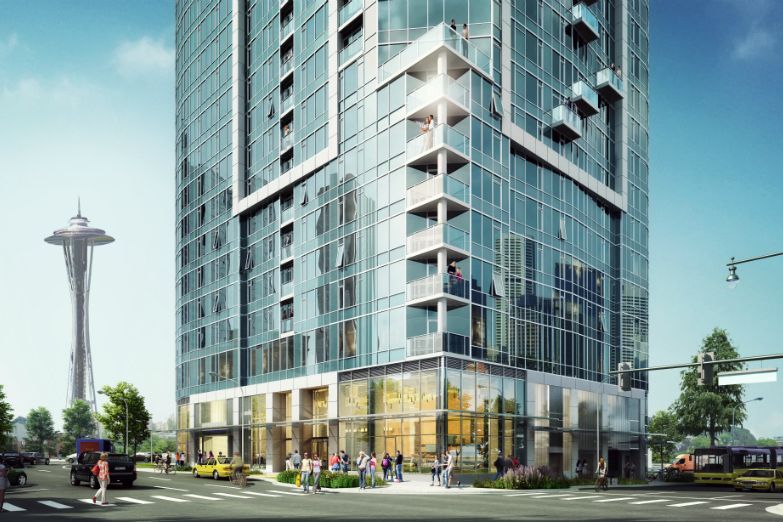 Representatives of Walnut Creek, CA-based Laconia Development and Realogics Sotheby’s International Realty recently announced that a planned 352-unit, 41-story residential tower, now under construction at 600 Wall Street in downtown Seattle, will be delivered as condominiums for sale instead of apartments for rent. The luxury condominium tower is named “SPIRE” in homage to the iconic Space Needle – the subject of non-obstructed views offered from two of three elevations on this triangular development. It is itself, a tall and slender tower that will soon deliver opportunities to own a home in a market where more than 91% of the estimated 30,000 multi-family housing units added to downtown Seattle during the current decade were developed for rent.

“In recognition of the dynamism of Seattle and the limited home ownership opportunities downtown, I am announcing that 600 Wall Street will now be built, not for rent, but for sale as condominiums,” said Paul Menzies, CEO of Laconia Development.  “I view SPIRE as the powerful explanation point at the north end of the rapidly developing 6th Avenue.”

Menzies notes that the unique high-rise design occupies a full city block at the northern edge of the high-rise zoning, and provides broad view corridors down Wall Street, 6th Avenue and Denny Way without fear of new developments. Most importantly, the significant down zone to the immediate north and northwest provides dramatic vistas from Lake Union to the East and across Seattle Center and the Space Needle to Elliott Bay and the Olympic Mountains in the backdrop. “It’s quintessentially Seattle,” said Dean Jones, President & CEO of Seattle-based Realogics Sotheby’s International Realty. “SPIRE is on point and will meet with eager homebuyers awaiting the next evolution in urban design. Laconia will deliver much needed inventory for individual purchase. We are clearly experiencing a pivot in the development cycle.”

The second half of 2017 evidences what may be a paradigm shift in consumer trending from rent to buy. According to research by O’Connor Consulting Group, apartment demand throughout King and Snohomish County fell by 4,500 units (unexpectedly) during the second half of the year while sales of single-family and condos in the same region swelled by more than 5,000 units – rising from 40,825 homes closed in 2016 to 45,949 in 2017.

Jones believes renters are increasingly positioning themselves for capital appreciation, mortgage interest deductions and attainable home ownership options before being priced out—many prospective buyers are citing fears about rising home prices and ongoing interest rate hikes. He notes that consumer confidence and rising home prices are key for presales, when savvy buyers can purchase a new home in advance of closing and moving in. Downtown Seattle is the fastest-growing large city in the US expanding by 114,000 persons since 2010. Since then, the average apartment rent in the City of Seattle rose by 93%, according to the O’Connor Group report. Given the lack of for-sale inventory, downtown Seattle witnessed median pricing of resale condominiums increasing by more than 13% so far in 2018 year-over-year, according to NWMLS data.

Seattle has experienced a run on its limited availablity of for-sale inventory, especially at lower price points, which can be financed with a conforming loan limit (non-jumbo mortgage) with as little as 5% down payment (3.5% FHA), while also qualifying with lower FICO scores and enjoying lower interest rates.

Jones suggests new condominiums are an important contributor to attainable homeownership options. Currently, there are just two active high-rise condominiums being marketed for sale with just 48 new homes available out of 496 units being built for sale and occupancy by 2020. Other condominiums recently announced have already secured 95-percent reservations with back-up positions. SPIRE is the next high-profile condominium development announced in downtown Seattle, which is now under construction with occupancy slated for Fall 2020. Laconia acknowledged that SPIRE was initially conceived as a condominium during the past cycle until the last recession hit and construction financing was not available. The project was then planned as a luxury apartment until reverting back to the original plan to sell as condominiums. In preparation for sale, Laconia instructed the architectural team at VIA to redesign certain aspects of the project and increase all ceiling heights to now feature a market-leading minimum of 9-feet – up to 10-feet on the top floors. At the same time certain units were redesigned to offer larger living spaces while significant upgrades were made by Robin Chell Design to amplify the interior design of the units, including European cabinetry, quartz countertops and Miele appliances (with gas cooking) and oversized, solid-core interior doors that range from 7-to-8-feet tall, in keeping with the building’s decidedly vertical stature.

The residential offering will include the following unit mix options: The SPIRE Sales Center is now under construction at 2218 5th Avenue just a short walk south of the development site. The public sales debut is scheduled for Fall 2018 with registrations for priority presales now being accepted at SPIREseattle.com. Until further notice, a preview opportunity is also being hosted at RSIR’s New Development Preview Center located at 2715 1st Avenue in Belltown, open daily from 11 a.m. to 5 p.m.

Want to learn more about how on-point the timing of SPIRE is? Check out a recent FutureCast Forum piece on the “Seattle Pivot” and what it means for in-city homeownership.