Can the Heart and Soul of the Central District Survive Redevelopment?

Gentrification threatens to erase the cultural underpinnings of Seattle’s once predominantly black neighborhood. 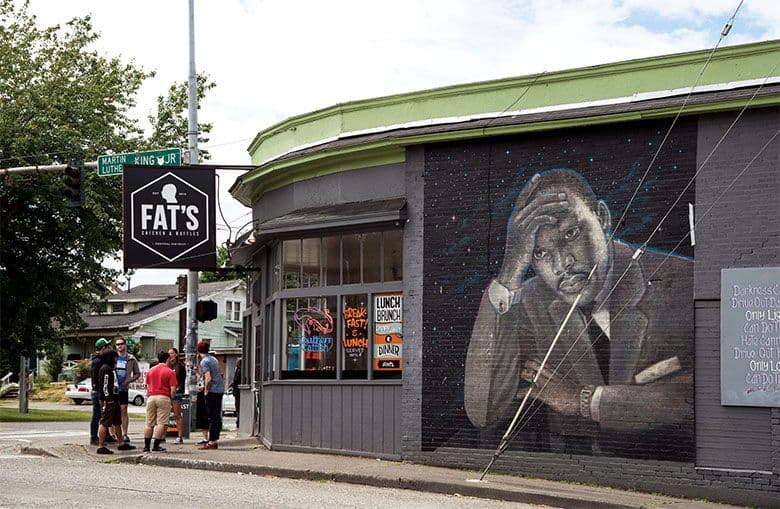 It took a mixture of luck and dogged persistence for hairstylist De Charlene Williams to secure a small-business loan. It was 1968 and Boeing was about to begin the infamous round of layoffs that would slash its workforce from 142,000 to 56,000. Local banks were therefore willing to give loans to almost anybody who could promise some cash flow.

That situation gave Williams an opening but not a guarantee; guarantees for African-American women were nonexistent. So, the 25-year-old entrepreneur started calling on lenders. Five banks said no. Then 10. Then 25.

After 29 rejections, Williams got creative. She used only her first initials on an application to Metropolitan Federal Savings and Loan. “[The underwriters] didn’t know if I was a woman or a man, but the bank manager gave me a break because Boeing just had a big layoff.”

On that day at least, gender anonymity and a $7,500 down payment made Williams the owner of a hair salon.

Even with financing in hand, life didn’t get much easier. Williams opened De Charlene Beauty Shop & Boutique on the day Martin Luther King Jr. was assassinated in Memphis. Shortly after opening, her windows and glass doors were smashed. Still, Williams embarked on a mission to stabilize the lives of her black neighbors in the Central District.

“I wanted to help all the other black women in the area,” she recalls, “help them get out of the kitchens, get on their feet and do something productive.” Williams works solo these days, but at one point, she employed 13 people.

Williams opened her shop during a period of intense racial tension, both nationally and in Seattle. Today, her shop is a landmark in yet another instance of race-related tumult: the gentrification of urban areas traditionally populated by people of color. Williams is one of the few remaining black business owners in the neighborhood and her single-story salon is surrounded by construction equipment and boxy, six-story apartment buildings.

Redevelopment has long been a thorny subject in the area, which was once three-quarters black, but the rhetoric has intensified. Such is the case when Seattle’s most prominent developer enters the market. 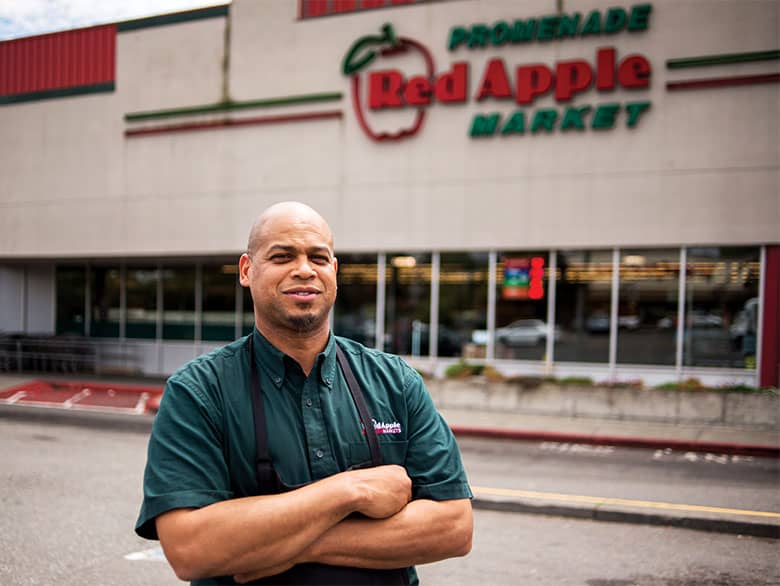 Photograph by Navid Baraty. Promenade Red Apple manager Michael Moss outside of the longtime grocery store soon to be redeveloped.

A knock at the door interrupts a conversation with Michael Moss in his office at the Promenade Red Apple, the anchor tenant in a shopping area at 23rd Avenue South and South Jackson Street. He opens the door to a young man, maybe early 20s, in a crisp black ball cap and T-shirt, jeans and bright white sneakers. He wants a job. Moss delivers the bad news: “We’re going to be closing down soon.”

In February 2016, Vulcan Real Estate paid $30.9 million for the Red Apple parcel and one across the street. If all goes according to plan, construction on a new mixed-use apartment complex will begin early next year.

Moss isn’t a typical grocery-store manager. An ordained minister, he’s as concerned with community outreach and the fate of the neighborhood’s mentally ill as he is with SKU performance and margins.

He organizes backpack giveaways, community barbecues and coat drives. The store has developed a loyal following among a customer base that has been consistently declining. In 1970, some 40,000 black people — comprising 73 percent of the neighborhood — occupied the single-family dwellings in the Central District. They’d make routine trips to the Red Apple, stocking up on ingredients like collard greens and smoked turkey necks that were all but impossible to find elsewhere in Seattle. Today, census estimates suggest about 5,000 black people live in the area — roughly 14 percent of the population.

Black people didn’t settle in the Central District willingly. Discriminatory lending practices, known as redlining, meant racial minorities could only find housing in the most blighted neighborhoods of big cities. In the 1930s, the Home Owners’ Loan Corporation, a government-sponsored product of the New Deal, graded neighborhoods on an A-to-D scale; lenders used the grades to gauge risk. Seattle’s Central District received a D grade; the reasoning was summed up in one sentence: “This is the Negro area of Seattle.”

Mortgages were hard to come by in the area. And when they were granted, they came with high interest rates.

To offset the lack of capital, the Central District became a hub of community experimentation. The local Black Panthers chapter sponsored a community health clinic. A fleet of 12-passenger buses shuttled folks around for a dime per trip. Local residents were providing urban services before the city thought to arrange any for them. And, as has been the case in redlined areas across the United States, the pragmatism of the Central District also yielded a creative benefit. The neighborhood had a booming jazz scene in the 1920s and 1930s. Rock guitar virtuoso Jimi Hendrix called the Central District home. Resident Anthony Ray would eventually dub himself Sir Mix-a-Lot and spark a hip-hop movement that continues today.

After World War II, the white middle class lived in suburban neighborhoods. But the children and grandchildren of these “white flight” participants wanted something else: to live and play near their downtown workplaces. So, beginning in earnest during the 1990s, white Seattleites started looking at the Central District, where they found affordable “starter homes.”

These homes were inexpensive because banks wouldn’t issue home-improvement loans in the Central District. “So, as Euro Americans received a bonus from institutional racism,” Seattle University law professor Henry McGee Jr. wrote in a 2006 analysis of the neighborhood’s changing demographics, “African Americans were presented with an escape hatch to less expensive, far more desirable housing than they had experienced when they were ‘redlined’ in areas now open to them as racial attitudes changed.” An urban-suburban flip ensued: White people moved to Seattle; black people left for places like Renton and Kent.

The Great Recession further soured residents’ fortunes, and then they couldn’t keep up with property-tax and rent increases after the recession. In 2009, homes in the Central District fetched a median price of $385,000, according to the Northwest Multiple Listing Service. Through April of this year, the median sale price was nearing $700,000 as opportunistic developers stoked the trend.