Can Seattle Scientists Save Orcas from Extinction? 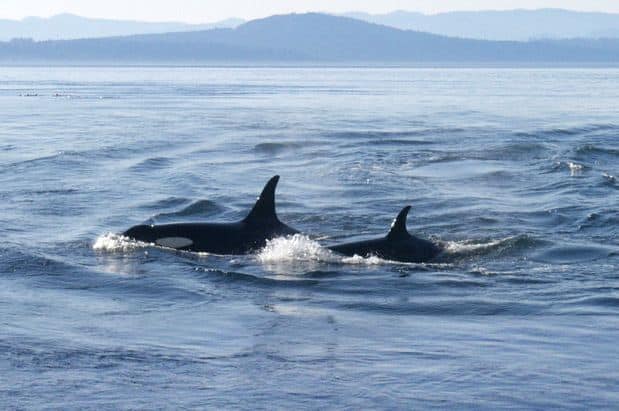 This article originally appeared in the June 2012 issue of Seattle Magazine.

This February, a young killer whale washed up on the chilly shores of southwest Washington’s Long Beach Peninsula.

Scientists looking at the markings on its dorsal fin and saddle patch (the dark gray splotch behind the dorsal fin) identified the whale as L112, a female just over 12 feet long born in 2009. She belonged to the L Pod, one of three pods (with K and J) in a genetically linked clan researchers call the Southern Residents, which travel primarily in the Salish Sea, the waters including Puget Sound north to the Strait of Juan de Fuca and the Strait of Georgia in British Columbia. Although not all killer whale groups worldwide are troubled, these three genetically distinct species are endangered.

Identifying the dead whale was a fairly simple task, but another question was more complicated: What had killed her? The many possible answers reveal the number of threats looming for our region’s largest predator, and the challenge researchers and environmentalists face in trying to bring resident orcas back from the brink. “These orcas have been studied for 35 years now,” says Brad Hanson, wildlife biologist at the National Oceanic and Atmospheric Administration’s Northwest Fisheries Science Center in Montlake. “But there are some gaping holes in our knowledge.”

L112 wasn’t the first orca to strand in recent memory—in fact, another, from a different, offshore population, stranded near Long Beach in November. But the death of L112, known to many by the name Sooke, was unusual, as it was the first of the Southern Residents to beach in U.S. waters since April 2002.

At this writing, there are only 87 Southern Resident killer whales, and their vocalizations, diet and behaviors distinguish them from all other orcas in the world. (Other killer whales in our area are either Northern Residents from British Columbia; transients, which pass through the region and feed mainly on other marine mammals; and offshore orcas, which are mostly coastal.) While the Southern Residents travel as far south as central California during the winter, they spend their summers in southern British Columbia and the San Juan Islands. We start seeing the J Pod in our inland waters in May, with K’s and L’s following in June. (We still don’t know the exact scope of their winter range, a focus of current studies at the Northwest Fisheries Science Center.)

PCBs are considered the most likely to affect orca immune systems, leaving the animals more susceptible to diseases, parasites and fungi. They are also harmful to their endocrine systems, which regulate hormones, interfering with reproduction.

As a young female with a potential to breed, Sooke’s loss means one less chance to nudge Southern Residents toward survival. Local orcas have been listed under federal law as an endangered species since 2005. Since then, growing the numbers of Southern Residents has become vital work for local scientists and environmentalists. To be delisted under federal regulations, the clan must maintain an average population growth rate of 2.3 percent a year for 28 years—one scenario posed by the recovery plan sets the number at around 155 animals in 2029, or a little less than twice the number we have now.

Scientists think there may have been that many, or more, Southern Residents breaching in local waters in the mid-20th century, before the arrival of entrepreneurs who saw dollar signs in captured orcas and plundered their numbers. During the late 1960s and early 1970s, more than 50 orcas were taken from the waters of south Puget Sound and off south Vancouver Island, using harpoons, nets and small bombs. Reports of the time describe a depressing, chaotic scene, as Southern Resident orcas, which bond for life in matrilineal family networks, were chased apart. Some were killed. Those that survived the roundup were taken to aquaria for public entertainment. (Only one of those whales, known as Lolita, survives, at the Miami Seaquarium in Florida.)

Since then, protected by law, local orcas have become adored icons, flaunted in brochures, attracting tourists for whale-watching trips, delighting ferry riders as they pop up unexpectedly, fin slapping the water or launching 6,000 to 12,000 pounds of blubber and muscle into the air. Orcas can live to be 80 to 100 years old, and avid whale watchers can identify resident orcas by name.

But the whales have not rebounded as hoped. Today, the J Pod is increasing in numbers, but K and L pods are decreasing. “There are more deaths, and fewer births,” says Hanson. By contrast, the Northern Resident orcas, another fish-eating clan, which ranges from Washington state to southeast Alaska, have been steadily increasing. The endangered species recovery plan identifies several likely reasons for orca troubles, but one floats to the top of many biologists’ lists: the decline of chinook salmon.

“I would put their search for scarce, polluted salmon front and center,” says Scott Veirs, oceanographer and professor at the Beam Reach Marine Science and Sustainability School, a marine science program associated with the University of Washington. We have long known that our local orcas are salmon eaters. More recent studies have shown Southern Resident whales are even more specialized than that, favoring chinook salmon over all other salmonids. (Their summer diet is about 75 percent chinook; the rest is mostly chum salmon.) The 87 Southern Resident orcas consume anywhere from 290,000 to 800,000 chinook annually (the range is large because their winter diet is undetermined). The fish are another endangered species. “Some people think we should make more effort on chinook availability,” Hanson says. “Chinook are a very high priority for us, but many of these runs are endangered themselves.”

Howard Garrett, cofounder of Whidbey Island’s Orca Network, a nonprofit raising awareness of the issues facing Southern Residents, says some salmon (he would like to see 1 millon) will have to be set aside for the orcas. “We are going to have to allot a quota for the Southern Residents, just like we do for commercial, recreational and tribal fisheries,” he says. Equally urgent is the need to continue the cleanup of salmon habitat, restoring the streams and rivers where salmon spawn.

Not only does a dearth of chinook likely limit the resident orca population, but years with low chinook numbers may leave the whales more susceptible to diseases and other health dangers. At the University of Washington’s Center for Conservation Biology, scientists have been trailing orcas by boat from a distance and collecting their floating scat for analysis. This noninvasive method of data gathering allows them to find out if a whale is pregnant, whether or not it has eaten recently and other important health information. By studying stress hormones, called cortisols, the scientists have found a correlation between orca stress levels and the presence of many boats. But whether or not the whales have enough to eat affects those stress levels, too. When the whales are hungry, their cortisols increase around traffic, and when they are well-fed, they do not.

Contaminants in the food supply also affect the health of killer whales. “There are hundreds of contaminants in the tissues of killer whales,” says Dr. Peter S. Ross, who studies marine mammal toxicology at Fisheries and Oceans Canada in British Columbia. The contaminants travel to the water from multiple sources (air pollution, runoff, discharge from water treatment plants) and end up in the bodies of salmon; the killer whales eat the salmon and pack away the pollutants in their flesh. Many of these chemicals are no longer used in the U.S., but persist in the air, water and food supplies. “It’s a legacy effect,” says Ross. Although the insecticide DDT was banned in the 1970s, it is the top contaminant in Southern Residents, which also carry 140 types of PCB, a chemical once used in heavy industry, and about 30 types of PBDE, a flame retardant now being phased out, which is found in cars, furniture, computers and textiles. PCBs are considered the most likely to affect orca immune systems, leaving the animals more susceptible to diseases, parasites and fungi. They are also harmful to their endocrine systems, which regulate hormones, interfering with reproduction.

When the whales have limited food supplies, the concentration of these chemicals in their bodies increases as their blubber decreases. We don’t yet know if that makes them more sensitive to chemicals. We do know that when whales nurse their young, many of those pollutants are dislodged from fat stores and passed on to their calves, just as in humans. Tests have shown juvenile orcas carry higher contaminant levels, particularly of PBDEs.

Finally, killer whales are struggling in a noisy waterway. Orcas survive by sound, using it to feed, orient and communicate. The Southern Residents hunt for fish by sending out clicks from their heads and listening for the quiet echo of that sound off the swim bladder of a fish. The sound reflects off the bladder (an air pocket) in a way that is characteristic of the size and species of that fish. Potentially, then, ambient noise could make it harder for killer whales to hunt. Veirs cowrote a study that revealed that orcas raise their voices in proportion to the increase in noise in the water around them. Even small vessel noise, such as that from whale-watch boats, can cause an acoustic response. “We call it the cocktail party effect,” says Veirs. “When we walk through a loud room of other talking people, we raise our voices.” We don’t know if raising their voices matters to the orcas’ survival, but it could. Recent regulations have set stronger limits on how closely boats can approach orcas.

Navy sonar is a source of louder, potentially more dangerous noise, as military boats train in inland waters and off the Washington coast. Veirs says the Navy happens to train in the same midfrequencies, 2–10 underwater kilohertz (kHz) used by Southern Residents for their whistles and calls. “That’s the sweet spot for their communication,” he says. Such a sound could distract or permanently deafen a nearby killer whale. For this reason, more than a dozen U.S. and Canadian groups, including the American Cetacean Society, Beam Reach and People for Puget Sound, have urged the U.S. and Canadian navies to cease testing sonar in the Salish Sea. Listening in with underwater microphones called hydrophones, Veirs and others have heard explosive sounds. Shock waves from such a blast could potentially kill a whale that was too close to the source.

At this writing, a sonar blast or other underwater explosion are two of many possibilities on the table as a possible cause of Sooke’s death. The initial necropsy revealed trauma as the cause of death, but was otherwise inconclusive. “The biggest thing we found was the extent of the bruising; you could see it around the head and the chest and on the right side, and on the top of the lungs,” says Jessie Huggins of Olympia’s Cascadia Research Collective, a nonprofit that researches marine mammals. Researchers found no broken ribs and no signs of disease. “It looked like a healthy whale that had been through quite a bit of trauma,” says Huggins. A CAT scan revealed further soft tissue damage, but not what killed the orca. Local biologist Ken Balcomb says it looked like Sooke had been “blown up.”

Meanwhile, in a small victory for Sooke’s family members, the U.S. and Canada recently held transboundary meetings to bring together fisheries and killer whale biologists to discuss how many fish orcas need. “That’s a bright light in this otherwise gloomy situation,” says Veirs. “The killer whale never had a seat at the table before.”