Chew on This: Where Do You Stand on Aplets & Cotlets? 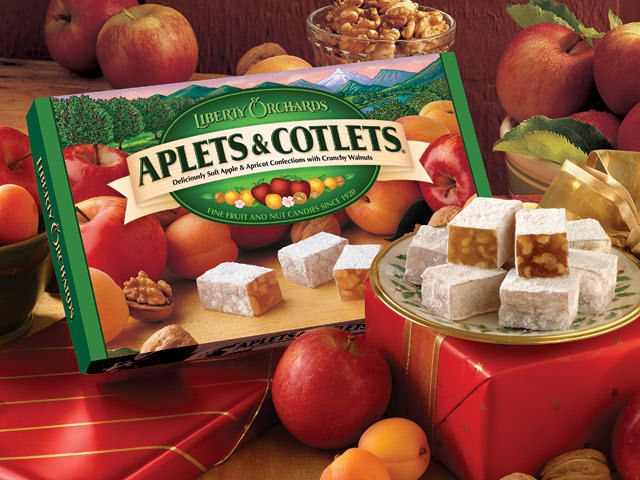 National Public Radio broadcast a story last week about a Northwest institution that many people here take for granted. We’re used to hearing about the groundbreaking achievements of regional brands like Starbucks, Amazon and Microsoft. But Aplets & Cotlets?

To many of us, Aplets & Cotlets are those little bricks of sweetness dusted in powdered sugar that people give as gifts when they’ve run out of other ideas. Or in my experience, elderly ladies like my grandmother who offered them up with a full tea service, when people still did such things. Many of them grow stale in the cupboard. They are as unhip as you can get.

Except maybe not. What we know as an Aplet is essentially what most people know as Turkish Delight, an uber-sweet fruit, honey and walnut candy with Middle Eastern origins. This version comes from Liberty Orchards in Cashmere, WA and was created, we learned, by two Armenian immigrant orchardists. The factory is a popular stop for people crossing the Cascades.

The company has experimented, too. Check their online offerings and you can see Aplets & Cotlets that are made from other fruits, or without nuts, even without sugar. One addition I remember was the Grapelet, the official candy of Expo ’74 in Spokane. I don’t think they ever caught on.

Aplets & Cotlets have been selling in one version or another for nearly a century. The NPR story adds a little mystique by calling them a “regional secret,” and gives them big props for exemplifying “the very best of American food culture—immigrants who refashioned their childhood treats by using the foods of their new home.” That is cool, I agree.

Food writers in recent years have also extolled the virtues of other Northwest food inventions that we locals think of as unremarkable—chicken teriyaki, for example, or the Seattle Dog. If you asked me to name an iconic regional candy, I would name Almond Roca a hundred times before Aplets & Cotlets would come to mind.

I’m convinced that more are purchased than ever eaten. In fact, if president Trump decided to build a border wall with Canada, I wager he could do worse than laying the foundation with Aplets & Cotlets that are likely sitting in cupboards.

I know they have their fans—I’ve heard from them on Twitter. When I dissed the confection recently, tweeting that nobody actually eats them, one local writer responded, “Knute’s right—we don’t eat them. We inhale them. When they’re on sale at Bartells.” Much as I don’t share his passion, there are few tweets about sweets more Northwesty than that.