City Scaping: Finding a Balance Between Green Transportation and Safety 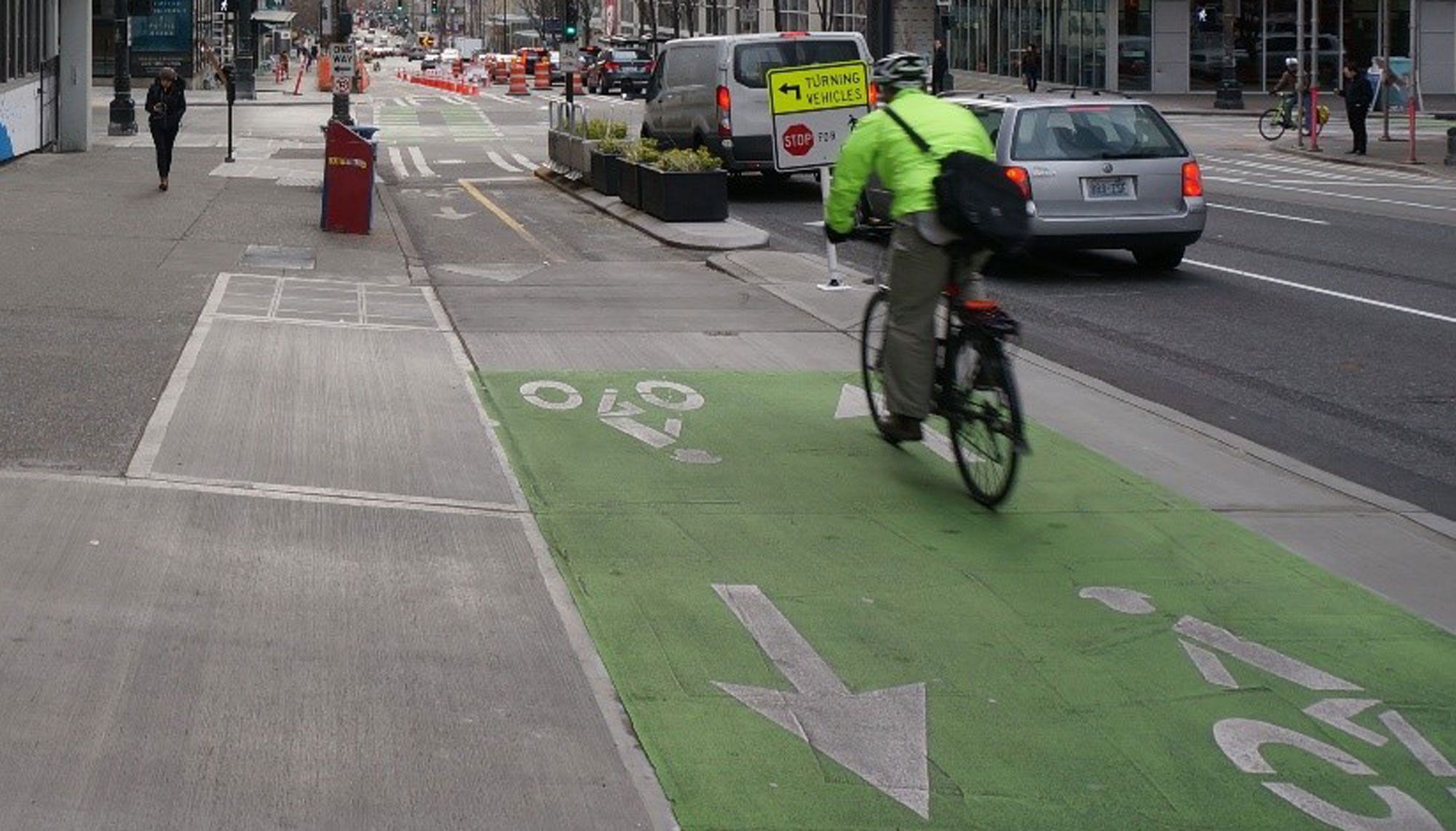 As quickly as Seattle is growing vertically (I laughed when I recently saw three construction cranes parked in almost the exact same spot in South Lake Union), it is undergoing an equally rapid metamorphosis at ground level. Commuting to downtown from Ballard has become a daily obstacle course for me with all the construction going on, regardless of how I vary my route. When I head down Fifth Avenue, there’s the usual dodging in and out of those lanes under the monorail. On Seventh, it’s a game of stop and go due to ongoing construction near the Amazon Spheres. But the most dramatic streetscape changes have been on Second Avenue and along Pike Street with the addition of the new bike lanes. Second Avenue used to be my quick route through downtown. But recently, driving down this street is like stumbling over the mound of shoes perennially piled up in the entryway of my home. (Wait, am I in the left-hand turn lane or are these cars ahead of me parked?!)

Several years ago, when I first saw similar bike lanes in Vancouver, British Columbia, it seemed so civilized that separate bike lanes existed and were cordoned off by thick concrete barriers into their own two-way mini roads protected from car traffic and—in an oh so very Pacific Northwest touch—those barriers also doubled as planters. These lanes had their own cute mini stop lights too. I like these lanes not only for providing a safe lane for cyclists but because they set the expectation that cyclists will follow the same rules of the road as motorists. I am all for green transportation options, but I’m even more for safety (of cyclists, pedestrians and drivers), especially after seeing more than one cyclist blow through a stop light only to become enraged when the car they cut off honks at them.

I’ve since gotten the hang of navigating our newly landscaped Second Avenue, but now the question is: If you build them, will they come? I have yet to see more than a few cyclists at a time in the bike lanes on my morning commute but it is only February as I write this. So, for the cyclists out there willing to brave Seattle streets (Godspeed) and trails, we offer a primer on bicycle etiquette for one of our city’s most popular designated bike paths. Find it in this month’s Field Guide column on our back page.

Elsewhere in this issue you’ll find other stories that also celebrate the great outdoors. You’ll meet the trail blazer who is on a mission to encourage people of color and underrepresented communities to become more engaged with our parks and wilderness spaces. You can pick out some camping gear that handily doubles as earthquake survival equipment. And for the tech-loving and space-challenged green thumbs—it is the start of gardening season!—you can start dreaming about a whole new way to garden.

Even our city’s recently opened Amazon Spheres seem to be a shrine to nature (or maybe the Spheres are actually some sort of preservation experiment for when we’re all living on Mars?). Regardless—Happy Earth Day, and don’t forget to get outside.