Transit advocates aren't happy about the terms of the unusual deal. 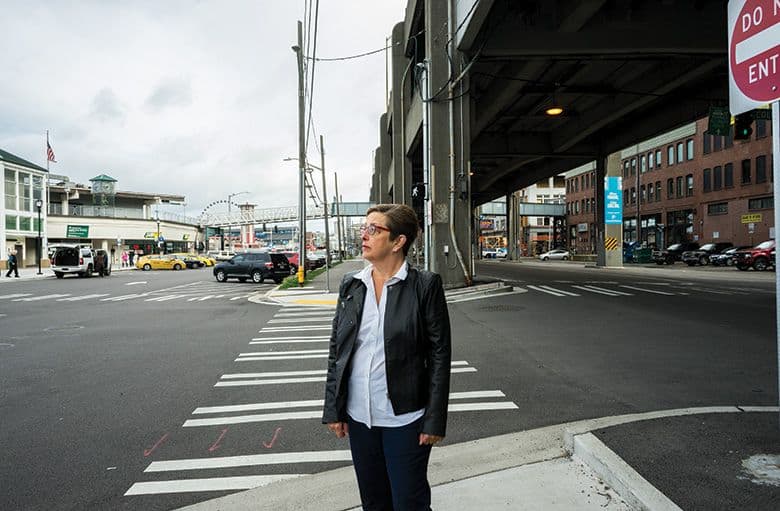 This past march, Leslie Smith found herself in an unusual position.

For years, Smith, executive director of the Alliance for Pioneer Square, had criticized the City of Seattle for its plan to build what she describes as a “nine-lane highway” on Seattle’s waterfront, near the downtown ferry terminal, after the Alaskan Way Viaduct comes down. Instead of expanding the roadway, Smith had supported a proposal to move most of the 600 buses that use the Alaskan Way Viaduct off the waterfront and onto streets in neighboring SoDo (including S Lander Street, and First and Fourth Avenues), to enable the city to make do with a narrower roadway on the waterfront.

Smith has been one of the most vocal critics of the project. As the leader of a group whose mission includes promoting tourism in Pioneer Square, she spent years trying to convince city leaders that the planned 102-foot-wide roadway would cut off Pioneer Square from downtown, defeating one of the stated purposes of the tunnel project: to better connect the city with its waterfront.

In November, after spending nearly three years cajoling, testifying and negotiating with the city, Smith’s organization appealed the city’s environmental impact statement for the project. The legal challenge wasn’t in itself unusual. Plenty of groups have complained about the city’s plans for rebuilding the downtown waterfront. Part of the reason for this width is that the new tunnel will be two lanes narrower than the current viaduct, and won’t include any downtown exits. As a result, the new surface Alaskan Way will function much like a regional highway, with as many as eight lanes for buses, freight traffic and cars (plus an extra lane in some places for parking). What made Smith and the alliance’s case unusual is what happened next: Instead of fighting back, the city settled, striking a closed-door deal, with a private organization that will determine how thousands of Seattle residents and visitors experience the waterfront for decades to come.

The city’s Office of the Waterfront—along with King County Metro and the Washington State Department of Transportation (WSDOT)—agreed to narrow the road to 79 feet, eliminating the two transit lanes when the West Seattle light rail station opens in 2033, reducing the need for most bus routes between downtown and West Seattle. Until then, Smith agreed to accept the 102-foot-wide roadway as originally planned, with lanes for general traffic, parking and ferry queues, plus those 600 buses, which will run in transit-only lanes.

“We actually have come up with what we think is kind of an elegant solution to what will be a pretty wide roadway for another decade,” Smith says.
In the settlement, Metro agrees to run no more than 195 buses a day on the new Alaskan Way surface street after light rail opens. The tunnel is scheduled to open to traffic in 2019, and the waterfront project, including the roadway, will open three years later. And the ultra-wide road will stand between Pioneer Square and the waterfront for about a decade.

To understand how this settlement came to be, it helps to know a little history. When the city and state agreed to replace the Alaskan Way Viaduct with a deep-bore tunnel with no downtown exits, that created a problem: how to accommodate transit, freight and general traffic—including the cars lining up for the ferry terminal—as well as bicyclists and pedestrians, all on a surface street.

Smith supported moving Metro buses to SoDo, eliminating the need for transit lanes on the waterfront. Transit advocates and King County Metro rejected that idea, noting that those rerouted buses would have to contend with more than 20 traffic lights. The city agreed to two transit lanes.

That, more or less, is how the city ended up with a 100-foot-wide roadway right next to Pioneer Square, cutting off the historic district from the waterfront as surely as the Alaskan Way Viaduct has since 1953.

Sitting in the vast conference room of a Fifth Avenue building that overlooks the Viaduct itself in the distance, Marshall Foster, director of the city’s Office of the Waterfront, says, “The issues with the width of the road aren’t lost on anyone.” Mayor Ed Murray established the office in early 2014 to oversee the redesign of the downtown waterfront once the Viaduct comes down.

“The fundamental reason that we’re in this awkward place, I think, is that we’re [experiencing] growing pains as a city,” Foster continues. “We’re in the middle of this big transit transition, where we’re bringing on a huge volume of transit service, but we’re struggling to do it fast enough” to have light rail and buses integrate seamlessly, leading to an awkward 10-year period when they don’t.

Transit advocates aren’t thrilled with the settlement. Shefali Ranganathan, executive director of the pro-transit nonprofit group Transportation Choices Coalition, had hoped for a compromise that would allow buses to stay on the waterfront while also narrowing the roadway, calming traffic and making it safer for pedestrians. She also says she had expected to be at the table when the fate of the waterfront was being decided.

“I just find it really strange that an important public decision is being made with this sideways approach of a legal challenge, where the only stakeholders are government agencies and the person challenging the environmental impact statement,” Ranganathan says.

Ranganathan also questions the assumptions Metro made in preemptively limiting the growth of transit service on the waterfront to 195 buses a day. “We don’t know what transit use will look like 10 years from now,” she says. “We see transit ridership growing at a record pace, and to limit ourselves 15 years into the future based on expectations around buses now seems short-sighted.”