Even better than a billboard, the Space Needle is a prominent way to get a message across. 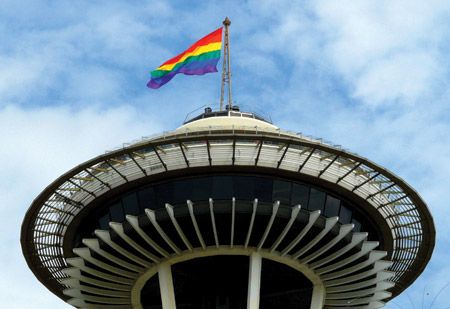 Since its construction, we’ve been decorating the Space Needle to commemorate special occasions.

A crustacean ascended the Space Needle in October, 1985 as a publicity stunt for Fish and Seafood Month.

In July, 2008, the Sub Pop flag was flown in honor of the local record label’s 20th anniversary.

Squatch helped paint a Sonics mural atop the Needle in June, 1996.

Not even 18-foot tall letters painted in October, 2006, could make the city slogan “metronatural” a good idea.

King Kong paid the Needle a visit in October, 1987, for a United Way fundraiser.

Every Christmas, a tree made of lights tops off the Needle