The Condo Conundrum: 10 Reasons Why There’s a ‘For Sale’ Shortage in Seattle

Despite the city's rapid growth, it's not easy to find a condo in Seattle. 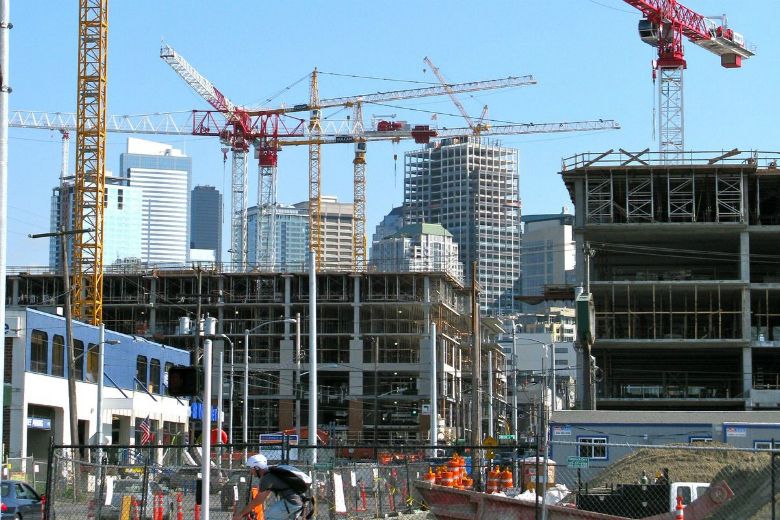 Seattle is the fastest-growing large city in the US with home prices rising more than any other metro area in the nation. That means developers are building new condominiums at a record clip, right?  Nope, it’s actually the opposite. There is currently a real shortage of in-city condominiums, resulting in high median home prices, rising by 19-percent year-over-year in November 2017 to $660,000 – about the same value as the median home price in King County. And 94-percent of the projected 27,000 new housing units to be built in downtown Seattle this decade will be for rent and not for sale, leaving many to scratch their heads. This topic was recently explored by The Seattle Times and King 5 TV News as prospective buyers have literally camped out overnight to book their opportunity to own. So, what gives? Here are ten reasons why consumers consider condos, but most developers don’t.

It’s a common misconception that developers are in social service, delivering housing as needed to balance supply and demand. The reality is that most developers focus on the highest returns with the lowest risks. So, unless building new condominiums fits this profile, it’s not going to get built. If building and selling an apartment building offers a similar return with less risk, then that wins the day.

The Washington Condominium Act provides certain consumer protections for buyers participating in a presale of a new condominium. The theory is good but in practice the Act “overprotects” purchasers with unattainable warranties of quality and severe restrictions on purchaser deposits. During the last cycle, litigation was the norm, not the exception. The result is that as this cycle begins, nearly everyone is afraid to work with condos – developers, lenders, architects, contractors, and attorneys.

Fixing legitimate warranty items is one thing, but many developers feel extorted by the demands of the contingent plaintiff lawyers who cash in on large settlements with insurance companies (sometimes earning fees larger than the actual repair work).

Source of the litigation? Implied warranties of quality:

The inherent risk of condo defect litigation substantially increases the cost of building condos, which is effectively passed onto the consumer:

In many other mature condo markets, like Vancouver, BC or Miami, FL it’s common for presale buyers to deposit 20, 30 or even 50-percent of the purchase price of a new development, investing significant “at-risk” monies that are often released to the developer to help fund the construction of the project. Not so in Washington, which means the developer has relatively little security in the buyers knowing they can walk away at any time before closing with limited recourse (and that money can’t be used to fund the construction). Here are the specific issues:

Experts believe that if the risks for buyers and developers were more balanced, there would be a much greater number of condominium projects built and supply and demand would be in balance.

Developers have experienced meteoric demand to acquire quality, new construction apartment buildings in what the Urban Land Institute cites as the best investment market in the US, according to their 2018 Emerging Trends in Real Estate survey. That means there are often multiple, willing and able investment groups prepared to pounce on an apartment tower that is offered for sale. And having multiple bidders means that the price paid to own the rental tower rises to a point that is similar to the value of a condominium alternative.

It takes developers many years to conceive and construct a high-rise community. Most want to invest in the long-term holding of this asset instead of selling it out. King 5 TV News recently covered a story on a Taiwanese developer taking a chance on Seattle’s condo future. With Seattle following similar investment trends to both West Coast peer cities of Vancouver, BC and San Francisco, CA – the common goal is to own these trophy assets within a rising market. A similar trend can be witnessed with individual investors for condominium units, however most developers will limit the percentage of units being sold to buyers that are not intending to reside in the condominium as a primary residence or second home. Selling too many “investor” units could complicate the mortgage options for the building and adversely affect the other residents.

With typical rents in Seattle rising 50-percent since 2010, it’s good to be a landlord. So, for many developers, the idea of pre-selling two or more years before closing the unit sales means leaving a few years of appreciation on the table. With rents, the final rental rate is booked at the time of occupancy and with most leases being just 12 months long, there’s an opportunity to increase rents each year. To be sure, Seattle is now considered the fifth most expensive large market in the US, according to US Census data with the median rent rising $92 per month to $1,448 in 2016. Merchant builders have figured out that high rents and low cap rates makes the business of developing and selling rent stabilized apartment towers very profitable without the marketing costs or risks associated with condominium development.

Housing demand in downtown Seattle (and throughout the Puget Sound region) has been greatly influenced by job growth within the blossoming tech sector. Many of these relocating employees are drawn by the prospects of high incomes, no state income taxes and the opportunity to live and work within a vibrant city on the rise. Most of these youthful recruits came of age during the past decade and witnessed the boom and bust of the past market cycle. They paid attention during the global credit crunch that may have affected their older siblings or parents. As most preferred to rent, Millennials skipped a housing cycle and also missed out on the equity gains of recent years. That said, many of these consumers are now incubating as would-be buyers in apartment towers waiting for their opportunity to own a slice of the expanding skyline. That assumes, of course, there will be inventory to buy.

With all the booming development in Seattle, it’s of little surprise the costs to deliver new projects is rising at 6-8-percent per year. When presale requirements from construction lenders demand selling a condominium a year or two before delivering, the revenues get set while the construction costs can remain variable, exposing the developer to risk. A primary benefit for buyers to participate in presales is to realize this increase in pricing during construction, however that means the developer’s only ability to benefit is to raise prices on the unsold homes.

10. Presales Are Relatively New in Seattle

Seattle’s urban renaissance is relatively young. Its high-rise zoning, known as the Center City Plan, was only adopted in 2006. That provided just a few years of development before the Great Recession shut down the demand and developers struggled to get construction financing (and consumers found mortgage lending equally troublesome). So, just as Seattle was building a head of steam for condominium development, it closed out and was later replaced by a boom of apartment building. This means most local consumers and brokers have, perhaps one or two market cycles of experience with presales. In the most recent cycle, the difference between presale values to resale values, represented 20-30+ percent increases (note these investments were secured by just a 5-percent deposit). If more consumers knew the advantages of presales, the demand would be even higher, encouraging developers to take the risk to reap the rewards.

These headwinds to condominium development don’t mean there isn’t a market for the product. In fact, the market pendulum has swung fully in the other direction in favor of for-sale housing, but like all cycles, the early bird gets the worm. This was the case with NEXUS, a 389-unit condominium being developed by Vancouver, BC-based Burrard Group at the corner of Minor Avenue and Howell Street in downtown Seattle. When the much-anticipated project hit the market in March of 2017 more than 70-percent of the units were presold within a week of its debut and some eager buyers even camped out overnight to secure their slice of the skyline. “The Washington State Condominium Act is so focused on protecting consumers – it works too well and effectively scares away a lot of developers,” says Kerry Bucklin, Principal of Bucklin Evens Law, LLP., a condominium attorney that works with developers. “I suspect that legislation may eventually change, but until then, condos will be few and prices will increase.”

Some market pundits are concerned about the crisis of affordability in downtown Seattle housing noting only 57 resale units listed for sale in a city of more than 70,000 urban residents. Most notably, there are only 7 homes actively available at price points below $700,000. The median asking price of available resale homes is nearly $1.4 million, according to the Northwest Multiple Listing Service.

“It can take up to four years or more to move from initial concept to final closing with high-rise development,” adds Dean Jones, President and CEO of Realogics Sotheby’s International Realty. “So, the reality is developers can’t respond that quickly to opportunities in the market.”

Jones points to several new condominium offerings that are in early stages of design and development, however that supply isn’t expected to deliver until at least 2020. He notes more than two-thirds of the new condo inventory being constructed for earlier occupancy has already presold.

Dean Jones, President & CEO of Realogics Sotheby’s International Realty is also a founding member of The FutureCast Forum, a collaborative of independent opinion leaders who explore current and projected market fundamentals that are materially influencing the Seattle/Bellevue metro area. Founding members and guest columnist provide timely insights on the state of the economy; commercial, residential, and retail development; evolving demographics; wealth management considerations; government policies; lifestyle trends and international interests that are reshaping our skyline into a global city on the rise. For more information, visit Seattlein2020.com.